OFF THE PACE: TOP MIDLANTIC STORIES OF 2021

The thoroughbred racing game, as any bettor or participant will tell you, is full of excitement and variability. Fortunes are made and lost in an instant; heroes and goats swap positions by the race.

The year ending today was no exception: there was plenty there to sink your teeth into. What were the biggest moments of the year in Mid-Atlantic racing? Here’s my list:

The historic Stanton oval had been owned by the Rickman family for 38 years. In November, though, the track was sold to Clairvest Group, a Canadian investment firm, and a newly formed subsidiary of Rubico Gaming, run by “experienced gaming investor Thomas Benninger.” The buyers bought both the casino and the racetrack. As of this date they have not disclosed in detail what their future plans are for the facility. 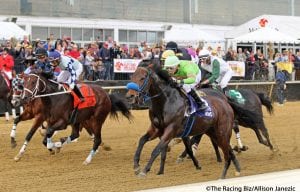 The hard-working newcomer was North America’s leading apprentice rider in terms of number of wins. Among those wins: his first stakes victory, on Red Hot Mess in the White Clay Creek Stakes at Delaware Park for trainer (and girlfriend) Chelsey Moysey. At the end of the year both John and Chelsey had moved to Oaklawn Park. John’s year may lead to an Eclipse Award.

The career milestone for this journeyman rider fittingly came on a John Robb-trained horse, In the Loop, at Delaware Park on a Monday race that was otherwise fairly nondescript. This jockey/trainer combination has accounted for many a win in recent years, including successful runs with horses like Street Lute and Anna’s Bandit. Xavier’s steadiness and hard work have been just as important in achieving this goal as his riding talents.

Although this historic win occurred in Erie, Pennsylvania, many will remember that the bulk of Pino’s career was spent on the Maryland and Delaware circuit. He became just the 10th North American jockey to achieve 7,000 wins and announced he would retire.

8) The Return of Colonial Downs

Covid put the kibosh on the 2020 season at the Virginia oval, but the track bounced back this year. The total handle for the 21-day meet exceeded $46 million dollars and the average daily handle of $2,231,765 set a record for the facility.

7) Pace makes the race in the Delaware Handicap

One week earlier, Crazy Beautiful, with Mike Smith up for Kenny McPeek, dominated the G3 Delaware Oaks, winning by six.

It is hard to say who had the most remarkable achievement on this October night at Charles Town. Owner David Raim had an unbelievable five-win night on the nine-race card. Trainer Jeff Runco had seven winners. However, the highest win total of the night was achieved by jockey Arnaldo Bocachica who finished first in eight of the nine races.

Call it a dead heat – and a historic night. 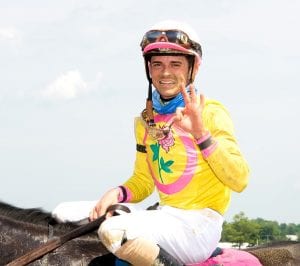 The prestigious Grade 2 event for sophomore fillies took place on its traditional Friday before the Preakness. Though there was a limited crowd because of Covid precautions, that the race returned to its normal day and month was certainly nice to see. The Mike Maker-trained Army Wife, ridden by Joel Rosario hugged the rail mid-pack stalking the leaders before making an initial move on the backstretch. Rosario then guided the horse to the two-path to take the lead heading for home.

Prior to 2021 John Curran had called races at Delaware Park for 37 years and Keith Jones had done the same in Philadelphia for 34 years. Retirement opened up their jobs for Josh Brown at Delaware Park and Chris Griffin at Parx. They proved to be fine additions to the local racing scene, but it still seemed strange not to hear John and Keith after all these years.

In the Grade 1 Haskell at Monmouth Park, Hot Rod Charlie drifted in badly, causing Midnight Bourbon to clip heels and fall. Hot Rod Charlie was first past the post but disqualified for interference, elevating Mandaloun to the top spot.

Two months later, in the Grade 1 Pennsylvania Derby, those two hooked up again, with Hot Rod Charlie drifting out this time before inching away to finish a couple of lengths in front of his rival. That prompted the stewards to conduct an inquiry and jockey Ricardo Santana, aboard Midnight Bourbon, to object.  Unlike the Haskell, this time Hot Rod Charlie was not taken down. Trained by Doug O’ Neill and ridden by Flavien Prat, the winner paid $3.80.

Following a rash of fatalities in the spring, the dirt course at Laurel was completely rebuilt while the track remained closed for the summer. When it reopened things went smoothly — until they didn’t. Unfortunately, between November 6 and November 28 there was once again a cluster of equine fatalities forcing another closure, this time for two weeks while additional maintenance work was completed. On December 16, racing resumed at the track.

It was a big year for Flavien Prat in the Mid-Atlantic, as he won the biggest race in the region when he guided Rombauer to victory over nine other runners, including Kentucky Derby winner (maybe) Medina Spirit. The winner went off at odds of 11-1 in the 146th running of the race. Not even the Covid crowd restrictions and the controversy over Medina’s Spirit Kentucky Derby could fully dampen the return of the race to its traditional third Saturday in May spotlight.

Delaware Handicap day was somewhat dampened because of the passing of longtime paddock analyst Rich Glazier less than a month before the big race. Rich had been present as either a fan or employee for all but two of the last 50 DelCaps, and among his favorite stories was the tale of how he got a bet down on Politely in the 1968 DelCap – while stationed in Vietnam.