Chris Griffin called his first race as the announcer at Parx Racing on Monday, April 12, and the new East Coast racetrack voice didn’t miss a beat.

I asked him if he was nervous or uncomfortable or if he noticed any mistakes.

“I think you always get a little nervous when stepping into a new booth. Being nervous means you are focused on doing a good job,” Griffin said. “Being a pro is having those feelings, but when the mic is on… delivering the accurate race call you work at and prepare for. I may have had a word or two mixed up. I pronounced the winning owner’s name incorrectly but got it corrected right away.  But it’s a learning process, never stop learning. I was never uncomfortable as the team and management team here made me feel right at home.”

But his first announcing job was quite different. Griffin worked for the National Hot Rod Association (NHRA) for four years, where he traveled extensively. At one time, he traveled to thirty cities in thirty weeks, covering a different car racing event each weekend.

During his time with the NHRA, a unique opportunity presented itself and Griffin jumped at the challenge.

He answered an ad seeking an announcer for the Harlem Globetrotters and was accepted for yet another traveling job. Fortunately, his gig with the NHRA had already made him a proficient globetrotter.

During his employment with the Globetrotters, Chris caught the leg up he needed to get into horse racing.

He happened to be acquaintances with veteran track announcer Frank Mirahmadi, who signed him up as a guest handicapper at some seminars in Northern California. Chris impressed Frank, and the two crossed paths again in Arkansas when the Globetrotters were playing in Little Rock and Mirahmadi was calling races at Oaklawn.

Mirahmadi took in a ‘Trotters’ game and immediately knew Chris had talent.

Later that year, Mirahmadi suggested Griffin apply for the announcing job at Ferndale, a track on the California fair circuit, as he wouldn’t be able to announce that season.

Ferndale hired Griffin for a two-week tryout period, and the first race he called was a 200-yard mule contest.

He continued calling races at the various California fair meets and at several major tracks across the country.In the fall of 2018, he was named full-time announcer for Sam Houston Race Park, and now he’s at Parx.

Griffin has some awfully big shoes to fill at Parx. Longtime announcer Keith Jones retired in December after 34-years as the horse racing voice of Philadelphia.

“The toughest part of my debut at Parx was stepping into a booth manned by the legend Keith Jones,” Chris told me. “There’s no replacing him, but I can try to emulate his professionalism.”

I asked him what the major difference was between calling races at Parx and at a California fair venue like Ferndale.

“Ferndale and Parx are definitely different but the mechanics remain the same to call the race accurately,” he said.  “A smaller track like Ferndale, it seems like everything is happening pretty rapidly. At Parx, you have the time to set things up.”

Griffin added, “The vantage point from the booth is so much higher than I am used to. I really like the view and you can see everything from the booth. The stretch is longer than I’ve been used to as well. You can make a move, launch from the back and still have time.”

With his new view from the booth, Griffin will get to call two Grade 1 events, as well as a half-dozen other graded events this year at the Bensalem, PA racetrack.

Beyond being a racecaller, Griffin has a marketing background – and some thoughts on how racing might attract new fans while maintaining the support of the current fanbase. He thinks social media might be the answer.

“I think you can balance the loyal audience who has been coming to the track for fifty years with a new younger generation of fans,” Griffin said. “We communicate so much through our phones, it continues to be a great way to connect with a broad audience. Social media has taken on a much larger presence, and you can complete many tasks with a phone. My goal is to display the racing here at Parx in a professional manner every chance I get. There’s a very passionate sports fan base here in the area, and I believe we can grow that fan base with some time and effort at Parx.”

It’s been a whirlwind for Griffin, but he says it’s just where he wants to be.

“My first week was fantastic. Management and staff have welcomed me very graciously and this is just the start,” he said. “A couple of longtime bettors came by to say hello, wish me well and tell me some great track stories from the past. Parx is a terrific place, and I’m happy to be here.” 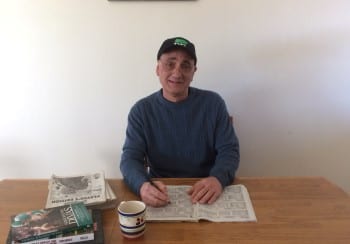 New York native Peter Monaco grew up near Belmont Park and Aqueduct and spent most of his adult years at the NY racetracks. He has made a living as a professional horseplayer and handicapper and now writes about the sport.