Ghosts of racetracks past: Always old-timers’ day at Commodore Downs 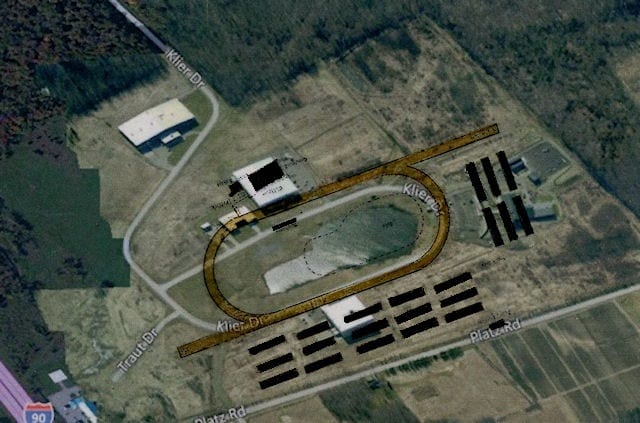 Commodore Downs didn’t have the pop and sizzle of a nighttime track like the Meadowlands, nor the beauty and grace of a Saratoga or Santa Anita. It was just a little utilitarian racetrack near Erie, Pa. where horsemen primarily from the Ohio and West Virginia circuits scratched out a living running for rock-bottom claiming prices and purses.

And it occupied perhaps the most unusual niche in all of racing. Despite its own short life, Commodore Downs, you see, became perhaps best known for the success enjoyed by some awfully long-lived horses.

Commodore didn’t have a long lifespan. It opened as a five-eighths oval for thoroughbred racing on May 1, 1973, with a horse named Tinic winning the first race. That inaugural year also featured the high-water mark for attendance and handle, when a crowd of 6,535 came through the turnstiles and bet $329,616 on October 6, numbers that would never be exceeded.

Beset by financial problems, Commodore lasted for only a decade. It was pronounced dead in 1983, but received an infusion of cash and was revived in 1984 as Lake Shore Meadows, featuring a harness program. The appetite for the clippity-clops wasn’t that robust, either, and Commodore turned off the lights in 1986.

Later that year, Commodore sprang back to life with a new name – Erie Downs – and a renewed resolve by management to make the business work. But the handwriting was on the wall, as the track was losing money again. Live racing ceased at the end of the 1987 season. The facility remained opened for simulcasting, however, until June 8, 1988, when it shut down for good. The abandoned grandstand and stable area lingered until 1999, when bulldozers finally sent the facility to racetrack heaven.

“It was a fun place,” said Glenn Brok, who owns Diamond B Farm in Mohrsville, Pa. with his wife, Becky, and who trained at Commodore. “It was nothing fancy, but it wasn’t bad. It was bottom-feeder racing, and we were running for $1,500 purses. They ran a summer meet under the lights, and they had decent crowds. The people were really into it, and it had a feel almost like when the circus comes to town.”

Brok first shipped a few horses from Penn National to Commodore in the mid-1970s, recalling the time he arrived with a horse named Becky’s Birthday. “I borrowed a slide bit from somebody and then I ended up beating them and winning the race,” said Brok. “The horse paid good money, too, it was a big payoff. Then I was cooling the horse out in the spit barn when the stewards called. When I got on the phone, one of them said, ‘The next time you come up here with a horse like that, you let us know beforehand.’” Brok had a string of horses stabled at Commodore in 1986 (when it was called Erie Downs), and he won three dozen races at the meet and was third-leading trainer. “I had a 30-foot travel trailer up there that I parked in a place near a creek, in a pretty rural area,” recalled Brok. “I was winning a lot of races, I picked up a couple of owners, and I was doing a lot of fishing – it was great.” 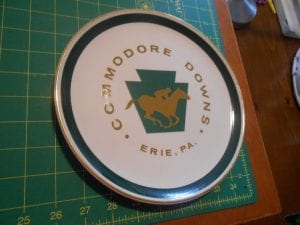 Aside from being known as a place for lower-level claimers, Commodore also had a reputation as hosting some of the oldest horses in training, most of whom were on their last legs, literally, but still found a way to win.

On August 13, 1976, a 16-year-old gelding named Stonehedge became the oldest winning horse in modern times when he recorded his 30th lifetime win under the Erie lights, coincidentally the last time he would ever prove victorious in a career that spanned 226 races. Two years later, at age 18, the old boy – famous for his strong finishing kick – would meet his Maker at Commodore when he did not finish a race on August 27, 1978.

In 1981, another oldie-but-goodie thrilled the Commodore faithful. Behavin Jerry, a spry 17-year-old gelding, eclipsed Stonehenge’s record and became the oldest horse to win at a pari-mutuel track when he won a $1,500 claiming race on September 7. He also became the third 17-year-old to win a race at the Erie oval since 1976.

Owned by Tony Brodzinski of Ohio and trained by Larry J. Henninger, ‘Jerry’ was a small horse, described as rather mean, who was forced to retire by Commodore Downs management two starts after that victory, due to concerns that he might have a heart attack on the track. The son of Ambehaving retired with an astonishing record of 307 starts, 38 wins, 25 seconds and 48 thirds, earning only $72,529 for his troubles.

All in all, Commodore Downs had a troubled, brief existence, even prompting such newspapers as the The New York Times to comment on some of its bad luck.

“How many times have you heard of a tote board’s being knocked out by lightning bolts?” The Times asked in its “Sports World Specials” column published June 11, 1979. “Well, it’s already happened twice at Commodore, a small thoroughbred racing plant near Erie, Pa. Beyond that, times have generally been tough, with the result that the track has rarely been able to turn a profit.”

The same column described another hard-luck incident at Commodore, when the company whose job it was to deliver money to the track had problems with the time lock on its vault, and informed track officials it would be impossible to bring them any cash for that night’s card.

Track president Tom Schuchert picked up the telephone and put out a call for help from nearby tracks, and made arrangements to borrow $60,000 from Thistledown, $60,000 from Penn National, and $30,000 in small bills from two local banks.

“I can’t believe all these people coming to our aid,” said Schuchert in The Times article. The day’s card went off without a hitch, with 2,455 bettors pushing $201,451 through the windows.