Swiss Skydiver, Pat On the Back, and more: The week in social media 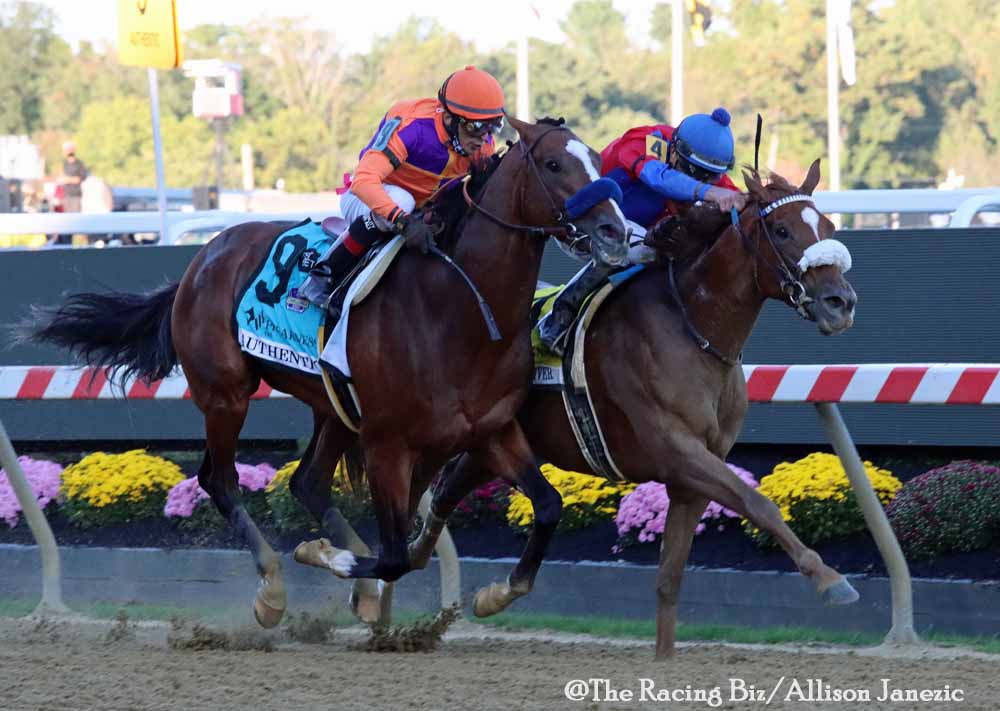 History was made in the Preakness Stakes over the weekend, the Fasig-Tipton Midlantic Fall Yearling Sale took place, and a new stallion prospect is making his way to Pennsylvania for 2021.

A filly in the Preakness!

A riveting running of the Preakness Stakes took place over the past weekend, in which the history of the race was rewritten in an epic battle of the sexes.

Swiss Skydiver, the lone filly in the race, entered the Preakness Stakes as somewhat of an underdog. She went to post with odds of 11-1. However, the chestnut filly was quick to show that she was better than her odds suggested, giving her male counterparts more than they could handle.

Post time favorite and Kentucky Derby winner Authentic raced near the pace for the majority of the 1 3/16-mile challenge, obtaining the lead around the five-furlong mark. Swiss Skydiver and jockey Robby Albarado were never far behind, and past the half-mile marker made a sudden move to challenge.

As the field barreled around the final bend it was the Kentucky Derby winner and the filly who found themselves leading the fray. The pair hooked up in the stretch in a gritty display of speed and will. The filly threw her head in front and kept it there, refusing to yield to Authentic no matter how hard he tried to pass. Swiss Skydiver and Authentic left the rest of the field behind, and Swiss Skydiver won by a neck in a blistering final time of 1:53.28, making it the second fastest running of the race in history.

Longshot, Jesus’ Team rolled up to complete the trifecta in third.

Bred by WinStar Farm, Swiss Skydiver is owned by Peter Callahan and is trained by Kenny McPeek. By Daredevil, the filly was a modest $35,000 purchase at the Keeneland September Yearling Sale back in 2018. To date, Swiss Skydiver has won six times in eleven lifetime starts and has banked earnings of $1,792,980. The filly is expected to make her next start in either the Breeders’ Cup Distaff on November 6 or the Breeders’ Cup Classic against the males on November 7.

The Fasig-Tipton Midlantic Fall Yearling Sale took place on October 5 and 6. This year’s edition of the sale saw a total of 379 yearlings find new homes, bringing a total of $9,161,200 through the sale.

The sale topper for day one of the sale was a chestnut colt by Cupid, out of the mare Gottah Penny. Sent through the ring as Hip 4, the yearling was consigned by Eaton Sales and was purchased by Xtreme Racing Stables LLC for a final bid of $160,000.

The overall sale topper was a Pennsylvania-bred colt by champion Gun Runner. Labeled as Hip 371, the chestnut colt is out of the mare Stormy Tak and was bred by Jon A. Marshall. Consigned by Becky Davis, Hip 371 commanded a final price of $270,000 with the winning bid going to Lambe Bloodstock.

Midlantic-breds drove the sale, with the two Maryland-breds following the PA-bred sale-topper. Figures were basically on point with the 2019 sale, with the average landing at $24,172 and the median reaching $14,000. The RNA rate was also identical to 2019, at 21%.

Pat On the Back comes to PA

Pennsylvania has gained a new stallion, as it was announced this week that Pat On the Back has been retired from racing and will enter stud at Godstone Farm, near Littlestown, Pa for 2021.

A six-year-old son of Congrats, Pat On the Back is a Grade 2-winning millionaire who has a total of nine wins to his credit from 30 starts. He has scored in numerous stakes events, with his most notable achievement coming in the form of he Grade 2 Kelso Handicap in 2019.

Bred in New York by Sugar Maple Farm, Pat On the Back was conditioned for the races by Jeremiah Englehart and was raced in partnership with Harold Lerner LLC, AWC Stables, and Nehoc Stables. Upon his retirement from the track, Pat On the Back had banked a total of $1,144,545 in earnings.

Pat On the Back comes from a strong line of winners and producers of winners, making him and interesting stallion prospect. Out of the Awesome Again mare, Accomplished, Pat On the Back is a half-brother to the stakes winning and stakes producing mare, Sarah Accomplished (by Performing Magic). The second dam of Pat On the Back, I’m in Celebration, has produced multiple stakes winners and is herself a half-sister to Flamingo Stakes (G3) winner First American, Indiana Derby winner Dubai Dust (a sire of 28 black-type winners), and Little Baby Bear, who is a Group 1 winner in Brazil.