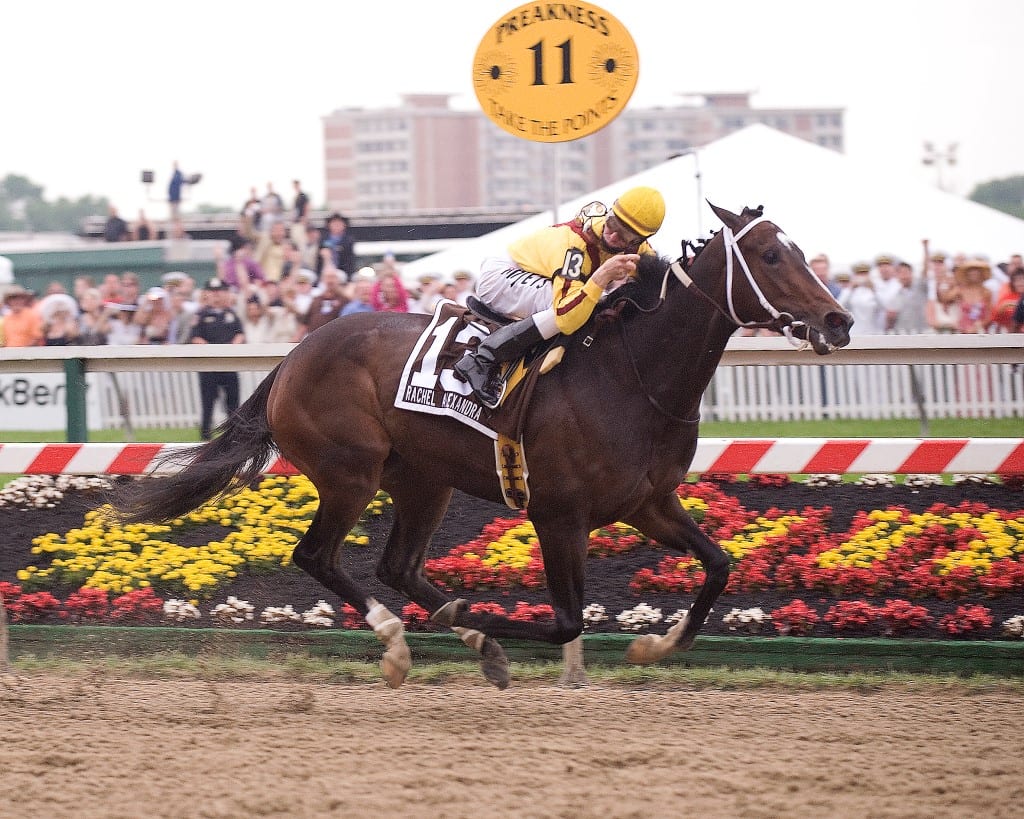 In American racing, males race with males and distaffers with distaffers, and for the most part, never the twain shall meet.

But in 2009 a super-filly obliterated that line, beating males three times in four months in Grade 1 races, a streak that began in the Preakness.

Her story began January 26, 2006 when a mare named Lotta Kim gave birth to a strong bay filly by Medaglia d’Oro. Stamped with an upside-down exclamation point on her head, the filly was bred and owned by Dolphus Morrison, who named her Rachel Alexandra in honor of his granddaughter.

Nobody could have guessed what was to come when Rachel Alexandra made her debut in 2008. She finished sixth in her first try for trainer Hal Wiggins. However, the striking filly figured things out in her next start and made her way to the winner’s circle. Rachel Alexandra raced four more times at the age of two, finishing second twice and first twice, including a nearly-five length score in the Grade 2 Golden Rod Stakes at Churchill Downs.

Rachel Alexandra was a quality athlete at the age of two, but when she returned to the races as a three-year-old, she was a completely different horse.

Rachel Alexandra demolished her competition in the Martha Washington Stakes, Fair Grounds Oaks (G2), and Fantasy Stakes (G2). Yet, as impressive as she had been, Rachel Alexandra was only just getting started.

On the first Friday in May, Rachel Alexandra raced for the cape of lilies in the Kentucky Oaks (G1). As the field neared the top of the stretch, jockey Calvin Borel gave Rachel Alexandra the cue to go, and she really went.

Extending her long, graceful stride overtook Gabby’s Golden Gal and hightailed it for home. Stride by stride Rachel Alexandra was separating herself from the rest of the field as Borel sat completely motionless on her back, letting her do her thing, and announcer Tom Durkin called out, “She’s going to DESTROY this field! Oh! Super filly? You bet!”

Rachel Alexandra scorched over the wire ahead by an astonishing 20 ¼ lengths, the largest margin of victory that the Kentucky Oaks had ever seen. That caught the attention of Jess Jackson, owner of Stonestreet Stables, and Harold T. McCormick. They purchased the filly from her original connections, placed her in the care of trainer Steve Asmussen — and eyeballed bigger game.

Her new connections decided that she would dive into deeper water and compete against the boys. They decided to spend $100,000 to supplement the filly into the Preakness Stakes, which led to its own kind of drama, as Derby winner Mine That Bird’s co-owner Mark Allan and Derby runner-up Pioneerof the Nile’s owner Ahmed Zayat flirted with a scheme to enter other Triple Crown-nominated horses, which under the rules received preference, in order to freeze out the filly.

They backed off that plan, and the 2009 Preakness Stakes had plenty of intrigue. One day after Calvin Borel flew to glory in the Kentucky Oaks aboard his super filly, he won the Kentucky Derby on 50-1 longshot Mine That Bird. However, with both horses entered in the middle jewel of the Triple Crown, Borel had an important decision to make. He gave up his mount on the Derby winner, walking away from any chance of a Triple Crown sweep, to ride the filly in the Preakness Stakes. It was a decision that proved to be perfect.

Only four fillies had etched their name into Preakness lore in the 134-year running of the event, the last before Rachel Alexandra having been Nellie Morse in 1924.

So perhaps history wasn’t in Rachel Alexandra’s favor, but the present — the Keystone Kops machinations to keep her out of the race, the breathtaking ease with which she had dispatched the field in the Oaks — sure seemed to be, and the betting public sent her postward as the 9-5 choice.

The field assembled beneath the gray Maryland sky, with Big Drama causing a slight delay in the gate.

When the gates opened, Rachel Alexandra hustled out and made a beeline for the front. Breaking from post 13, the filly didn’t have time to waste, as the wide post came with the risk of losing ground. She quickly had company, though, in the form Big Drama, who hadn’t run since late March.

Rachel Alexandra and Big Drama pushed through rapid fractions of :23.13 for the opening quarter ,:46.71 for the first half mile, and 1:11.01 for six furlongs. Big Drama fell away thereafter — he finished fifth — and Rachel Alexandra turned for home with a clear lead.

But Borel knew that the battle was not over. Mine That Bird was steadily making his way toward the front, and the time was coming to find out if he had picked the right horse to ride.
Mine That Bird came tearing into the stretch, chopping into the filly’s advantage. Digging in, Rachel Alexandra pressed on, valiantly fending off the late charge of Mine That Bird. In a display of heart and will power, Rachel Alexandra galloped over the finish line clear by one convincing length.

“I thought I had a shot at the three pole,” Mike Smith, aboard Mine That Bird, said. “I thought, if that filly melts a little bit, I’ll catch her.”

But she didn’t, stopping the timer in 1:55.08, and history was made. Rachel Alexandra now stood as only the fifth filly to claim the Black-eyed Susans, the first horse of either gender to score from post 13, and the only Kentucky Oaks winner to take down the Preakness.

After the race, Borel stated that his filly was not handling the track well, making her feat all the more impressive. “She was struggling at the end,” Borel said. “She struggled a lot (with the track). She was pricking her ears and I had to get after her. I knew Mine That Bird was coming. It’s going to take a racehorse to beat her. She’s the greatest racehorse I’ve been on in my life.”

Rachel Alexandra remained untouchable through the rest of her three-year-old season. She posted three more wins in 2009, all of which took place in Grade 1 events. She broke Ruffian’s Mother Goose Stakes record, zipping the nine furlongs in 1:46.33 en route to a 19-length triumph. Rachel Alexandra then took down the males in the Haskell Invitational, romping in the slop to score by six overwhelming lengths.

Rachel Alexandra completed her stellar season by besting older males in the Grade 1 Woodward, and her body of work earned her the titles of Champion Three-Year-Old Filly and Horse of the Year.in a year in which the Horse of the Year’s other would-be claimant also was a distaff runner, the fabulous mare Zenyatta.

Rachel Alexandra returned to the races as a four-year-old, and though she was terrific by most normal standards, it was clear the spark that had made her so spectacular as a sophomore was missing. She was retired after a disappointing second-place finish in the Grade 1 Personal Ensign, won by 21-1 outsider Persistently.

With 13 wins from 19 starts and multiple records along the way, Rachel Alexandra had more than left her mark on the sport. After banking earnings of over $3.5 million, her storybook adventure was ready to reach a new chapter. Rachel Alexandra was retired to Stonestreet Farm to start a new life as a broodmare.

Rachel Alexandra gave birth to a strapping colt by two-time Horse of the Year and 2007 Preakness winner, Curlin, who had been owned by Stonestreet during his career on the track. One year later, the magnificent mare gave birth to a Bernardini filly. However, complications due to the delivery resulted in her owners making the responsible decision not to breed her again.

Rachel Alexandra was inducted into racing’s Hall of Fame in 2016 and now lives out her peaceful days at Stonestreet Farm.