Preakness Memories: Spectacular Bid, greatest to look through a bridle 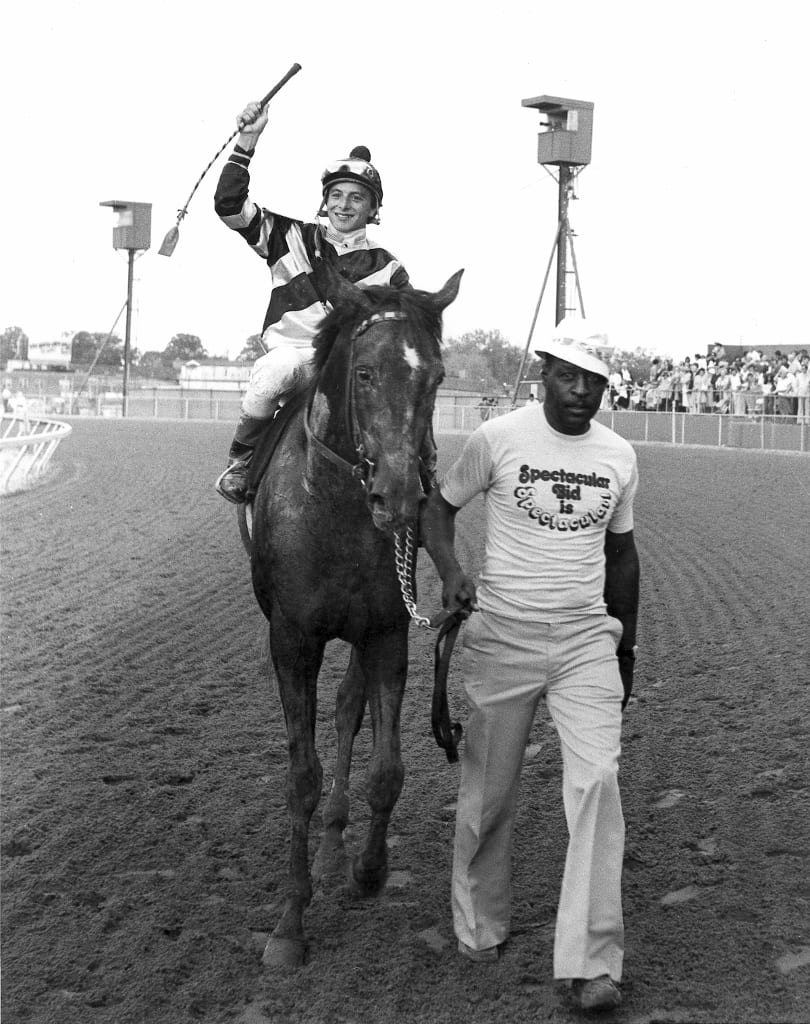 Our 2019 Preakness Memories will feature stories of eight editions of the Preakness from the last 40 years. Today, 1979 and Spectacular Bid, the greatest racehorse to look through a bridle.

On February 17, 1976 a strong, gray colt was born at Buck Pond Farm near Lexington, Kentucky. The steel-colored foal was by Bold Bidder and was out of the Promised Land mare Spectacular. The colt was later purchased by Harry Meyerhoff’s Hawksworth Farm at the Keeneland September Yearling Sale for the modest price of $37,000, and was placed in the care of trainer Grover “Bud” Delp.

From such beginnings came Spectacular Bid, a horse so good that his trainer dubbed him “the greatest racehorse ever to look through a bridle.”

Spectacular Bid began his career in Maryland at the age of two, posting a 3 ¼ length win at Pimlico Racecourse. He claimed victory once again at Old Hilltop one month later, but tasted defeat for the first time in his third attempt in the Tyro Stakes. The gray youngster fell victim to a rough trip over the wet Monmouth track that day and could do no better than fourth.

Spectacular Bid made his next start in the Dover Stakes at Delaware Park, where he finished a solid second. However, the colt emerged from defeat with a vengeance, refusing to finish behind anyone for the rest of his two-year-old season. Spectacular Bid racked up victories in the World’s Playground Stakes (G3), Champagne Stakes (G1), Young America Stakes, and Laurel Futurity (G1), before closing out his 1978 season with a decisive score in the Grade 2 Heritage Stakes. Spectacular Bid’s impressive exploits on the track were enough to earn him the coveted title of Champion Two-Year-Old Male.

Spectacular Bid kicked off his three-year-old season the same way he had left off: winning. He took down his rivals in the Hutcheson Stakes, Fountain of Youth Stakes (G3), Florida Derby (G1), Flamingo Stakes (G1), and Bluegrass Stakes (G1) before making his way to Louisville to run for the roses. 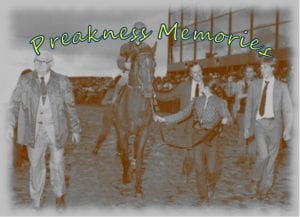 As expected, Spectacular Bid waltzed to triumph in the Kentucky Derby as the 3-5 favorite. His 2 ¾-length victory in the Derby was enough to scare away most of the competition, as only four rivals challenged Spectacular Bid in the Preakness Stakes.

With his nineteen-year-old regular rider Ronnie Franklin, a Baltimore native, in the saddle, Spectacular Bid went postward as the 1-9 favorite in the Preakness Stakes. A crowd of over 72,000 gathered at the track to bear witness to the Kentucky Derby hero, who was expected not only to win but also to romp.

When the gates opened, the compact field took flight with Spectacular Bid confidently hanging back in fourth early. Content to let his foes set the pace, Spectacular Bid cruised around the very track where his career began. It wasn’t until the field hit the backstretch when Spectacular Bid took command, unraveling his hulking stride and blasting past his competition. With blistering speed and uncanny ease, The Bid soared to victory by 5 ½ lengths, stopping the clock in 1:54.20 for the 1 3/16-mile event.

The stage was set for Spectacular Bid to join to become the third consecutive Triple Crown winner and fourth in six years. He appeared unbeatable in the weeks leading up to the Belmont Stakes, but fate would have other plans. Instead of watching Spectacular Bid conquer the Triple Crown, fans watched in disbelief and horror as the seemingly invincible champion staggered home to finish third behind Coastal and Golden Act.

What beat Spectacular Bid in the Belmont?

One answer may be the safety pin that he stepped on the morning of the race. The pin went straight into his hoof, and Delp considered scratching before being satisfied with the Bid’s soundness prior to the race.

Another may be the anxious ride Franklin gave him, contesting 85-1 Gallant’s Best’s early pace of 47 ⅗ for the opening half-mile, before going clear after three-quarters in 1:11 ⅕. Franklin’s ride was the culprit Delp most often pointed to.

Spectacular Bid bounced back to form after his stunning defeat in the Belmont Stakes. The gifted runner went on to collect 26 victories from 30 starts, setting or equaling a track record in eight separate triumphs, and collecting earnings of $2,781,608 along the way. He went on to be named Champion Three-Year-Old of 1979, the Champion Older Male and Horse of the Year in 1980 and was inducted into the Hall of Fame in 1982.

Spectacular Bid went on to a career at stud at Claiborne Farm upon his retirement and would later pass away on June 9, 2003 at the old age of 27.

Delp — one of Maryland’s “Big Four” trainers in those halcyon days — joined Spectacular Bid in the Hall of Fame in 2002. He died in 2006; in 2015, King T. Leatherbury, another member of the Big Four, took his place in the Hall of Fame, as well. Harry Meyerhoff, the owner, passed away in 2016.

How great was Spectacular Bid? Delp proclaimed in an interview with the Los Angeles Times, “Of the horses I’m familiar with, only Citation and Secretariat would have run with the Bid.’”