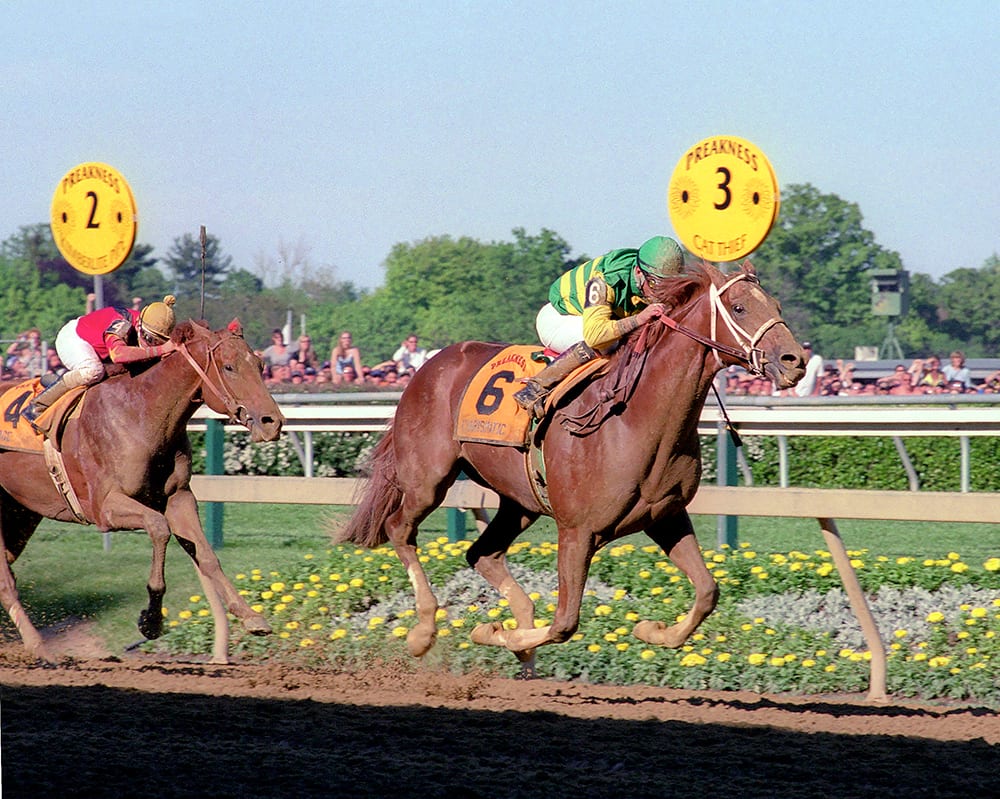 Perhaps no horse’s foiled bid for the Triple Crown contained quite as much drama as did Charismatic’s. In the space of five weeks, the D. Wayne Lukas trainee went from ignored outsider to America’s darling to near-tragic hero.

Born March 13, 1996 Charismatic was a chestnut colt with splashes of ivory. By 1990 Preakness Stakes winner Summer Squall, Charismatic was out of the Drone mare Bali Babe. Owners Robert and Beverly Lewis placed him in the care of Hall of Fame trainer, D. Wayne Lukas.

The start to Charismatic’s career did not hint as to what was to come. In fact, it took the youngster six attempts and a drop into claiming company to break his maiden as a two-year-old

The struggles continued at three. Defeats in allowance company and a fifth-place finish in the Grade 2 Santa Catalina Stakes led Lukas to drop him down into claiming company once again.

The drop in class proved successful, and Charismatic cruised to victory for the second time in his career. A solid second in his next start gave his connections the confidence to move forward, and Charismatic was then entered in the El Camino Real Derby (G3). The colt put forth an admirable effort to finish second, finding himself on the Kentucky Derby trail.

In the Grade 1 Santa Anita Derby, though, Charismatic could only manage a fourth-place finish. Lukas decided to take one more shot with Charismatic, entering him in the Grade 2 Lexingon Stakes at Keeneland. There, Charismatic scored a decisive upset at 12-1 odds to earn a spot in Louisville.

Despite his convincing win in the Lexington Stakes, Charismatic entered the 1999 Kentucky Derby as a 31-1 underdog.

The field took flight in the Kentucky Derby, with Valhol setting the early pace. Charismatic raced mid-pack while not far back, biding his time. Nearing the quarter pole, jockey Chris Antley gave Charismatic the command to run. And how he ran; Charismatic, seventh after three-quarters of a mile, surged to win the Derby by a neck.

Two weeks later, Charismatic found himself in the starting gate at Pimlico, seeking to keep the hope for a Triple Crown sweep alive. It was a place that neither Charismatic nor his rider seemed likely to end up. Just as Charismatic had to climb his way to the top from a humble start in claiming races, Antley had also risen from the bottom. In the past, the 33-year-old rider had struggled with drugs, depression, and weight-related issues. He had walked away from racing in 1997. But he had pressed through the hard times to find himself back at the pinnacle of his profession.

Neither the Derby victory nor the feel-good story mattered much to bettors, though. Charismatic broke from the Preakness starting gate in the Preakness as an 8-1 longshot.

A record announced crowd of 100,311 watched as Charismatic settled toward the back of the pack as the race unfolded. On the turn for home, Charismatic revved up a run while five-wide.

When the field hit the turn for home, Charismatic turned it on. Charismatic blew past one rival after the other, thundering over the ground until he found himself once again on the cusp of victory. He rolled into the stretch in charge, never looking back as he waltzed toward the wire. Menifee, the 2-1 favorite, ran on late but was never a threat.

While some of the fans were surprised to see the inspiring underdog once again in the winner’s circle, Charismatic’s rider was not among them.

“Wayne and I spoke this morning,” Antley said after the race. “The race set up pretty much like we expected. Everything went well; he ran a superb race.”

Lukas was also not surprised by his colt’s effort.

“I told Chris, ‘This is as good as human hands can make him. Let’s take advantage of every step,’” the Hall of Famer said.

On June 5, Charismatic raced before a record crowd of 85,818 in the Belmont Stakes. It was the last bridge that the colt needed to cross in order to become the first Triple Crown winner in 21 years, but it was a bridge too far; he would finish third as the 29-1 longshot Lemon Drop Kid stole the show.

In a dramatic turn of events, Charismatic’s bid for the Triple Crown was not the only thing that came to an end when he crossed the finish line at Belmont Park. Fans watched in horror and confusion as Antley pulled up his horse and hurriedly dismounted. Antley acted fast, cradling Charismatic’s left front leg as tears fell from his eyes.

”He was running comfortably turning for home. At about the eighth pole, he let up a little bit,” Antley explained after the race. “Then the horse from the outside, Lemon Drop Kid, came to us and passed us. I had stopped whipping. Heading for the finish, he suddenly dipped underneath me, and I could tell he was in pain. He gave us everything he had and ran as hard as he could. But he is an athlete, and he ran hard through the pain.”

Charismatic retired to Lane’s End Farm where he stood from 2000 to 2002. He was then sent to JBBA’s Shizunai Stallion Station in Japan until he retired from the breeding shed in 2016. In the fall of that same year, Charismatic was brought back to the United States so that he could retire to a life of luxury at Old Friends Equine near Lexington, Kentucky.

Charismatic’s return to Kentucky was short lived, as the 1999 Horse of the Year and Three-Year-Old Champion took his last breath on February 19, 2017. Charismatic had somehow fractured his pelvis, which resulted in severe bleeding that led to his death.

Another victim of an untimely demise was Charismatic’s partner, Chris Antley. He passed away from an accidental overdose on December 2, 2000.

While Charismatic and his rider are gone, they remain, in memory, two underdogs who refused to accept that the odds were against them.