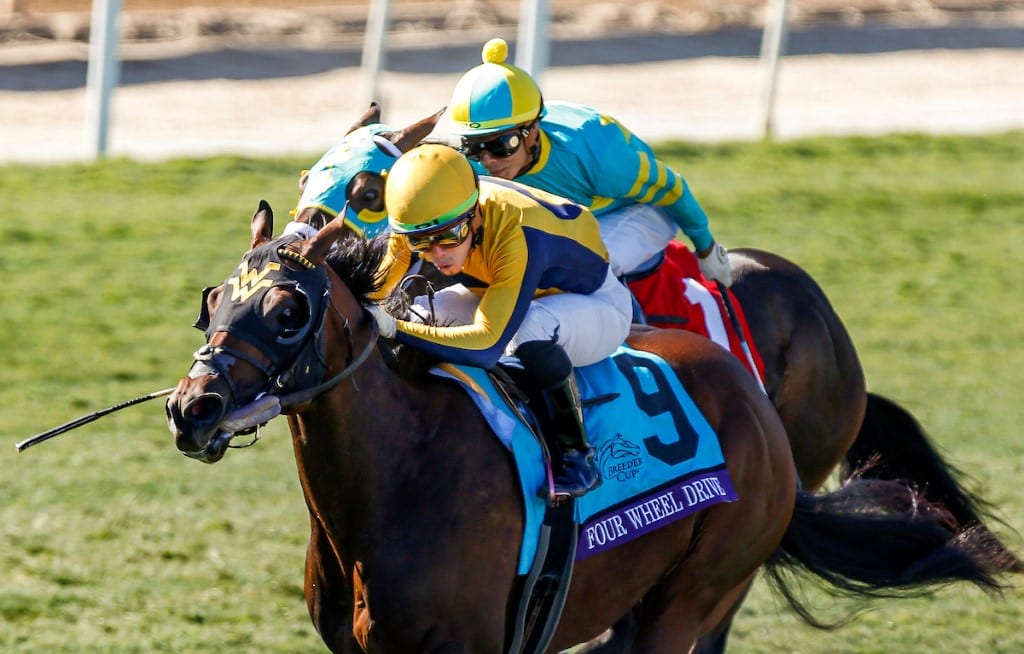 That proved prescient, as the Maryland-bred Sharing Friday became the second runner of the day who won a mid-Atlantic prep race to score in a Breeders’ Cup event. Sharing won the Selima Stakes at Laurel Park in September, while Four Wheel Drive, who won the Juvenile Turf Sprint earlier in the day, won his career debut in the Rosie’s Stakes at Colonial Downs in August.

“It’s so hard to win these races,” said Motion after Sharing’s victory. “Just to get here, it’s really surreal to be honest.”

With Manny Franco up — the same duo which had prevailed in the Selima — Sharing was able to bide her time behind the early speed before cruising up three wide in the lane to win by over a length in 1:34.59 for a mile on firm turf. Her time was faster than the 1:35.11 that it took the colt Structor to win the Juvenile Turf.

Sharing is a daughter of Speightstown out of another Breeders’ Cup winner, the 2019 Filly and Mare Turf champion Shared Account. She was bred in Maryland by Sagamore Farm and was a $350,000 auction purchase by Eclipse Thoroughbred Partners, which owns her in partnership with Gainesway Stable.

While it took Sharing all of three races to win a stake — she broke her maiden in her second start — the Wesley Ward-trained Four Wheel Drive dispensed with all of the preliminaries, debuting with a decisve win in the Rosie’s Stakes during the first meeting of the new Colonial Downs.

“We’re proud of this horse. He’s never started before,” Mike Hall, of owner Breeze Easy LLC, said after that impressive debut. “He’s had a couple good works. We’ve been slow getting him to the races. We hoped the horse would win here today and he actually did. We had plans for him starting a little earlier, but it never happened.”

The late start proved no issue on Friday. Four Wheel Drive, a son of American Pharoah, shot to the lead immediately and never looked back en route to winning the five-furlong dash in 55.66 seconds.

“I got a good trip,” said winning rider Irad Ortiz, Jr. “He broke good and put me on the lead. He was relaxed, and turning for home, when I asked him, he responded. He ran really well. He’s a nice horse.”

“He is a real cool dude,” added trainer Ward of Four Wheel Drive. “He takes it all in. He popped right out like a real professional horse will and he kind of settled. When (Ortiz, Jr.) called upon him, away he went.”

For both Laurel and Colonial, the Breeders’ Cup winners represent something of a feather in the cap. For Colonial, to have a runner debut there and go on to make a national splash helps to continue the momentum for a track that returned from a six-year hiatus this past summer.

And at Laurel, the Selima and Laurel Futurity were lengthened from sprint races to routes and the purses bolstered in hopes of playing a more prominent role nationally.