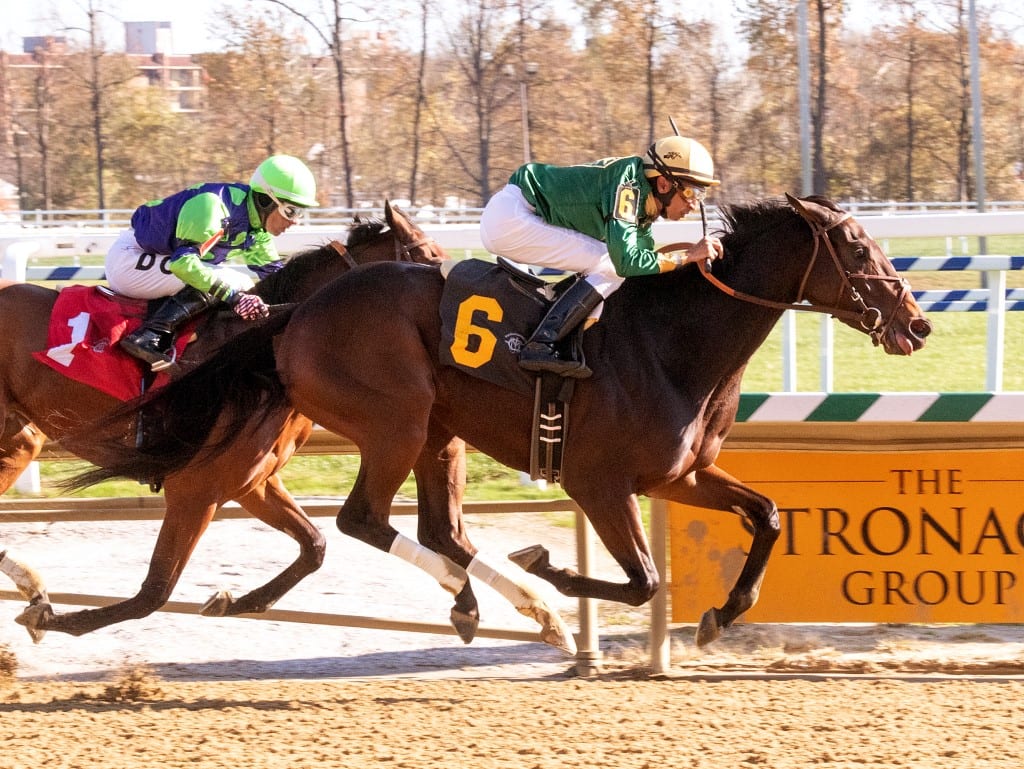 It was the sternest test she’d faced, and it yielded the closest finish she’d yet experienced.

But Arrifana passed yet another test with flying colors this afternoon at Laurel Park with a win in a $55,000 allowance contest.

That means, trainer Kelly Rubley said afterwards, that the connections will start hunting something “a little bit bigger” than allowance company for Arrifana’s next start.

Arrifana, a three-year-old filly by Curlin, faced the toughest field she’d seen while also trying two turns for the first time. Neither deterred her, as she wore down early leader Tweeting to win by a half-length in 1:43.72 for 1 1/16 miles on a fast main track.

Bred by Gunpowder Farms LLC, which owns her in partnership with Millennium Farms, Gainesway Stable, and LNJ Foxwoods, Arrifana ran her record to four-for-four with today’s victory. None of her prior wins had been by less than two lengths.

“I thought this was a great spot to try the two turns, and it worked out well,” said Rubley, who said that she thought Arrifana would stretch out further.

Certainly, her breeding would suggest that: she’s out of the A. P. Indy mare Vaulcluse, who retired undefeated in three starts with a stakes win.

“Since she showed up as a two-year-old, she’s always been very classy,” said Rubley. “You could tell she was a lovely filly.”

She didn’t debut until this August, as a three-year-old, but she quickly made up for lost time, winning her initial race by 10 lengths while ridden out.

That win was impressive enough that Rubley took the filly up to Saratoga for her next start, in a $92,000 allowance race. She won that by a couple and then returned to win a second-level allowance at Laurel by five lengths as the 1-9 favorite. She went off at 1-5 today.

All four of her victories — including the one in Saratoga — have come with journeyman jockey Julian Pimentel in the irons.

“I think he’d follow her about everywhere,” Rubley said.

For Rubley, meanwhile, the late-blooming Arrifana continues what’s been a banner year. Early in the season, Alwaysmining ran off a string of victories en route to carrying Maryland’s hopes into the Preakness. Later, Divisidero won the Grade 3 Red Bank Stakes at Monmouth Park to give the trainer her second career graded victory.

Then came Iowa Derby winner Top Line Growth and Arrifana, and now Alwaysmining is back on the work tab after a freshening.

“it’s been a great year,” Rubley said. “Hopefully, we can finish up as strong as we started.”