Filly Boundtobebad looks to be good in WV Futurity 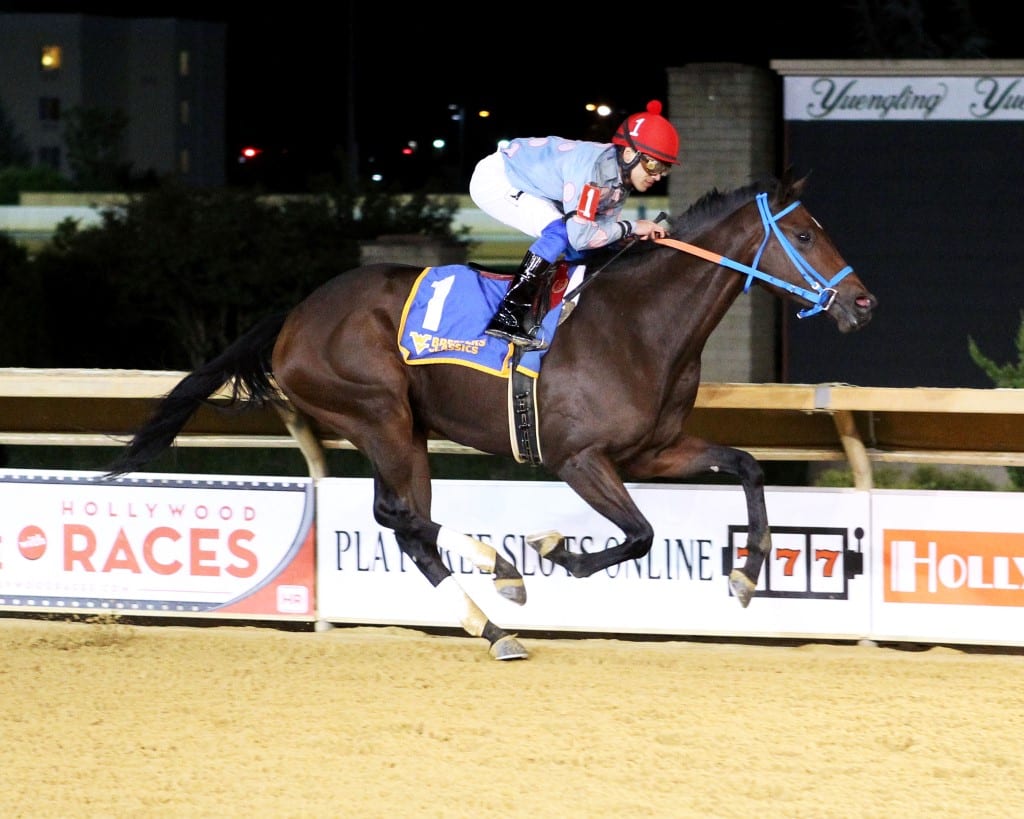 Saturday’s $50,000 West Virginia Futurity for West Virginia-bred two-year-olds at Charles Town Races presents an unusual scenario. Half of the runners — including the morning line favorite — are fillies who competed in the West Virginia Triple Crown Nutrition Breeders’ Classic three weeks back.

And half are colts and geldings who broke their maidens last time out. None of the runners from the boys’ version of the Triple Crown Nutrition, the Vincent Moscarelli Memorial, is entered.

The morning line favorite is the James W. Casey-trained filly Boundtobebad, who romped a 7 1/2-length triumph in the West Virginia Triple Crown Nutrition Breeders’ Classic at odds of 11-1.

The Windsor Castle filly won’t be anything like 11-1 in Saturday evening’s West Virginia Futurity, however, She’s been lined as the 2-1 morning line favorite.

A homebred for Casey’s Taylor Mountain Farm, Boundtobebad, out of the Boundary mare Bound To, won at first asking going 4 1/2 furlongs back in June, rallying from off the pace to be clear late. But it was at the two-turn, 6 1/2-furlong distance of the Triple Crown Nutrition that she excelled, romping home well clear after leading throughout.

Christian Hiraldo will once again have the mount.

And perhaps her presence here is why the boys have passed on the race. Her winning time of 1:20.35 was more than a second faster than Hypothesis — who is not eligible to the Futurity — managed it in the Moscarelli.

Boundtobebad will have to contend with two runners she bested last time out. Another Casey trainee, Candyforacause, was the runner-up that day and is back for another bite at the apple. The Charitable Man filly is 5-2 on the morning line, has a win from three starts, and will once again have Sunday Diaz, Jr. in the irons.

Also back in is Virginia Peach (8-1). The Ollie Figgins-trained daughter of Swiss Yodeler was fifth in the WVBC event and, beyond her maiden score, achieved her best result when second in the Rachel’s Turn Stakes in September. Luis Batista will ride.

Each of the three boys in the race broke his maiden last time out. Derek’s Boy (9-2) and Henry Standingbear (4-1) both did so at first asking. The former, trained by Cal Lynch, will have Xavier Perez in the irons, while Carlos Delgado will ride the latter for trainer Tim Grams.

Meanwhile, it took Ocasionaly Classy (6-1) five tries to graduate, which he did two weeks ago for trainer John A. Casey. Darius Thorpe will ride.

The Futurity is carded as the seventh race on a nine-race card, and post time is 10:02 p.m.