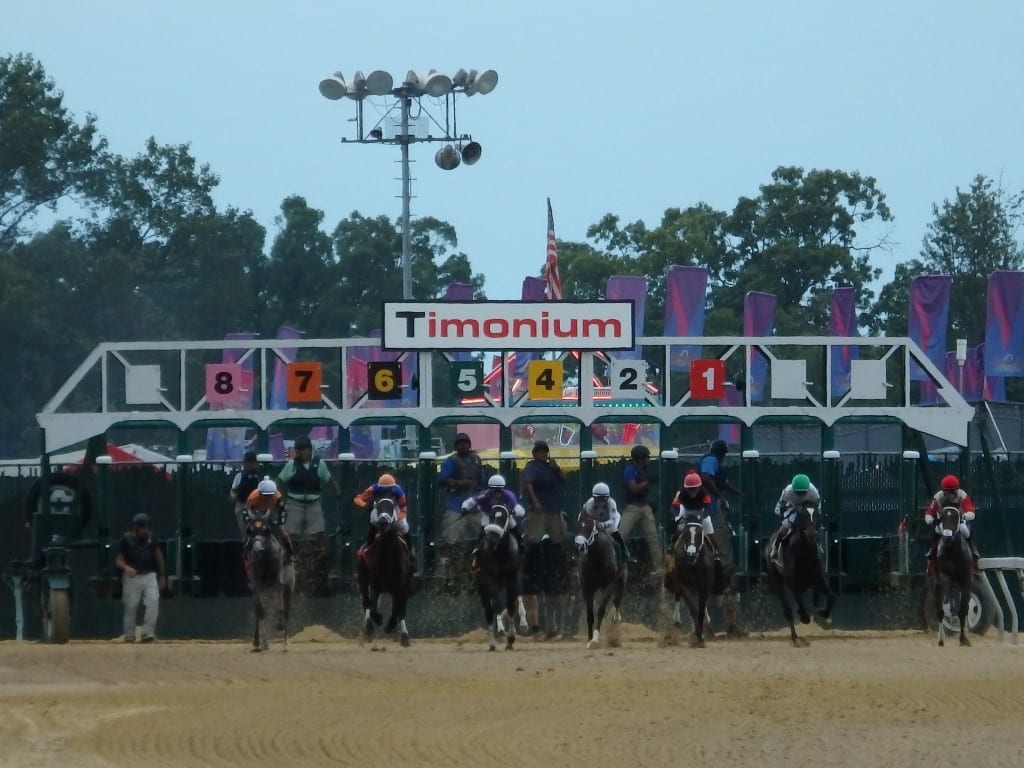 Timonium. Photo by The Racing Biz.

After a rainy start to the meet, the seven-day Maryland State Fair race meeting had nothing but blue skies and perfect weather the rest of the way.

The riding title went right down – literally – to the final race. When Shackforlove scored in Monday’s nightcap, the win gave jockey Kevin Gomez his seventh of the meet, snapping a tie with Xavier Perez and Ashley Castrenze. Gomez won five times during the meet’s second weekend, including three on Monday, to leapfrog his rivals.

Trainer Anthony Farrior was second in earnings and led all trainers with seven victories – one more than Hugh McMahon, and he led the meet’s point system, which awards trainers points for starting and for good finishes. Farrior had 105 points to McMahon’s 85. As the leading money earner, Robb was ineligible for the points crown.

Three horses – more than in either of the two prior years – won twice during the short meet. Farrior’s He’s Meant to Be, Lori Testerman’s Dat Dares Gold, and Cal Lynch’s Giggling all went two-for-two.

Both Giggling and He’s Meant to Be entered the meet as maidens and left with maiden and allowance wins under their belts.

NO GUTS, NO GLORY

The leading owner at the meet was the partnership of No Guts No Glory Farm and Marisa Gino, which made five starts and saw all five finish in the money. That number included Always Talking, who won a maiden claiming race on September 1, and Dreaming of Love, who finished second twice.

Remarkably enough, the earnings runner-up among owners was No Guts No Glory Farm all by itself, which sent out three runners, including Timonium Distaff winner Anna’s Bandit.

For the second straight year, the Big T hosted two stakes during the meet. On August 24, racing fans saw Clubman dominate his rivals en route to a nine-length win in the $75,000 Maryland Coalition Stakes at 9-10 odds.

One week later, it was Anna’s Bandit rallying late to win the Timonium Distaff by a length for her 12th win in 28 career starts.