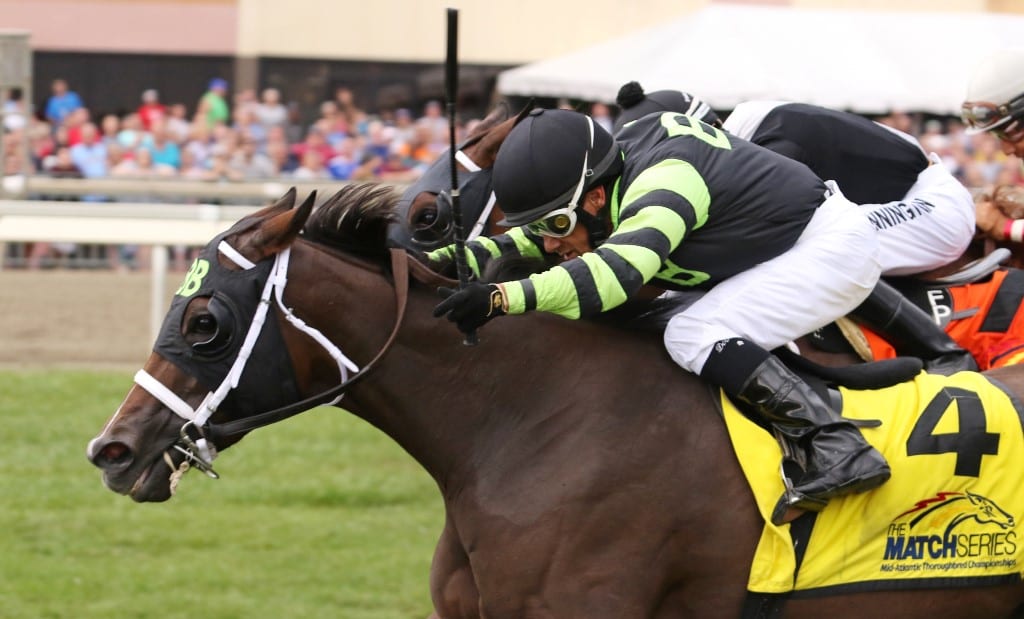 Dynatail and Chris DeCarlo narrowly took the Sal DeBunda PTHA President’s Cup at Parx Racing, part of the MATCH Series. Photo by Bill Denver, EQUI-PHOTO. Abiding Star and Dynatail established themselves as the leaders in two divisions while Ms Locust Point and Laki maintained their divisional leads in the MATCH Series, whose four stakes helped Parx Racing show phenomenal growth in total pari-mutuel handle Labor Day, Sept 2, compared with the same day in 2018. Parx reported total wagering on 12 races—seven of them stakes—of $4,034,945, up 160% from $1,551,880 for 10 races, two of them stakes, last year. The four $100,000 MATCH Series stakes served as the lead-in to a pair of Grade III stakes, the Smarty Jones and Turf Monster, and a new stakes, the Cathryn Sophia. The 2019 MATCH Series has been linked with big-event days at partner tracks for it first four of five legs. When Monmouth Park hosts the championship leg Sept. 28, the four series stakes will be the focal point. Here’s a look at the action at Parx and how it set the stage for the finals at Monmouth:

The showdown between division and overall series leader Ms Locust Point, owned by Jim Reichenberg and Cash is King, and two-time series winner Bronx Beauty, owned by 2W Racing, was upstaged by Chalon, who accelerated under Paco Lopez when she found room in the lane and drew away to win the six-furlong test by 1 ¼ lengths in 1:11.90 on a track rated fast.

Longshot Mess’n Around, owned by Mason Dixon Stable, rallied strongly to pass Bronx Beauty for second, while Danny Chen’s Yorkiepoo Princess was fourth by a neck over Ms Locust Point, who forced the early pace while three-wide.

With her fourth series start, however, Ms Locust Point picked up 5 bonus points to go along with another 2 for her finish position. That gives her 31 points atop her division and also the overall MATCH Series thus far.

“It’s good money,” Cash is King’s Chuck Zacney said of the reason the 5-year-old mare trained by John Servis has stuck with the series. “And she always give 100% out there.”

Bronx Beauty picked up 5 points and now has 25. Trainer Anthony Margotta Jr. said he was going through the various scenarios that could unfold should the top two meet at Monmouth, which appears the plan. He said the series is good for competition, and indicated it doesn’t hurt that Bronx Beauty is based at Monmouth.

Steve and Debbie Jackson’s Last True Love, who hasn’t missed a MATCH dance this year, picked up 5 bonus points plus another for her sixth-place finish. She now has 12 points, good for third in the standings. Yorkiepoo Princess qualified for a chance at bonus money and now has 7 points.

As for Lael Stable’s Chalon, she is now two-for-two in MATCH competition, with a win last year at Monmouth that set her up for two near-misses in a Grade II stakes at Keeneland and in the Grade I Breeders’ Cup Filly and Mare Sprint. Trainer Arnaud Delacour said those two races are the target again this year.

“We had (the Roamin Rachel) in mind for her—it’s 33 days before the Thoroughbred Club of America, and then there’s the Breeders’ Cup. The timing was perfect. We’re trying so hard to get the (graded stakes win) that she deserves.”

Trainer Edward Allard had entered Stonehedge LLC’s Abiding Star in the Grade III Red Bank Stakes at Monmouth Sept. 1, but opted for the 7 ½-furlong Neshaminy. The move paid off as Abiding Star took command early under Carol Cedeno and held off Matthew Schera and Jeffrey Pesot’s Paret in a stretch-long duel to prevail by a neck in 1:29.56 on a course rated firm.

Abiding Star and Paret finished second and third, respectively, separated by a neck, in the 7 ½-furlong Glasgow Stakes at Delaware Park. The winner was Parlor, who did not compete in the Neshaminy.

Abiding Star now has 17 points, two more than division leader Completed Pass, who didn’t race at Parx but has three series starts and thus qualifies for bonus money. Abiding Star and Paret, with 12 points, each need one more start to qualify. The Rainbow Heir Stakes, the final race of the division, is at 5 ½ furlongs, but both horses have competed in one-turf turf sprints.

“I liked his chances here today,” Allard said. “I’ve had horses for Stonehedge for many years—they’re great owners and they’ve given me great horses. He has gone short before, and (given the win today) we might have to take a look at Monmouth.”

Meanwhile, Patricia Generazio’s 8-year-old Pure Sensation, who won the Pennsylvania Governor’s Cup at Hollywood Casino at Penn National Race Course in his only MATCH division start this year, won the Grade III Turf Monster Stakes later on the Parx card for the fourth time in his career.

Trainer Steve Asmussen has a history of shipping to the Mid-Atlantic region and doing well in the MATCH Series, and it played out again when Woodford Racing’s Engage, fourth in his first start of the year in July at Saratoga Race Course, rallied from just off the pace under Joe Bravo to win the six-furlong event by a half-length over Bon Rasion in 1:11.48.

It was the first series start for Engage, a graded stakes winner last year.

Division leader Laki, owned by Hillside Equestrian Meadows, lost a bit of ground while wide on the far turn but kicked in late to pick up third. The winner of the Frank Whiteley Stakes at Laurel Park in the first round of the series qualified for a chance at bonus money and now has 18 points.

Trainer Damon Dilodovico didn’t race Laki, last year’s division champion, at Delaware Park because of a strangles situation, and then the gelding had a minor training setback. The Bensalem marked his first start at Parx.

“He ran very well today,” Dilodovico said. “Watching him run, though, I think he might have just hated the track.”

Ballybrit Stable’s Dynatail is now two-for-two in MATCH competition this year, and trainer Michael Dini is looking forward to the final leg at Monmouth.

“That’s the plan,” said Dini, who is based at Monmouth. “I would have run her at Delaware (after her victory in the Susquehanna Stakes at Penn National), but I didn’t want to take the chance of having her come back sick.”

Dynatail was sent to the front in the 1 1/16-mile PTHA President’s Cup under Chris DeCarlo and quickly met with pressure from Notapradaprice, winner of the Grade III Dr. James Penny Memorial at Parx in her previous start. The two put on a quite a show with a back-and-forth duel that ended with Dynatail a neck in front in 1:41.93 for the distance.

“They came to her early, but she wouldn’t let them by,” DeCarlo said.

Dynatail now has 20 points to lead her division. Live Oak Plantation’s Souper Striking, who checked in eighth in the PTHA President’s Cup, now has 7 points and did qualify for a chance at bonus money. 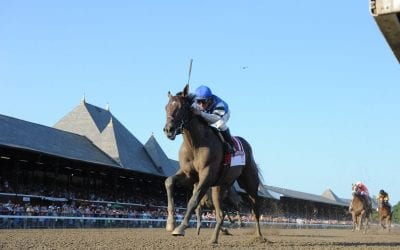 From the Spa: August 14 Midlantic-breds in Saratoga stakes

‘From the Spa’ keeps you up to speed with all the Midlantic-breds running in Saratoga stakes this summer. 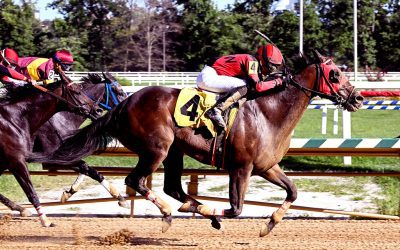 Will Humphrey returns from injury with a flourish

Jockey Will Humphrey, injured in a scary spill less than three weeks ago, returned with a flourish today at Laurel Park, winning twice.

From the Spa: August 10 Midlantic-breds in Saratoga stakes

‘From the Spa’ keeps you up to speed with all the Midlantic-breds running in Saratoga stakes this summer.

Colonial Downs will host a pair of two-year-old stakes for Virginia horses, and Maryland-based trainer John Robb will saddle four, two in each.