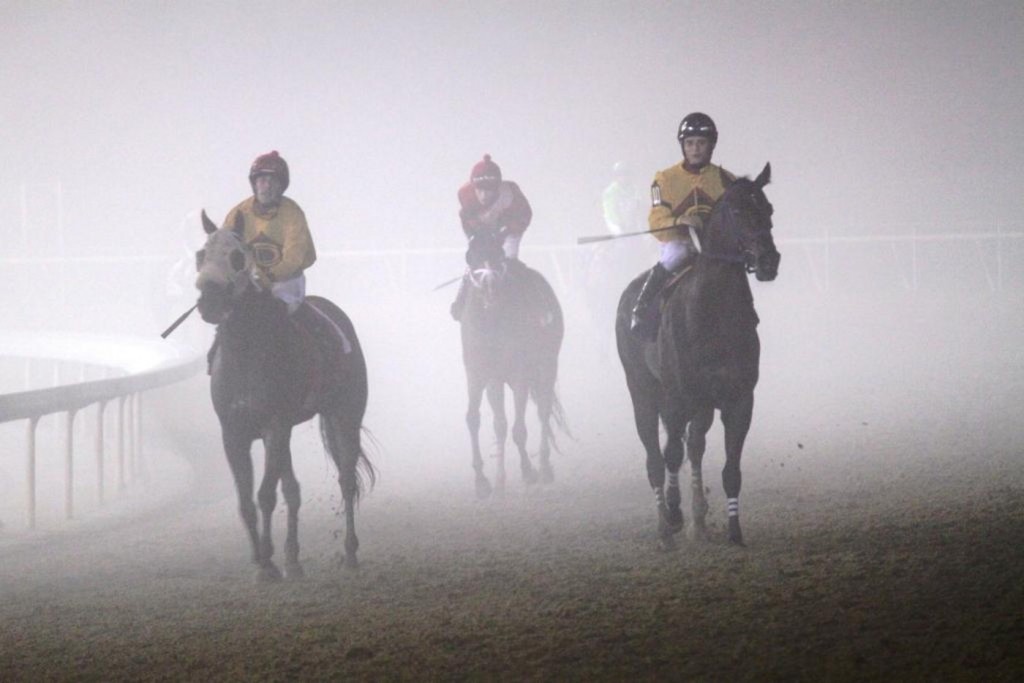 Horses emerge from the fog on opening night 2013 at Colonial Downs — the track’s most recent opening night. Photo by Nick Hahn.

The era of good feelings in Virginia horse racing is over — before it really even started.

Yesterday at the first meeting of the Virginia Racing Commission meeting this year, the Commission’s chief fiscal officer reported that Colonial Downs has withheld over $400,000 in purse funds generated by EZ Horseplay that were expected to go to the purse account managed by the Virginia Horsemen’s Benevolent and Protective Association (VHBPA).

That news came one day after the company had announced the immediate closure of its remaining off-track wagering facilities and its EZ Horseplay advance deposit wagering (ADW) company and laid off its remaining 32 employees.

The track and the VHBPA have been at sword’s point for more than a year, with no contract in place.  The most high-profile casualty of the battle to date has been the 2014 racing season.

Jim Weinberg, counsel for Colonial Downs, asserted that without a contract with the VHBPA in place, there is “no mechanism” and “no authority” to require the payment of funds generated by the ADW service into a purse account controlled by the “majority horsemen’s group.”

What’s more, Weinberg added, the Virginia Racing Act, which governs racing in the state, is vague on how a majority horsemen’s group is identified. If it were clear, he claimed, there would have been no need to define “majority horsemen’s group” in the pending legislation that passed both houses of Virginia’s General Assembly this spring and, once signed by Governor Terry McAuliffe, would go into effect on July 1.

The issue of what constitutes the majority horsemen’s group is one created by Colonial Downs itself.  During contract negotiations last spring, Colonial Downs attempted to attain legitimacy for a newly formed horsemen’s group in order to supplant the Virginia HBPA, the longtime representative of the state’s horsemen, at the bargaining table.  The resulting impasse stifled live pari-mutuel racing at Colonial in 2014.  Since then, a few of Colonial’s OTBs have remained opened for harness wagering only and as EZ Horseplay outlets.

The Commission will hold a hearing to determine the validity of Colonial’s claims.

“We’re happy to explain our position at the hearing,” said Weinberg.

An amendment to the newly passed bill that would reopen Virginia OTBs was recommended by the Governor last month and heads to the General Assembly’s veto session next week.  That amendment would allow a non-profit industry stakeholder organization, such as the recently created Virginia Equine Alliance, the opportunity to apply for licensing of up to 10 OTBs in Virginia should Colonial Downs fail to make application for a similar licensing status by August 1, 2015.  Colonial surrendered its operator’s license last October.  The Virginia Equine Alliance is comprised of the Virginia Thoroughbred Association, the Virginia HBPA, the Virginia Steeplechase Association and the Virginia Harness Horsemen’s Association.

The Commission at its December 12, 2014, meeting granted a conditional approval of all ADW licenses in 2015 subject to a compliance review by Commission staff but directed Bernie Hettel, the Commission’s Executive Secretary, to “stay the expiration of any licenses until such time as the VRC can conduct further proceedings.”  The Commission didn’t reconvene until April 8.

“EZ Horseplay is entitled to their day in court,” admitted Commissioner Clint Miller during the deliberations.  “Our action was ambiguous to the people being regulated.”

David Lermond, the VRC’s Fiscal Officer provided an accounting on the status of Advance Deposit Wagering, citing that a balance of $409,351.49 as of March 31 has not been paid by Colonial Downs to the Virginia HPBA.  All other balances have been paid by the remaining ADW companies licensed to operate in Virginia (Xpressbet, TVG and Twinspires) and are in good standing.  Colonial Downs has paid the Virginia Harness Horsemen’s Association; it has a contract in place with that organization.

All of these developments — Colonial’s withholding of payments to the purse account and its decision to shutter its wagering operations — came on the heels of a legislative session in which the track, horsemen, and breeders had worked together to pass legislation designed to get Virginia racing back on its feet.

Since then, Virginia horsemen and Colonial Downs had been negotiating a deal in which the horsemen would lease Colonial’s facilities and run a summer meet there.  No deal was obtained prior to Colonial’s self-imposed deadline of April 1.  Colonial President Stan Guidroz described Colonial’s current status as being in “an indefinite holding pattern.”

Colonial laid off many of its employees earlier in the week, some of whom stated, on the condition of not being identified, that they were told not to attend the April VRC meeting at the risk of losing severance pay.

Meanwhile, Colonial’s hand appears to be weakening.  The Virginia Equine Alliance’s Jeb Hannum said during the meeting that the organization is pursuing racing days on the flat, perhaps as early as this year, at traditional steeplechase venues in Virginia such as Morven Park, Oak Ridge, Great Meadow, and other privately owned sites.  The Virginia Gold Cup, which is held at Great Meadow, has been approved for flat racing on May 2 and has published conditions for three races, plus two extras.  Wagering on the Kentucky Derby itself has also been approved at the Virginia Gold Cup.

In other commission action, the Virginia Breeder’s Fund Management Contract was awarded to the Virginia Thoroughbred Association (VTA), the only entity that has ever managed the contract.  The Commission also approved the owner bonus awarded for the Virginia Gold Cup races scheduled for May 2, the first Saturday in May.  J Sargeant Reynolds was re-elected as chairman of the commission while Charles Steger, PhD at Virginia Tech, was introduced as the newest member of the commission, replacing Stran Trout.