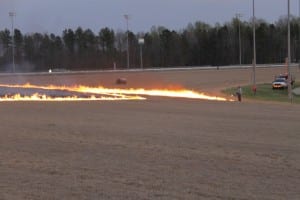 As April moves into May and a nation’s Thoroughbred eyes are focused on Churchill Downs, the wire is coming up fast on racing stakeholders as they haggle over Virginia racing dates.  The outcome appears now to hang on how Colonial Downs’s leadership responds in deep stretch.

“I don’t know where we are,” said Virginia Racing Commission executive director Bernie Hettel about the latest proposal on the table.  “Colonial is taking it under advisement.”

According to several sources, the Virginia Horsemen’s Benevolent and Protective Association (VHBPA), the recognized entity representing Virginia horsemen, has ended its opposition to a 25-day, five week racing schedule; it has agreed in concept to such a format, the sources said.  That format was initially awarded by the Virginia Racing Commission at its December 11, 2013 meeting.

The question now is whether Colonial Downs — which in December accepted the five-week, 25-day format — remains willing to do so.  A lot has happened since then.

Colonial Downs, despite initially proposing 12 days of racing prior to the December meeting, had been willing to move forward in the five-week format after the Commission adopted it.

The VHBPA’s reluctance came as it maintained that the 2013 meet — the state’s shortest since 2001 — had failed to attract horsemen, impacting average field sizes, attendance and handle.

The Commission, for its part, had hoped that such a “status quo” approach  would enable the stakeholders to defer the issue for a year until a “blue ribbon” committee could reconvene to develop a long-term plan.

At the beginning of February with no contract between the horsemen and Colonial in place, the VHBPA pulled the Thoroughbred signal from the eight off-track wagering facilities Colonial Downs operates in Virginia.  The VHBPA has also banded with horsemen brethren in other states to limit the signals offered by Colonial’s advance deposit account wagering platform, EZ Horseplay. Among the tracks not available on EZ Horseplay are Gulfstream, Tampa Bay, Oaklawn, and Hawthorne.

As time went on, the Commission advanced several different proposals — typically with a similar or slightly lower number of days but spread over more weeks — that the VHBPA accepted but which Colonial rejected.

In response, Colonial offered three proposals focused on a six-day racing festival — with scattered additional days — that were rejected by the VHBPA.

A March attempt at mediation failed miserably, with the mediator himself calling a halt.

Colonial Downs has even attempted to form a new horsemen’s group that it hoped would supplant the VHBPA at the bargaining table and which would, presumably, be more amenable to the track’s goals.

Now, the Virginia Racing Commission will meet again on Wednesday, May 7, and the status of the racing dates in this latest proposal is sure to be on the agenda for discussion and debate in hopes of ending an impasse that began at the conclusion of the 2013 meet.

“I don’t know what’s going to happen,” commented Colonial President Ian Stewart.   “It would have been nice if they agreed to it three months ago.  We’ve lost a lot of money in the last three months.”

Colonial’s biggest asset, its Secretariat Turf Course, just received its spring treatment of fertilizer in preparation for the summer growing and racing season after having been torched by track superintendent J.D. Thomas in a controlled burn earlier this month.

“It’s hard to start over again,” added Stewart.  “The world’s a little different place, but I wouldn’t rule anything out.”

Colonial Downs once agreed to the five-week, 25-day format.   Will they do so again?