The distance that separates steeplechase events and racegoers has always been the width of the fence.  But in many venues across Virginia, that previous distance seemed much farther. With the introduction of pari-mutuel wagering, the Gold Cup this year is hoping to narrow that distance.

Expectations for increased interest are running high at this Saturday’s International Gold Cup, held in The Plains, Virginia, especially with the introduction of new wireless technology standing ready to enable patrons to wager via smart phones and other mobile devices.  Starting Saturday, win, place, show, exacta and trifecta wagering will be just a keypad click away.

“Having pari-mutuel at every tailgate is the key to being successful,” observes Mike Pearson, a consultant for the Gold Cup. 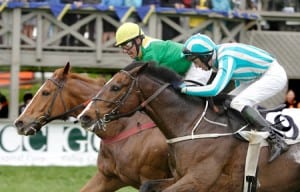 The Gold Cup is betting that fans will find finishes like this even more exciting if they have wagered on it. Photo by Virginia Thoroughbred Association.

In May, patrons at the Virginia Gold Cup at the same venue were offered pari-mutuel wagering for the first time at the steeplechase event through wagering machines and teller windows. With a pre-paid wagering card on Saturday, patrons will find their options expanded to include moile wagering via an application, account number and PIN.

“In the past we might have 30% of people talking about racing and 70% of people enjoying the party,” said Dr. Alfred Griffin, Director of Racing of the International Gold Cup. “This spring, many more people were talking about and paying attention to the racing. They patiently stood in a long line to bet.”

In order to use the wireless technology, handicappers will need to pre-purchase wagering cards either on-line, at the Gold Cup office in Warrenton, VA, or at The Plains on race day. The Fast Bet Mobile platform will be available on mobile devices upon arriving for the races. With pari-mutuel racing now a component, the event falls under the jurisdiction of the Virginia Racing Commission, which will regulate the Gold Cup and license participants.

“It should be the way of the future and may replace paper tickets in the future,” observes Pearson.

As in the spring, when $81,000 in wagers was handled, the Gold Cup will have pari-mutuel windows available on Saturday.  That day, officials considered long lines to have been one impediment to increased wagering.  On Saturday, the wireless way should be far more convenient.

Pearson initially heard of the wireless concept being in use at Hoosier Park and thought it would be a natural fit for hunt meets and steeplechase racing. It has been expensive to install and secure a sufficient wireless network. Yet, racing officials are already beginning to see return on investment.

“Sales are up 10 to 15 percent, and the only variable is pari-mutuel wagering,” notes Griffin.  “There is much more interest from a spectator standpoint.”

The wireless app will include live odds, and while the racing video itself will not be online, three “jumbotron” screens will help patrons to follow their horses.

Six races are slated for Saturday starting at 1:30, including the $50,000 International Gold Cup, the $20,000 Steeplethon and $15,000 Old Dominion Turf Championship for Virginia-bred and sired on the flat. A maiden hurdle has been split into two divisions.

While it appears The Gold Cup has lured plenty of horses and spectators, riders are in demand as the meet at Far Hills, NJ, is scheduled on the same day; that meet, featuring the $250,000 Grade 1 Grand National, has attracted many top riders.

[pullquote]“Having pari-mutuel at every tailgate is the key to being successful.” — Mike Pearson, Gold Cup consultant[/pullquote]

“In order to run an event like this, you need horses, riders and spectators,” explains Griffin. “Right now we have two of the three. We need to address schedule within the steeplechase organization. We’re excited about our day on Saturday. The course is one of the few courses that is fully irrigated and fully tiled. The entries themselves have been effective.”

With initiatives to promote Virginia-bred racing at Colonial Downs in stagnation, the traditional steeplechase venues may, oddly enough, provide a new field to attract interest and perhaps even fan participation, (i.e. handle). Don’t look for a windfall to boost purses, but the wireless technology provides a service and a means to tap into interested race goers where they already stand or sit.

“We’ve had a dialogue with Colonial Downs that is synergistic and symbiotic.  Both groups are looking at it in this way,” says Griffin. “When one aspect of our sport shows promise, it helps all of us.”

Attendance at one-day steeplechase events dwarfs that at Colonial Downs; even Virginia Derby Day rarely draws 10,000 fans. The Gold Cup expects 30,000 fans on Saturday after drawing well over 50,000 in May.

The grass on International Gold Cup turf course stands strong with fescue and bluegrass, seven inches in length. Virginia’s racing industry is hoping that by enhancing events like The Gold Cup its roots might one day reach deeper than that.