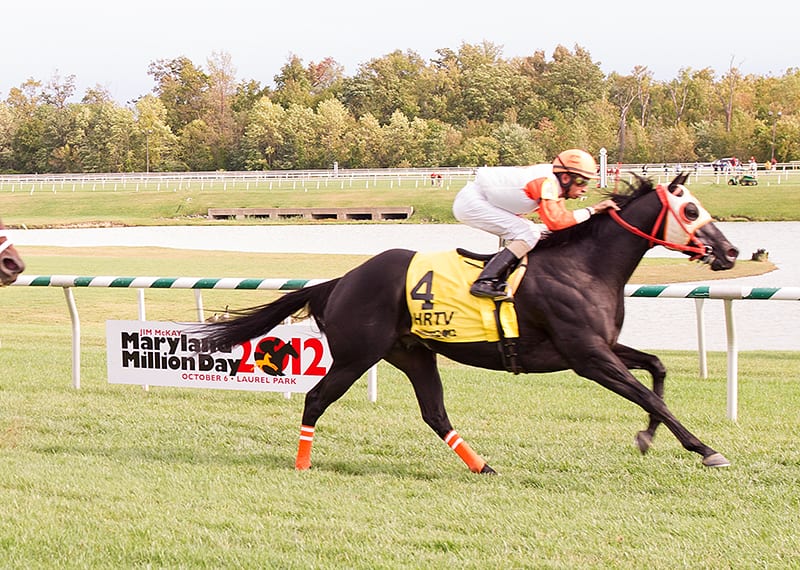 Owner/trainer King Leatherbury informed the Maryland Jockey Club this morning that Ben’s Cat will run in the $125,000 Maryland Million Turf Saturday afternoon at Laurel Park. Leatherbury cross-entered his star into both the Turf and the $100,000 Sprint.

The 7-year-old is looking to become the first four-time winner of Maryland Million races after winning the Turf Sprint the last three years. That race was eliminated by Maryland Million officials earlier this year. The son of Parker’s Storm Cat, who became Leatherbury’s first millionaire last year, has won 23-of-35 starts for earnings of $1,695,640.

“The Sprint has some really fast horses in it,” Leatherbury said. “With the weight I was given (124 pounds-four to 11 more than the rest of the field), I think there were three that could beat me. I am the best horse in the Turf. The only question mark is the one-mile distance. Handicapping these races was fun. Before doing so I thought I would be running in the Sprint but after looking at the numbers, I changed my mind.”

Ben’s Cat will be the 6-5 morning line favorite in the Turf, which also features Roadhog and Change of Command, the 1-2 finishers from last year. Julian Pimentel will be aboard Ben’s Cat for the 24th time. The duo has teamed up for 15 victories.

With the defection of Ben’s Cat, Maryland Jockey Club stakes coordinator Coley Blind expects Ribo Bobo to run in the Sprint. The Jason Servis trainee was cross-entered in the $50,000 Starter Handicap where he was a 2-5 favorite. The son of 1996 Preakness winner Louis Quatorze has won all eight races this year. The Sprint also features defending champion Action Andy and Fersmiley, who has won four straight.

NOT FOR LOVE, DANCE WITH RAVENS TOP STALLION LIST

Introduced in 1986, the Jim McKay Maryland Million, a program of races restricted to the offspring of Maryland-based stallions, continues to receive strong support from Maryland’s extensive breeding industry.

Not For Love, who stands at Northview Stallion Station, leads all stallions with 10 potential runners tomorrow afternoon. Progeny of Not For Love have captured 27 Maryland Million races in the last 10 years from 183 starters, including four victories in 2009 and 2011. His sons and daughters could be competing in six races Saturday.

Another Northview Stallion Station sire, Dance With Ravens, actually tops the list with 11 entries, including a pair of 30-1 shots from Dance With Ravens: Raven Alexa and Steelersoverravens.

Hall of Fame broadcaster Jim McKay originally proposed the concept and remained Chairman of the Board until his death five years ago. Twenty-two times attendance figures have topped 20,000 for the event.

The first 4,000 full-paid admissions and Maryland-licensed owners and trainers will each receive a free Maryland Million Sport Cap. On-track entertainment between races will include two pony races, Suttler Clydesdales, Goshen Foxhounds, Great Falls Vaulters and Special Olympics Maryland and a visit from Joey of War Horse fame, brought to life by puppeteers.

HRTV will have a live presence for the entire card with hosts Dick Jerardi and Caton Bredar on site.

Leatherbury sits atop the Maryland Million trainer standings with 10 victories on “Maryland’s Day At The Races, one more than Dale Capuano.

Jerry Robb, who is tied for seventh all-timer with six winners, has a chance to move up the leaderboard. He has the morning line favorites in the Nursery (Joint Custody) and Lassie (Jonesin With Jerry).

Seventy-five conditioners will saddle horses Saturday at Laurel Park, including 14 with multiple starters.

Pimentel tops all riders with eight mounts. The 32-year-old will ride Ben’s Cat in the Turf and is named aboard morning line favorites in the Distaff (Ju Ju Eyeballs) and Sprint or Starter Handicap (Ribo Bobo).

Horacio Karamanos has seven riding assignments, including Art of the Hunt, the 7-2 choice in the Distaff Starter and Action Andy, the defending champion in the Sprint.

Apprentice Trevor McCarthy, the leading rider at the current fall meeting, has the call in seven races in his initial Maryland Million. The 19-year-old will ride Mystic Love, the 3-1 morning line favorite in the Ladies, and has a mount in the Classic (Wild Louis).

“I definitely think he has a shot,” McCarthy said. “I am pretty excited about the day. I never expected to have this many mounts. It is going to be a great day.”

Forest Boyce will also be busy with six mounts. The 29-year-old will ride 2-5 favorite Eighttofasttocatch in the Classic and defending champ Pagan Priestess in the Ladies.

Ramon Dominguez holds the single year mark with five Maryland Million victories in 2005 and leads all riders with 17 winners, one more than Mario Pino and Edgar Prado. Prado is named to ride Moral High Ground, a 12-1 shot in the Ladies.