Cricket Goodall is the Executive Director of the Maryland Horse Breeders Association and Maryland Million.  She has been involved with Maryland Million virtually from its inception, having joined the MHBA in 1986.  In that time, she’s seen it grow from a great idea to one of the cornerstones of the Maryland racing year.  We spent a few minutes with her to discuss the event, changes that are occurring, and some of her personal memories.

Q. One of the issues that’s received a lot of attention this year has been the changes to the races themselves.  Maryland Million scrapped two races this year — the Turf Sprint and the Oaks — and filled out the 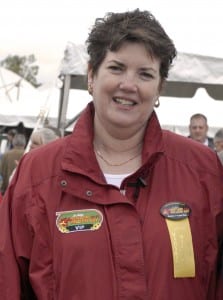 card with two maiden races for Maryland-sired and Maryland-bred horses.  What drove that decision?

Cricket Goodall: We try to look at the races every year and see how they work: Are we getting good fields?  Will people bet on them?  Because that’s the bottom line: we need to have a good betting card.

Along with the Racing Office, we make our best effort to have full fields.  That’s gotten harder and harder to do as the foal crop’s diminished over the years.  So consequently, we did change up some races.  There was a thought that the Turf Sprint and the Turf were cannibalizing each other, and we realized over the years that things like that were happening.  The Oaks had been a race that hadn’t really drawn a strong field over the years.

We rely really heavily on the advice of the Racing Office.  They’re the ones that have to fill the races.  If they think they can fill the races better, we’re going to try to accommodate that.  I want to have full fields: that’s the goal.

Q. Maryland Million is known, in particular, for drawing large crowds to the track — something that’s increasingly a challenge for the industry.  How have you managed to accomplish that?


Cricket Goodall: That’s been part of our mission from the start: to make Maryland Million an event, not just a day with 10 or 11 Maryland-sired races.  From the beginning we’ve tried to have a different feel.  It fits into a good slot in the fall, it’s not too overwhelming for people like the Preakness can be.

[boxify cols_use =”2″ cols =”5″ position =”left” order =”none” box_spacing =”5″ padding =”5″ border_width =”2″ border_color =”blue” border_style =”solid” height =”85″ width =”50″ ]To hear Cricket Goodall recount her favorite Maryland Million memory…[sc_embed_player fileurl=”https://www.theracingbiz.com/wp-content/uploads/2013/10/CGoodalltalksMcKay.mp3″][/boxify]We built it that way, and it stayed.  When it started, it was new, and it was exciting, and it was Jim McKay.  It ended up being the fall event at Laurel.  It just had a lot of things going for it.  Plus, we’ve kept the prices down and added all sorts of other entertainment for people and families.  Some other states haven’t added the additional levels of entertainment to make their day more than just another clustered day of stakes.

I think, too, that it’s attracted more and more families over the years.  From the beginning, Maryland Million had a real Maryland flavor: it’s a Maryland event, and we played that up.  Our sponsors were primarily Maryland, our horses were Maryland, and I think over the years that grew to entice some new fans.

Q. The last decade or so has challenging in Maryland, particularly for the breeding industry.  Does an event like this take on a larger meaning in that context?

Cricket Goodall: I think it definitely does.  We’re focused with a Maryland flair: there’s an ownership of all the breeders and owners that are here.  And there are so many great back stories.  We have 11 races, and almost all of them have a really great story.

[Maryland Million keeps] reinforcing that fact, that I’m a little guy but I might have a chance.  In my opinion, it should be a chance for that to happen: you want to reward people for playing the game and staying in it.  I’ve had people tell me that Maryland Million is their Preakness.  They might not have a chance to win in a stake on Preakness day, but they can win a Maryland Million race.  I think that’s different from any other event day in Maryland.

You give those people a chance, and they don’t have a chance very often.

Q. What’s next for Maryland Million and the industry?

Cricket Goodall: What we need right now after 28 years — what the whole industry needs — is another vision that produces other visions, the same way the Breeders’ Cup produced the Maryland Million and the other state events.

Because that’s really how it worked: Jim McKay was in the plane on his way home from the first Breeders’ Cup in 1984, and he said to his wife that he wanted to do the same thing in Maryland.  He got together with Billy Boniface and Chick Lang and some other people, and that was the beginning of it.

Q. For you personally, what’s a favorite Maryland Million memory?

Cricket Goodall: When Jim McKay’s horse won.  It was a two year-old that he named for his son — Sean got a horse instead of a car — and Billy Boniface trained the horse.  He brought Laffit Pincay in to ride… The horse really didn’t have much paper, but Billy, somehow, being Billy, got Pincay to ride the horse.  Coming up the stretch, Pincay just practically lifted the horse up.  He was on the rail and probably three or four lengths out of it, and you were thinking, ‘He’s trying but he’s not going to get there.’  I don’t know how Pincay did it, but he won by a nose…

It was fun to see how excited Jim McKay was, and Billy.  Because Jim McKay was so invested, and this event was his… To watch his success and watch him be proud of it was really neat.