“The only place that’ll have us.”

Ed Stanco is at Todd Pletcher’s barn with his son Adam and Adam’s wife Kate. Mike Tyburski, a long-time Stanco friend and a partner in King of Prussia Stable, is there, too.

“There’s nothing more to say, really,” says Stanco, petting Princess of Sylmar. “Marty Kelly [another partner], I’ve known for 30 years. The other guys, we’ve known each other at least 10 or 12 years. We’ve all been in together.”

The filly is basking in the attention, resting her head on Stanco’s shoulder, nudging him when he gets distracted from petting her. “What a ham,” he says.

As someone notes that the excitement builds, Tyburski chimes in. “Oh, boy, does it ever,” he says.

“Because it’s all been so much fun,” says Stanco, “but now everyone in the world knows about her…There’s my man!” he says, greeting one of Pletcher’s employees. 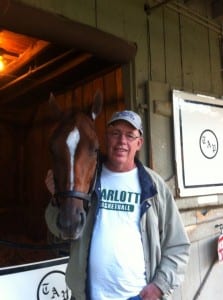 Ed Stanco and Princess of Sylmar. One of these is not nervous. Photo by Teresa Genaro.

“I don’t know that it’s nervous,” he says, asked about how he feels. “All of a sudden now, time is really accelerated…every minute…” He pauses, reconsiders, and starts laughing. “Yeah, I’m nervous.” He looks at Princess of Sylmar. “Are you nervous?”

He turns again as Ginny DePasquale, Todd Pletcher’s Saratoga assistant, walks down the shedrow. “Hey, Ginny, how are you?”

“You know, it’s a horse race, and anything can happen in a horse race,” he says philosophically, almost as if he’s trying to convince himself. “We all know that.  So we just want her to get over the track, come back healthy, and if she can pass the rest of them, that’d be great.

“So today, she knows. ‘Wait a minute, my friends are going out on the second string…how come I’m not there? And why is the window closed in the back of my stall?’”

He switches from her routine to his own. “I come to the barn most mornings if I’m around.  My routine race day is I don’t go to bed at night. It’s hard to sleep–how can you? I mean, this is big.  Right?

“We’ll be here for just a little bit and then I’m going to go back and I have a bunch of activities today, a TV show at 10:30, a NYRA lunch. We’re having another dinner at Longfellow’s tonight, because we couldn’t book a place that late on Saturday night and we’re going to have about 85 people. We know the place and it’s the one big place you can get a spot.”

Jokes Tyburski, “It’s the only place that’ll have us.”

“Yeah,” Stanco concedes. “that’s a better way to put it.”

In demand from various media outlets, from local stations to NBC, Ed Stanco finishes up a segment with Mark Cusano on Down The Stretch on Capital OTB TV and chats with handicapper Anthony Mormino before turning to a reporter.

“I’m a wreck,” he says. “I’m starting to walk in circles. But you guys make it easier because I get to talk.”

The words keep coming — almost without a break.

“I’m going to go home and come back later. I just can’t sit there. It’s big!” He says it almost with a little despair, but also with humor.

“This is totally different than the Kentucky Oaks. There, there are just swarms of people and you go through this whirlwind. Here, it’s a lot different.

“Oh, yeah, this is bigger. This is the whole thing. This is it.

“The expectations–I mean, my God, we got every paper this morning and there she is!   Thank God it’s me being nervous, not her. You saw her this morning–can you believe it? That’s how she always is. She’s the best. So that’ll make it good.”

He’s asked what he does to calm down.

“I can’t do anything to calm down. Just let the time go. I’ve been counting out the hours for five days and now we’re getting there and now it’s the time.”

As it did earlier in the day, his focus goes back to the barn. “I gotta say: it’s how everyone prepared her. You were at the barn this morning, you saw how passionate those guys are.  All of them. I’m there frequently enough and they’re just they’re all so dedicated, the team here, the team at Belmont with Mike McCarthy–they are so dedicated to this. They’re passionate. They’re like us–they’re passionate about the sport and that’s what makes it so much fun.”

He’s standing just outside Clare Court on a perfect Saratoga morning, looking across the track at the old clubhouse and grandstand. He grew up in Schenectady, not far from Saratoga, and remembers his visits to the track as a child.