“You gotta get ‘em when they’re young.”

With about 90 minutes to post, it’s family time. Stanco and his wife are trying to figure out where their three sons are so that they can give them their tickets; granddaughter Avery, nine years old, is talking about her favorite jockeys, which include Irad Ortiz, Jr., Joel Rosario, and Javier Castellano, rider of Princess of Sylmar.  Asked what she likes best about coming to the races, she ponders a moment and says, “Probably…getting to the winner’s circle.”

“It’s absolutely the most fun,” says Stanco, “to do this with our partners and with our family. The other day, Avery said, ‘Grandpa, I like Joel Rosario because he gets ‘em out quick.’ I said, ‘Oh, good, she’s hooked. I have someone to take me to the track when I’m old.’ You gotta get ‘em when they’re young.” 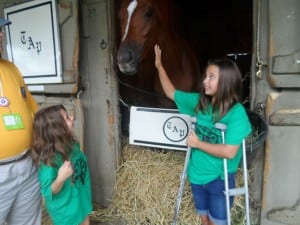 His sons Adam, Randy, and Eric are all at Saratoga, as are his four grandchildren. Their presence isn’t doing too much to calm him down.

“It’s just the atmosphere,” he says. “But now that things are moving along, I’m much better. You just want to see her do well.” One suspects that he might be trying to convince himself.

“Another thing,” he continued, “is when you go to the races, you should let your emotions go. You should let it come to you. That’s all part of the experience, and it’s so different when I come to the races to handicap, which I really haven’t had much of a chance to do this summer.

“The other day I came to the track with my son and instead of coming up to the clubhouse, where we usually go, we were sitting at a picnic table just grinding it out.”

“When I come to the track like this,” he says, talking about a big stakes day, “it’s a very social event. When I come to handicap, I could go eight hours without talking to anyone except to the guy next to me.”

“It’s a different experience,” he continues, “and I think one of the [challenges] at the racetrack is how you get people to understand that part of the experience. Not everyone will, but once people do get into that, it’s a completely different game.  And it’s very intense.”

He’s getting warmed up, as he tends to do when talking about the state of racing.

“That’s why I say, we’ve got to get the Breeders’ Cup back to New York.  It’s a sin that it’s not here, it’s a disgrace, really, and I even suggest you do it at Aqueduct. ‘Well,’ they say, ‘people won’t come.’

“Well, you know what? All those people that are there in the winter? They might not be executives or any of that.”

“They’re into racing. And they are the backbone of everything we do, and they love it as much as anyone else, and it’s why we should support them.”

He changes the subject going again, going back, as he often does, to his trainer.

“Everyone thinks, ‘Well, Todd’s got the big owners’ and all that, and my view is, ‘Well, if he can do what he’s done with this filly…’ Really, it’s all about how he trains them, and that’s why he has consistent winners.  You give him any group of horses and he’s going to win because he knows how to do it. And that’s where I feel special, that I was able to hook up with him.

“And another thing, I’m pretty close with Todd but I rarely speak to him. Other guys bug him all the time; I let him do the work, and in fact, we haven’t really sat down and had a conversation since the last race. I’ll text back and forth with him, but not a lot.

“But when I go the barn in the morning and see the filly and I’ll see him and he’ll be, ‘Morning, Ed’”—here, Stanco does his best faux-gruff, deep-voiced Pletcher imitation—“and I’ll say, ‘Hi, Todd,’ and I like it that way because he’s a professional and I treat professionals like professionals and let him do the work.”

And if Princess of Sylmar — the Princess, as he and his partners call her — loses?  He pauses before speaking. His first reaction is one of appreciation.

“I just think…I just think…look at how much she’s done. I mean—[her losing] can happen. I don’t like to think about that because I don’t want to jinx her, but if there’s anything I know about this game—I mean, that’s why we do it. She’s out there to win. It’s all her and if she doesn’t win, so what?

“It’s been a great, great experience.  I really don’t think about, ‘Wow, she can tie up the three-year-old championship.’ It’s a filly that’s running and doing her best, and she’s given us incredible joy.  So that’s how we look at it.”