“That kind of thrill”

Ed Stanco hasn’t shown up yet, but Mike Tyburski is here to see his Alabama winner.

“Storm Dixie was our first horse together, the Princess’s mom,” he reflects. “And that was about seven years ago.  Ed put a group together of the guys we worked with; there are six of us in on this horse. Storm Dixie won her maiden here on the 25th of August [2006], so almost seven years ago.  She never won again, but she was competitive.”

Princess of Sylmar, Storm Dixie’s daughter, is the result of the first mating Ed Stanco ever planned and is the only horse he has racing at the moment.

“You could make a movie out of this,” says Tyburski. “We have our own little Seabiscuit here, I heard someone say.” 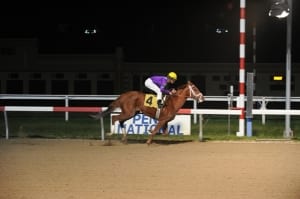 Stanco shows up, with Bella and Avery, a little after 7 a.m.  Juggling his roles as owner of a division-leading filly and grandfather, he can’t talk until he takes Avery to the bathroom.  Waiting for her, he says, “I was up watching the replay over and over at 3:00 this morning. I slept for about an hour.”

Even after repeated viewings, he’s still incredulous.  “I don’t know how to describe that race. The other two [the Kentucky Oaks and the Coaching Club American Oaks] were races. I mean, she’s in the Alabama and she treats it like a public workout. You know what I mean? I mean, she had to work, it was a mile and quarter, but she treated it like it was nothing,” he remarks in a voice full of wonder.

He chats with a barn worker and is hailed by a jockey passing by on the way to work a horse.

Castellano moves on, promising to come back to talk, and Stanco resumes his conversation.

“I told my kids before the race–because they’re always jumping on me–I want to watch the race through the binoculars, so don’t jump on me.”  They did not appear to have obeyed his order.

Twelve hours after the race, he is resolute about the Breeders’ Cup, even if it means losing the three-year-old filly championship. “No,” he says. “I’ve always said it’s one race at a time. It’s winning the race you’re in, and if another filly goes and beats by Royal Delta by 20 lengths, fine. That’s meant to be.

“She’s growing as a three-year-old. If she grows, she should be a very good four-year-old, which is what I really want. And there will be time for that,” he says, referring to the Breeders’ Cup, to which Princess of Sylmar isn’t nominated.

“Even if we had nominated early and done all that, making the big trip out to California, there would be so much going on…we’ll wait until next year.”

“It would be fun to bring her to Penn National,” he says. The Pennsylvania-bred Princess of Sylmar raced twice there, breaking her maiden last November before heading to New York.  “They love her there. By the way, it’s a very nice track, and when you go to Penn National and you see the way they built the stands, there could be a few lessons learned there for our friends here.”

“What about the one in Delaware?” pipes in Avery.

“Oh, Delaware’s great, too,” he assures her. “That’s the track we always go to. We may be at the Delaware Handicap next year.

“There’s a lot to be learned from some of the little tracks. Penn National’s a beautiful place.”

Partner Marty Kelly is here, too, which gets Stanco talking about about the other Marty Kelly, the father of the Marty Kelly who owns a piece of Princess of Sylmar. 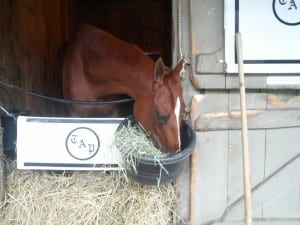 Well earned face in the feedtub. Photo by Teresa Genaro.

“He went to Aqueduct and Belmont every day of his life,” says Stanco, and despite what has to be hyperbole, you almost believe him. “Every day. So for him–you think I’m happy, imagine a guy going to that inner dirt track every single day and going back to his guys…

“I remember when we won with Storm Dixie, he brought her into the winner’s circle. All his buddies, he couldn’t wait to get back to Aqueduct and say, ‘Here I am. I got my winner.’

“He was just so thrilled. He understands racing and his son Marty has been involved–he knew more about racing than I ever did. This is beyond once in a lifetime.”

Stanco could have sold Princess of Sylmar on more than one occasion; the first offer came in after an allowance race at Aqueduct in December. “It was a very good offer,” he said. “Todd told me about it and I said, ‘You know, hmm…” and then what happened was they came and they upped the offer and it was very good. And I sat with Todd and I said, ‘The economics of this offer make a lot of sense, but I’m on the fence.’

“Todd said, ‘Look, you understand the numbers, you understand all of that very well, but there’s one thing you gotta think about,’ — and this is back in December [before the horse’s first stakes victory] — he said, ‘if she goes on to do well, and I really think she can, and she goes on to really do something, will you be able to live with that the rest of your life?’

The granddaughters are getting antsy and Stanco heads home with them, but Kelly, his partner, sticks around, to spend a little more time with the filly.

“I used to root for Buckpasser,” he says. “Dr. Fager, Damascus. We even named our Great Dane Damascus.”

He’s from Queens and met Ed when the two of them lived in Cincinnati in 1979, working for the same company.  He lives in Chadds Ford, Pennsylvania now.

He seems pretty satisfied with the way it all worked out, although his father didn’t make it to Louisville to see her run.

“It was too much for him,” he says. “He watched it from his ‘desk’ at Belmont.” Kelly laughs.

His father will be 86 in November, and he came to Saratoga for the Alabama. “He came up on the Belmont bus,” says his son. “He lives in Rockaway Park. He’s got a 15-minute ride to Aqueduct and maybe a 20-minute ride to Belmont.”

Less voluble than Stanco, Kelly seems no less overcome with what the Princess has accomplished.

“I’m really trying to take it all in,” he says quietly. “We know what the odds are. We’re all actuaries. We know what the numbers are.  It’s better than winning the lottery. You don’t get that kind of thrill [like you get] with your horse coming down the stretch.”