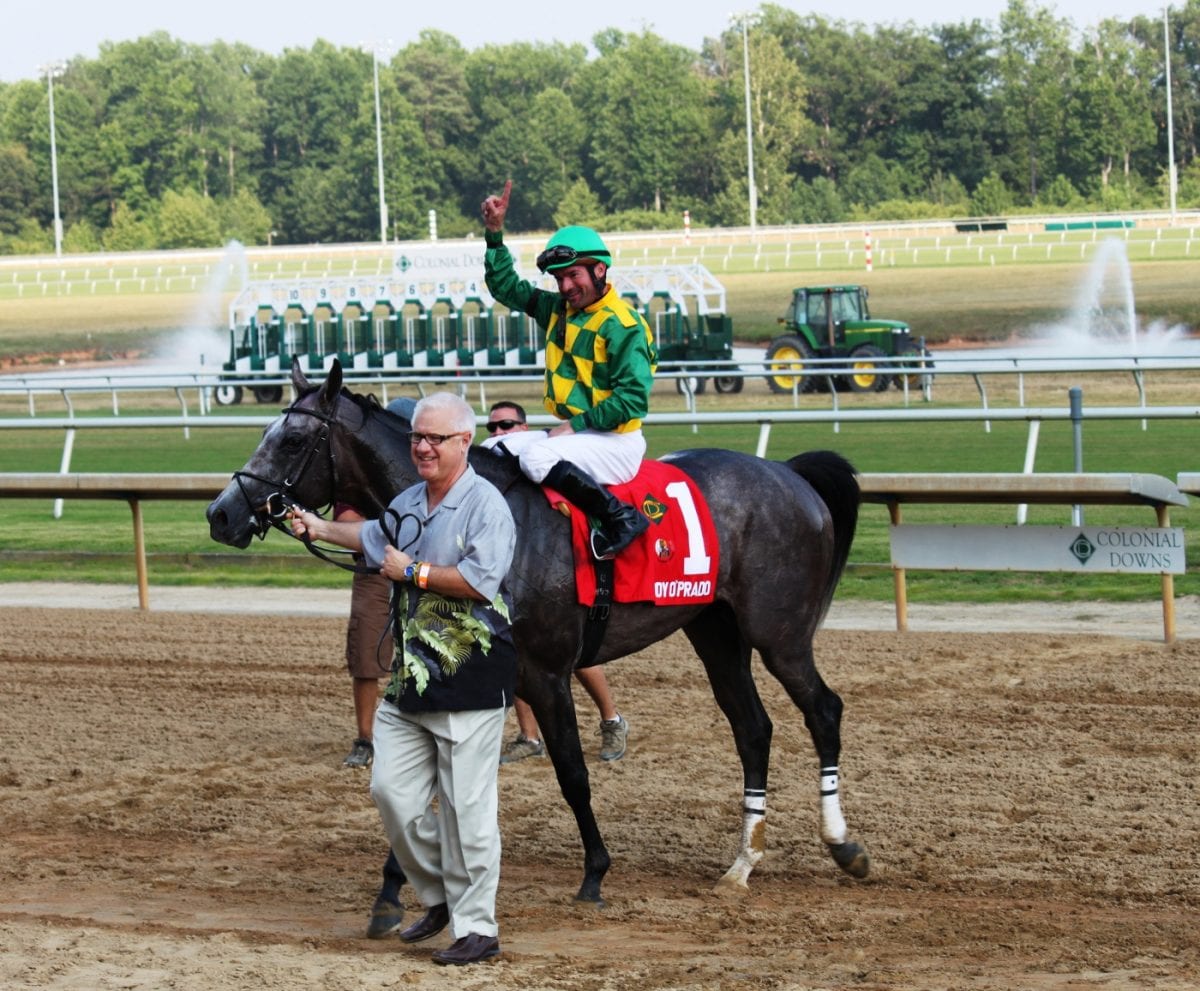 It’s a little over two months away from the signature race at Colonial Downs, yet the road to the Kentucky Derby could cut through the field for the grassy Virginia Derby. 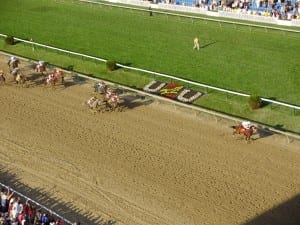 Big Brown – here, winning the Preakness – is one of many recent Triple Crown runners with turf experience. Nick Hahn photo.

All that may be about to change.

With the scratch of Black Onyx, only four horses in this year’s Kentucky Derby starting gate had any turf experience.   That made Churchill Downs officials happy but may pose challenges in New Kent.

Implemented this year for the first time, the new Road to the Kentucky Derby Point System bypassed American turf racing.  The first race — and only turf race — on this year’s “Road” was the 2012 Juddmonte Royal Lodge at Newmarket in England.

“We had many debates internally when we were choosing the path that the horsemen would take,” said Darren Rogers, Senior Vice-President of Communications at Churchill Downs.  “(The new system) rewards the horses that are best prepared for the race.”

The transition from turf to a mile-and-a-quarter on the dirt prior to the Kentucky Derby may be a leap many hardboot racing officials preferred to avert.  The new method appears to have been well vetted and well thought out.

But prior to this year’s Derby there were some notable turf runners in the Derby.  Derby winners Barbaro and Big Brown had wins on the turf, the former’s including a graded score, while Paddy O’Prado and Comma To the Top capitalized in part on graded earnings on the turf to earn a shot at the Run for the Roses.  Animal Kingdom ran a game second in a turf race two months prior to the Derby; indeed, his only dirt win to date remains the Kentucky Derby.

Court Vision and Showing Up are among the other Triple Crown types who found the Colonial Downs grass greener upon the conclusion of the Triple Crown.

Animal Kingdom’s Derby year (2011) may have been the apex of turf infusion in the Derby field.  Nine starters on the first Saturday in May had prior outings on the grass, most of them several times (Brilliant Speed, Twice the Appeal, Comma To the Top, Derby Kitten, Twinspired, Master of Hounds, Santiva, Animal Kingdom and Soldat).  In fact, prior to April of 2011, Crimson China was trainer Graham Motion’s dirt horse with Animal Kingdom being focused on the turf.  If not for a dull outing by Crimson China in the Bluegrass Stakes, Animal Kingdom might not have found the Kentucky Derby starting gate.

However, Churchill’s efforts to maximize the quality of the Kentucky Derby field and increase attention on the already highly visible Triple Crown trail prior to the Derby take precedence — at least to Churchill Downs, Incorporated —  over what happens after the Kentucky Derby field disbands.  After a small amount of initial criticism, the concept has enjoyed widespread support, so don’t expect dramatic changes.   Rogers notes that “road races” this year experienced increased handle and attendance.

[pullquote]The road to the Kentucky Derby could cut through the field for the grassy Virginia Derby.”[/pullquote]

“The committee will reconvene shortly and discuss the 2014 route,” explains Rogers. “I believe there could be some tweaks.”

Perhaps Churchill’s turf slight won’t disrupt what have been some great summer moments at Colonial Downs.  But it may rob Virginia of some stars.  For example, Barbaro’s stablemate Showing Up won the Colonial Turf Cup after running sixth in the Kentucky Derby — and just a month after Barbaro had broken down in the Preakness, Showing Up’s win giving owners Roy and Gretchen Jackson some solace during a difficult time.

And Paddy O’Prado’s presence on the Colonial Downs backstretch remains legendary.  He swept the Colonial Turf Cup and Virginia Derby in 2010 after finishing third in the Derby and sixth in the Preakness.  The roan colt won the Palm Beach (gr.IIIT) as a maiden on his road to the Derby, and more than 40 percent of his approximately $250,000 in graded earnings had come on the green.

Churchill is not concerned.   “We were delighted with the outcome, and it actually turned out like we thought it would,” Rogers adds.

Would it hurt, however, if the Road to the Kentucky Derby wasn’t sprayed completely with herbicide?