Fifty years after Secretariat galloped into our hearts and the history books, the blue and white silks of Meadow Stable are a familiar image for any racing fan. Secretariat was no one-off, though; rather, he was the product of a high-powered breeding operation known for quality.

Two decades before Big Red was foaled at Meadow Stud in Doswell, Virginia, the farm produced its first champion from a winless mare and a stallion with an unfamiliar pedigree.

In early 19th century Virginia, Charles Dabney Morris built The Meadow on land near the North Anna River. The family sold the land in the early 1900s, but, decades later, Christopher Chenery, father of Penny and a descendant of The Meadow’s builder, used the profits of his success as an engineer and public-utilities executive to buy the property back. From there, Chenery made the Meadow into a thoroughbred nursery that would produce classic winners.

At the Xalapa dispersal sale in 1939, Chenery picked up three yearlings by 1926 Kentucky Derby winner Bubbling Over, including the filly Hildene, purchased for $750. Winless in her eight starts, Hildene would produce a stakes winner in Mangohick before Chenery sent her to Princequillo, a relatively new stallion standing at Arthur Hancock’s Virginia estate Ellerslie.

The Irish-bred Princequillo had been imported to the United States in the early years of World War II, winning races like the Jockey Club Gold Cup and the Saratoga Cup. Sired by the Belgian stallion Prince Rose, Princequillo’s pedigree was relatively unknown in the United States, but that was about to change. In late February 1947, Hildene would foal a bay colt with a splotch of white on his forehead, Hill Prince.

Quality from the jump

At two, Hill Prince broke his maiden in his first start, a 5 ½ furlong maiden race at Aqueduct. Despite his tendency to start slowly, the son of Princequillo and Hildene was able to win at the shorter distances like six furlongs, steadily making progress through the race to take the lead in the stretch.

He won six of seven starts, including three stakes, to earn Co-Champion Two-Year-Old Colt honors for 1949. More importantly, his running style boded well for the longer races later in his career, especially since his sire had been adept at such distances.

At three, Hill Prince started his season with a win in the Experimental Free Handicap #1 at Jamaica and then took the Wood Memorial by two lengths over King Ranch’s Middleground. In the Kentucky Derby, though, Middleground turned the tables on the Chenery colt: rather than let Hill Prince run free on the lead, jockey Eddie Arcaro took his colt back, following Middleground through the stretch. But he could not catch the King Ranch colt, who won by 1 ¼ lengths. 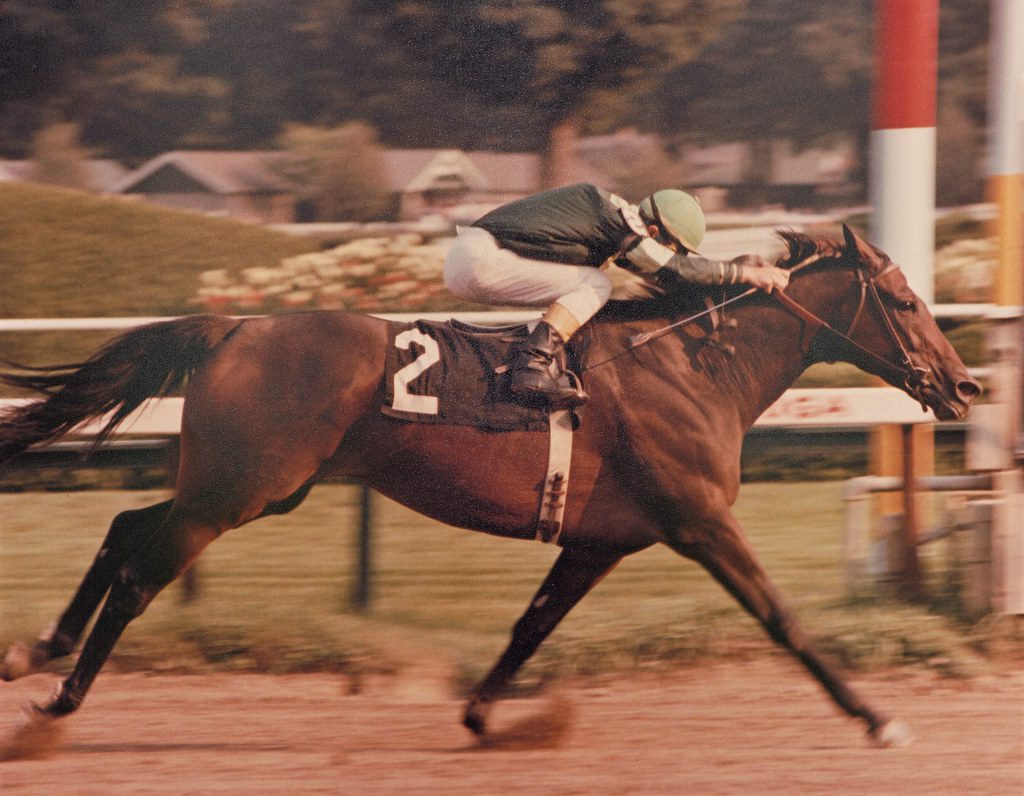 “I let Middleground run interference for me. We followed him through when we moved,” Arcaro said after the Derby. “We were close enough to touch him coming into the stretch. That’s when Boland must have given his horse the word.”

In the Preakness, though, Hill Prince got the better of Middleground, going to the front on the backstretch and getting out to a three-length lead. At the top of the stretch, Middleground had Hill Prince within his sights, but Arcaro gave the Chenery colt his cue in the Pimlico straight, drawing away to win by five lengths.

“He was restrained at the Derby,” an ebullient Christopher Chenery said after the Preakness. “The way we did it today was just let him run the race he wanted.”

For the 1½-mile final Triple Crown classic, jockey Eddie Arcaro put Hill Prince on the lead early, setting fast fractions over the first ten furlongs of the twelve-furlong race. Jockey Bill Boland on Middleground bided his time in fourth, waiting for the Chenery colt to tire. When he did, the Derby winner swept by, winning the Belmont by a length while Hill Prince faded to seventh.

The two would meet again in the Jerome Handicap; Hill Prince would take the race by four lengths, while Middleground straggled home tenth, a broken bone in one foot causing his only career out-of-the-money finish and forcing the colt’s early retirement. With that rivalry at its end, Hill Prince would venture out of his division and face older horses next.

In the two-mile Jockey Club Gold Cup at Belmont Park, the Chenery colt took the lead four furlongs in and led the rest of the way. On the last turn, Noor, conqueror of Triple Crown winner, Citation, rallied to within a length of Hill Prince but was unable to get any closer. The older horse would get the better of Hill Prince in the Hollywood Gold Cup at Hollywood Park two months later.

On the strength of his eight wins in 15 starts, the son of Princequillo and Hildene would win Horse of the Year.

In 1951, Hill Prince returned from an injury that kept him off the track until September, winning two of his first three starts before attempting to repeat in the Jockey Club Gold Cup. The Chenery colt led throughout, with Belmont Stakes winner Counterpoint stalking. In the stretch, Hill Prince’s advantage shrank as Counterpoint mounted his bid for the lead, catching the Chenery colt at the wire to win by a head. Even with his shortened season, Hill Prince was able to win Champion Handicap Horse of 1951.

For his 1952 season, Chenery sent Hill Prince out west again, this time to Santa Anita. The five-year-old won the San Marcos Handicap in early February and then tried the famed Santa Anita Handicap a few weeks later. Hill Prince started slow, lingering at the back of the pack throughout the early part of the 1¼-mile race. By the stretch, he had moved up to seventh in the field of fifteen, and then was fifth at the wire. Jockey Eddie Arcaro, who rode Hill Prince in most of his career starts, said that the horse simply would not extend himself, but pulled up sound.

Two days later, trainer Casey Hayes found that 1950’s Horse of the Year had filling in a troublesome tendon, so Chenery retired him.

“It would have been dangerous and foolhardy to go on with him,” Hayes said upon announcing the champion’s retirement.

The Start of Something Grand

Hill Prince went to Claiborne Farm to stand alongside his sire Princequillo, who had moved to Claiborne after his first crop, which included not only Hill Prince but also Prince Simon, who was second in the Epsom Derby in 1950. His dam Hildene would go on to produce other good horses, including First Landing, sire of Riva Ridge, and Satsuma, dam of Cicada, another Meadow Stable champion.

Among his noted progeny, Hill Prince would sire Levee, winner of the Beldame Handicap and the Coaching Club American Oaks and later the dam of Shuvee, Triple Tiara champion and two-time Jockey Club Gold Cup winner; and Home by Dark, an unraced mare that would produce Dark Mirage, 1968 Triple Tiara champion.

With a record of seventeen wins in thirty starts, Hill Prince became Meadow Stable’s first champion, not only putting those now-iconic blue and white silks on the map but also bringing Princequillo into prominence as a stallion. Hill Prince entered the national racing Hall of Fame in 1991.

The history of Virginia’s Meadow Stable and Princequillo does not end there: the stallion’s daughter Somethingroyal would become another key broodmare for Chenery, foaling the great Secretariat in 1970.

This Mid-Atlantic dynasty started with something simple: a man determined to build his family home into the birthplace of great horses and an inexpensive mare named Hildene.