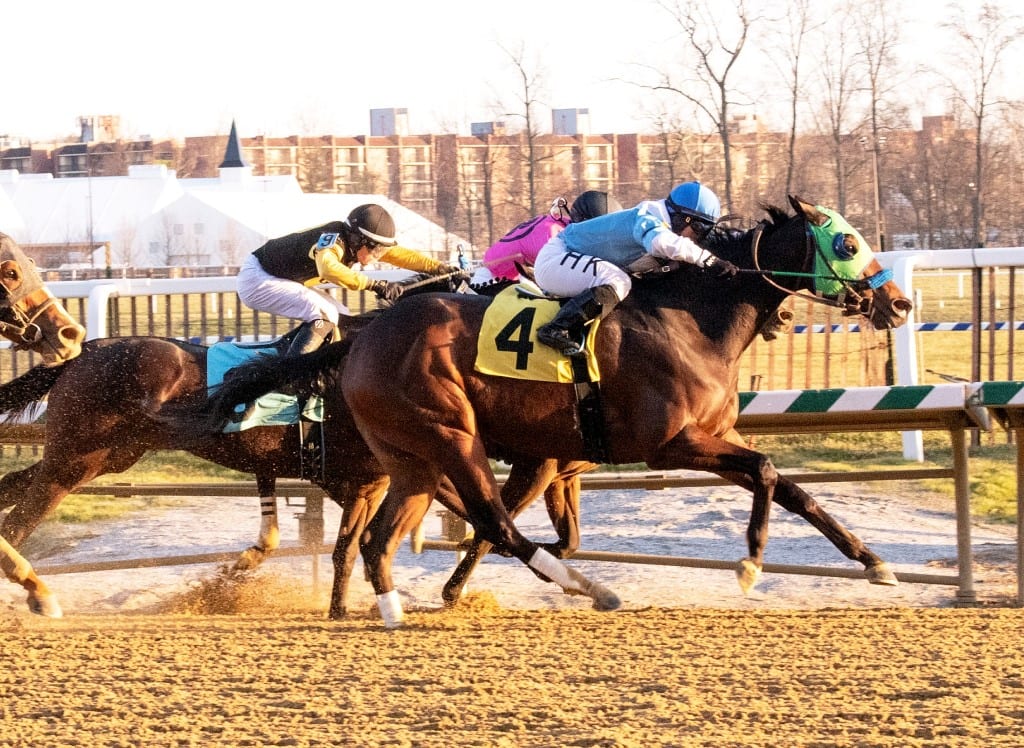 Score one — make that two — for the veterans.

Five-year-olds Lewisfield and Anna’s Bandit took a pair of Maryland-bred stakes today at Laurel Park. For the former, it was his first win since March, while the latter registered her seventh stakes win of 2019 and ninth win overall this season.

Linda Zang’s multiple stakes-winning homebred Lewisfield, wheeled back 10 days after a troubled trip at Penn National, returned to his winning ways over his favorite track with a front-running score in Saturday’s $75,000 Howard and Sondra Bender Memorial at Laurel Park.

The Bender for 3-year-olds and up and $75,000 Politely for fillies and mares 3 and older, both at six furlongs, were among four stakes restricted to Maryland-bred/sired horses worth $350,000 in purses on a nine-race Maryland Spectacular Day program.

Ridden by Horacio Karamanos for Charles Town-based trainer Jeff Runco, Lewisfield ($11) earned his eighth career win, seven of them coming in 14 tries over Laurel’s main track. It was his first victory since opening 2019 with a similar gate-to-wire triumph in the Not For Love, also against state-breds, in March at Laurel.

Lewisfield completed the distance in 1:09.97 to spoil the return of Grade 2 winner Still Having Fun, racing for the first time since May 4, and multiple stakes winner Alwaysmining, who wound up fifth in his first race since mid-July. Still Having Fun came with a furious rally up the rail to be second by a neck.

Clubman was third by a neck, and it was another neck back to 4-5 favorite Taco Supream – who beat both Lewisfield and graded-stakes winner Call Paul in the Maryland Million Sprint Oct. 19 at Laurel – in fourth.

“He definitely loves this track,” Runco said. “He always has, so it’s great to bring him back here today.”

Karamanos and Lewisfield outran turf stakes winner Oldies But Goodies, breaking from the far outside, and Alwaysmining on their inside and took the field through fractions of 22.90 and 46.23 seconds. Julian Pimentel steered Alwaysmining to the outside around the turn while Feargal Lynch stayed inside with Still Having Fun, who had settled in fourth.

The race was still wide open as the field moved past the eighth pole, with Lewisfield holding a slim lead and Still Having Fun and Clubman bearing down on the inside with Taco Supream rallying on the far outside.

“This horse had a beautiful trip all the way around. The decision was to just let him go from the gate and see if he wants the lead or get second. I tried to relax him a little bit but he tried to go and I could see [Oldies But Goodies] was not going to get there so I let him pick it up,” Karamanos said. “He took the lead really easy. He was going fast but at the top of the stretch he gave me a little kick. I waited a little bit and when I saw the pressure was coming I asked him to give me a nice kick to the end and he did it.”

Lewisfield has won four stakes, all at Laurel, and ran third in the Maryland Sprint (G3) at Pimlico Race Course in 2018 and 2019. Third in last year’s Bender, beaten 1 ½ lengths, he entered this year’s race having run sixth in the six-furlong Fabulous Strike Nov. 27.

“The horse had a tough trip up there. He got in trouble down the backside and really was out of the race right away. He didn’t get much out of it, but it didn’t hurt him any and he came out of the race great, bucking and squealing,” Runco said. “It’s hard to pass up a Maryland-bred race when the horse came out as well as he did, so we thought let’s go ahead and bounce him out of there, put him close and try to keep him out of trouble. That was our game plan and it worked out great today.”

Meanwhile, the Anna’s Bandit story continues to get better and better.

No Guts No Glory Farm’s Anna’s Bandit, trapped down on the rail at the head of the lane, slipped through a seam between horses in mid-stretch and sprinted clear to her sixth consecutive victory in the $75,000 Politely.

“She’s special because I spend a lot of time with her in the morning. She’s just like a pony,” Perez said. “We go out there and sit at the gap and then when it’s time to go train, she does her business. She’s lovely to be around. She’s just taken me on a nice journey.”

Multiple stakes winner Las Setas, making her first start since mid-May, was eager for the early lead and held it through a quarter-mile in 23.03 seconds, pressed to her outside by Grade 2-placed stakes winner Majestic Reason. Anna’s Bandit settled in third to the inside of Three Hawk and Phantom Shot, who launched her bid for the front after a half in 46.31.

Perez stayed patient as Phantom Shot took over the top spot from Las Setas once straightened for home, and Anna’s Bandit was able to split those two inside the eighth pole before drawing away as Perez emphatically pointed to his mare approaching the wire.

It was a length back to Majestic Reason in second, followed by Three Hawk, Phantom Shot and Las Setas. Limited View was scratched.

“I knew I was going to be fine when she finally got running and got the room to go,” Perez said. “I got a little [worried] around the three-eighths pole [when] I got boxed in … but I saw [Three Hawk] moving on the outside and that gave me the room to get in a rhythm again and get going.”