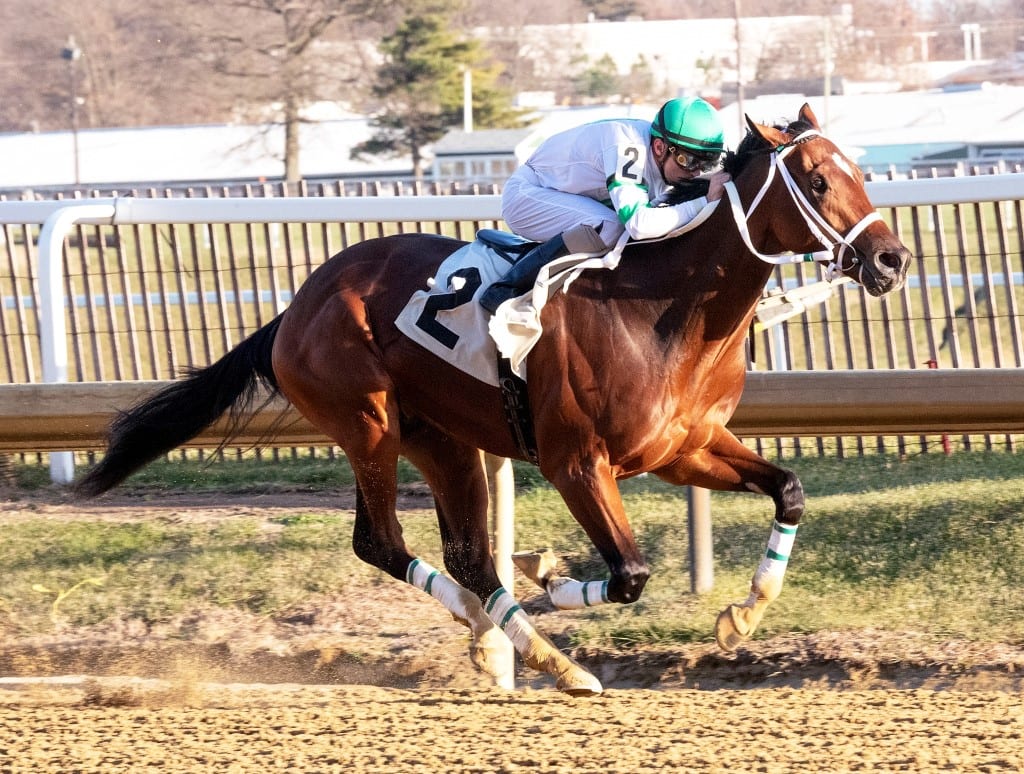 A pair of two-year-old races contested consecutively on the latter portion of the Saturdya’s Laurel Park card offered a potential glimpse of the local future. And oddly enough, both winners share a pair of human bonds.

In the $100,000 Maryland Juvenile Filly Championship, Hello Beautiful (Sheldon Russell) dazzled when she romped home nearly 12 lengths clear in a blazing 1:22.43 for seven furlongs as the 3-2 favorite. Freshened since her four-length tally in the Maryland Million Lassie, Hello Beautiful easily recorded her second straight stakes triumph and now owns three wins and over $165,000 banked from six career outings.

“It definitely helped that we had the outside post,” said jockey Sheldon Russell after piloting home the daughter of Golden Lad for trainer and wife Brittany Russell. “She made the lead really easily, and she was going along very easily. I thought Miss J McKay would make a run at us on the far turn, but my filly was going along so easily. When we straightened away, I took a peek at the screen in the infield and saw that my filly was well clear. I didn’t think we were going that fast since she was doing it so easily.”

Hello Beautiful, a bargain $6,500 yearling purchase one year ago for Brittany Russell and Dark Horse Racing LLC, won at third asking and subsequently was sold to an ownership group headed by Madaket Stables.

Since the sale, she’s won two of three starts with a runner-up efforts. And she has her trainer thinking about the future. Hello Beautiful will get a brief freshening before making her sophomore debut in an unspecified spot.

“There was a little pressure on me today,” Brittany Russell said. “She had been off six weeks and there’s always pressure on you to win races. She came into this race perfect. She ran her best race so far. I think she’s going to get a little time off now and then we’ll hope to bring her back next year for her three-year-old season. I really don’t have anything definite in mind. We’ll let us tell her when she’s ready to come back.”

One race later in the $100,000 Maryland Juvenile Futurity for two-year-olds, Laddie Liam gave ’em the slip, and gave jockey Sheldon Russell his second straight stakes win and third winner on the card. The freshman son of Golden Lad led throughout as the 2-1 third choice to score in 1:23.51, a clocking one full second slower than the one Hello Beautiful posted in the Filly Championship.

“My plan initially was not to go to the front, but he broke so sharp I just left him get the lead,” Russell said. “He was really doing it pretty much on his own through the first half-mile. I heard those other horses moving up outside us on the far turn, but I still felt like I had a lot of horse underneath me. I got after him a little bit in the lane and he really dug in for me. I really wasn’t that worried – Hugh had him ready for his best effort today.”

Off as the third choice, Laddie Liam returned $6.60 to win and was 4 1/2 lengths clear of runner-up Stone Courageous, with Tommy Shelby third. Favored Raging Whiskey finished sixth and last.

Both Hello Beautiful and Laddie Liam by hot young sire Golden Lad, and both were bred by Ellen Charles’ Hillwood Stables. While Hello Beautiful had won smartly on Maryland Million Day — and then exceeded that performance on Saturday in the Maryland Juvenile Filly Championship — Laddie Liam has now won twice since running third in the Maryland Million Nursery.

Trainer Jeremiah O’Dwyer may have been disappointed to see tepid 2-1 favorite Raging Whiskey (Feargal Lynch) finish sixth, beaten 20 lengths in the Maryland Juvenile Futurity, but another of his runners, Shotski, certainly took the sting out of that defeat. Shotski (Luis Saez) zipped to an 8-1 upset in the Grade II, $250,000 Remsen Stakes at Aqueduct Race Course in New York on Saturday.

A juvenile son of Blame out of the Bluegrass Cat mare She Cat, Shotski rebounded from a fourth-place finish in the $125,000 Street Sense Stakes at Churchill Downs in late October to notch his second win in four starts and pushed his earnings toward $180,000. Shotski had finished 10th in his career debut on the turf at Kentucky Downs in September and then came back to defeat maiden special weight foes at Laurel Park by four lengths in early October. On Saturday he outlasted the late surge from Ajaweed to capture the Remsen by a half-length in 1:54.24 for his first graded stakes score.

The Remsen provides 10 Kentucky Derby points to the winner.