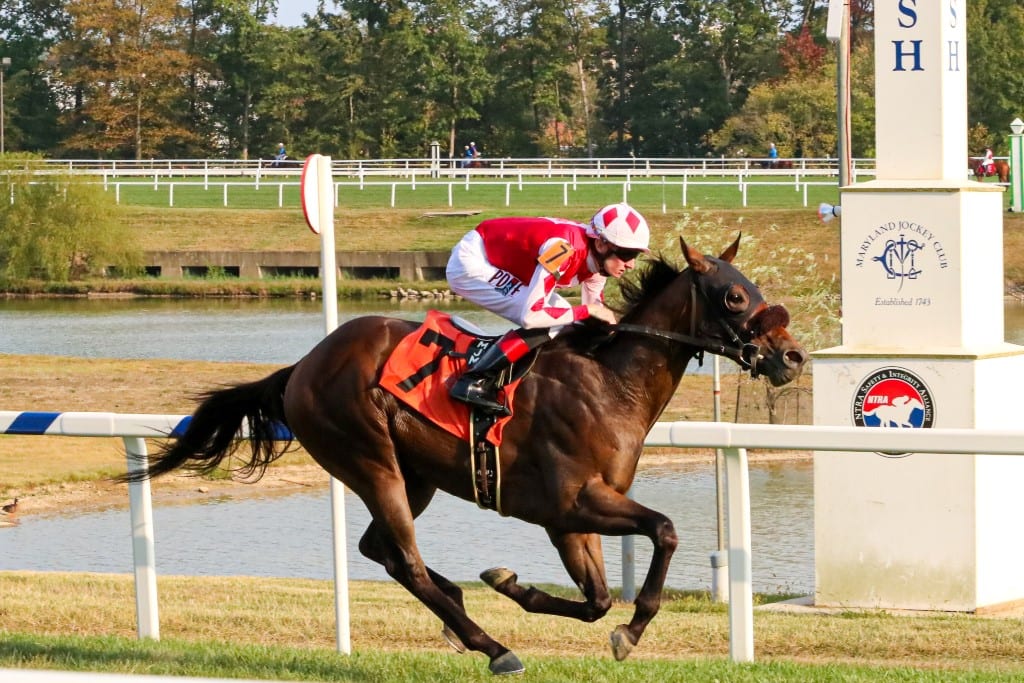 A pair of juvenile races on the Laurel Park turf Saturday proved to be formful and could foretell the near future. With Jim McKay Maryland Million Day looming three weeks from now, both freshman winners, who scored at odds-on in their respective events, look to be strong Million contenders.

In the $100,000 Anne Arundel County Stakes for two-year-old fillies on the lawn, Miss J McKay, named for the late Maryland Million founder, easily lived up to her role as the 4-5 favorite under Trevor McCarthy when she split horses on the far turn, swept to command at the head of the lane and drew clear in the lane to a five-length score while getting the 5 1/2-furlongs in 1:02.49 over the firm course.

It was the first stakes win for Miss J McKay’s sire, Hangover Kid. Trained by Cathal Lynch for Maxis Stable, Madaket Stable, and Wonder Stable, Miss J McKay has actually crossed the wire first in all three of her career outings – she was disqualified from first and placed third for impeding a foe in the $70,000 Colleen Stakes at Monmouth Park last month – and will likely next head to the Maryland Million Lassie for two-year-old fillies on the main track here on Oct. 19. She had captured her debut against maiden $40,000 claimers going 5 1/2-furlongs on the dirt at Laurel.

“She’s always trained really well on the dirt, so the Maryland Million is the logical next step since she’s named for Mr. McKay,” Lynch said. “I thought she would do well on the turf, so we tried her in the Colleen at Monmouth and she ran well. She was just green that day and lugged in and bumped a few rivals inside of her. But she was much better today. After the Maryland Million, I’ll talk to the owners and see if they want to try her going long.”

McCarthy had steered Miss J McKay to an easy victory in her career debut over the Laurel main track, but was not aboard her when she got disqualified from first and placed third in the Colleen. He climbed aboard her on Saturday and steered the Hangover Kid filly to an emphatic score in the Anne Arundel, his second of three straight stakes scores on the day.

“We had to wait a few minutes in the gate before they turned us loose, but that happens,” McCarthy said. “She was ready to run today. She really pulled me up alongside those horses on the far turn. She finished really well and I never really had to get after her. She really showed her class today.”

Nearly three hours later in the last stakes race on the program, McCarthy once again prevailed with the favorite in a juvenile sprint when he steered So Street to a three-length score as the 4-5 choice in the $100,000 Howard County for two-year-olds on the lawn.

The freshman son of Street Magician trained by Jamie Ness notched his third win in five starts by getting the 5 1/2-furlongs in 1:03.55 – a full second slower than Miss J McKay’s final clocking in the Anne Arundel – and will be pointing for the Maryland Million Nursery for two-year-olds on the main track.

“He really looked like he could handle this group, on paper,” said Ness, who had earlier teamed up with McCarthy to capture the $75,000 Shine Again with Our Super Freak. “He came out of a really tough race at Colonial Downs. I think the one that won it [Four Wheel Drive] is going to the Breeders Cup. My colt ran well today. He’s definitely coming back here for the Maryland Million. He won first time out on dirt, so I think he’ll do well in there. He might end up being better on the turf.”

McCarthy had been aboard both juvenile winners and did not give much thought to the one second difference in their final clockings for the same distance over the course. Much like Miss J McKay earlier, McCarthy had also been aboard So Street when he scored at first asking against maiden $35,000 claimers on the main track at Pimlico in early May.

“I thought this colt was going to sit just off of them down the backside,” McCarthy said. “But he was really sharp down the backside and just pulled me to the front. I thought both this colt and that filly earlier ran really well. I was happy with both of them. So Street has a lot of ability and that filly is really nice. They both won stakes over the same course on the same day. I was just happy to be aboard both of them today.”