Of sales and stakes: The week in social media 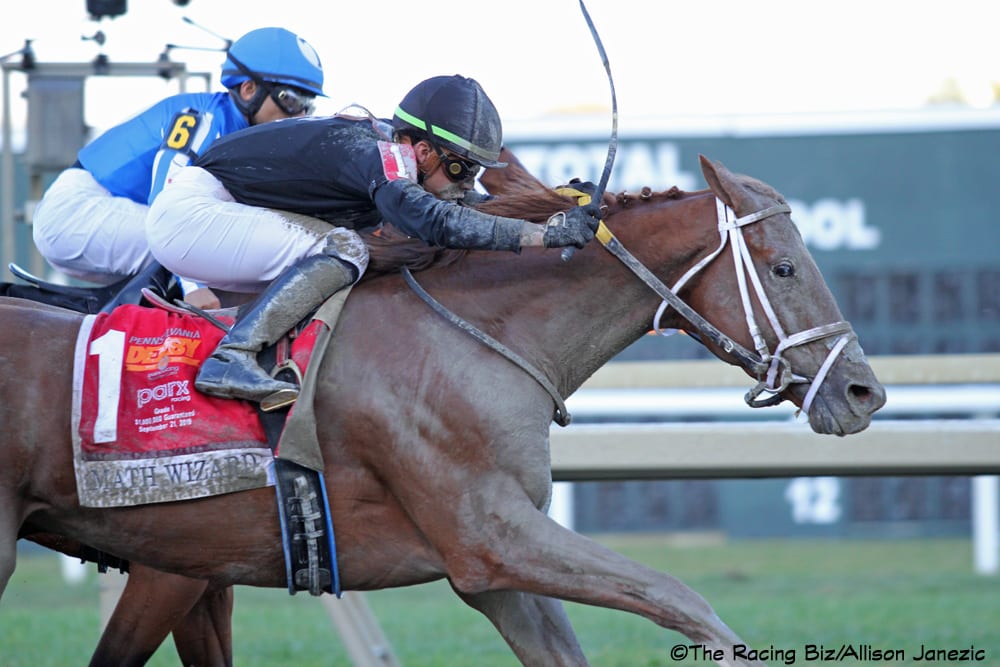 Math Wizard was along in time to upset the Grade 1, $1 million Pennsylvania Derby. Photo by Allison Janezic.

A Maryland sire was represented by his first stakes winner, the Fasig-Tipton Midlantic Fall Yearling Sale is almost here, and the Pennsylvania Derby (G1) concluded with a major upset.

Here is what the racing world in the Mid-Atlantic region has been buzzing about this week on social media:

Anchor & Hope Farm’s stallion Bourbon Courage was represented by his first black-type winner over the weekend, when his son Raging Whisky stormed his way to glory in the Capote Stakes at Los Alamitos Racecourse.

Trained by Doug O’Neill and ridden by Rafael Bejarano, Raging Whisky broke sharply from the gate in the 6 ½-furlong dash and led the way. After setting fractions of :21.55 and :44.56 through the half mile, the two-year-old colt took powerful command in the stretch to score by eight convincing lengths. The race was completed in a final time of 1:15.61 over a track rated as fast.

Bred in Maryland by Finn’s Nickle and Anchor & Hope Farm, Raging Whisky is owned by Pappas Horse Racing and Charles Barlett. The colt now has a current record of two wins from six starts, and earnings of $107, 576.

The Fasig-Tipton Midlantic Fall Yearlings Sale is just days away.

Some 435 thoroughbreds have been entered in this year’s edition of the sale, with several of the entries representing our region as horses bred in the Mid-Atlantic, which qualifies them for enticing state-bred programs.

The sale is set to commence on September 30, at 4 p.m. EST in Timonium, MD. Day one of the sale will span from Hip 1 through Hip 150. The second day of the sale will begin on October 1, at 10 a.m. EDT and will conclude once the final horse has made its way through the ring.

Throughout the years the Midlantic Fall Yearling Sale has had countless high-quality thoroughbreds pass through the ring, such as Eclipse Award winner and multiple graded stakes winner, Stellar Wind, as well as Grade 1 winners Army Mule and Long on Value, to name a few. As a sale that has witnessed such an abundance of successful horses pas through its ring en route to becoming famous, it’s hard to ignore the possibility that racing’s next superstar could be lurking in this year’s edition of the sale.

Math Wizard pulled a massive upset in the Pennsylvania Derby (G1) on Saturday.

Dismissed and sent to post at odds of 31-1, there weren’t many people at Parx Racing that would have given former claimer Math Wizard much of a prayer to win the $1 million Pennsylvania Derby (G1). However, the copper son of Algorithms didn’t know the odds were against him, and the way he ran his race proved it.

With Irad Ortiz Jr. in the saddle, Math Wizard came flying late from out of the clouds in the stretch of the Pennsylvania Derby. The sluggish early pace of the race suggested that the closers would be at a disadvantage in the 1 1/8-mile test, but Math Wizard proved more than capable of handling the challenge. With a tremendous turn of foot, the longshot closed in on his rivals and earned victory by a neck over the 8-5 second choice, Mr. Money, stopping the clock in a final time of 1:50 4/5 over the fast-main track. Math Wizard earned an automatic entry into the Breeders’ Cup Classic (G1) by virtue of his victory in the “Win and You’re in” event.

Math Wizard has a current record of three wins from thirteen starts and earnings of $860,623.