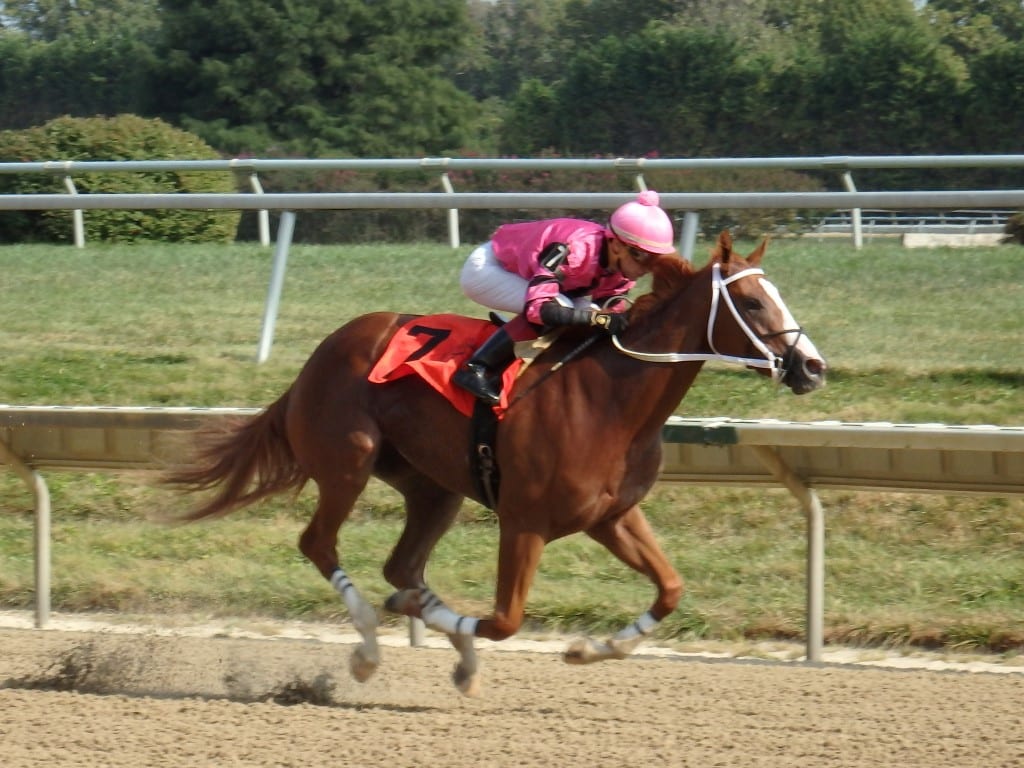 Pink Caddy was much the best in the $100,000 Small Wonder Stakes at Delaware Park. Photo by The Racing Biz.

When Call Paul went through the sales ring in May 2018, trainer Randy Allen was the underbidder.

That was a mistake he did not repeat four months later, when Call Paul’s little half-sis was offered in the Fasig-Tipton Midlantic Fall Yearling sale last October. His client, Greg Quick, made the winning $40,000 bid for the daughter of El Padrino-Avani Force, by Forestry.

That filly, now named Pink Caddy, earned the second win of her four-race career in Saturday’s $100,000 Small Wonder Stakes for Delaware-certified two-year-old fillies, and she did it in a way that suggests there’s plenty more to come.

“Listen, I thought she had the most talent in the race,” Allen said afterwards. “But this is horse racing. Anything can happen, and they’re also 2-year-olds, and she’s never raced at this racetrack. So there were a lot of variables to go through.”

Maybe so, but she went through them like a good horse. Like, say, big brother Call Paul, a multiple graded stakes winner of more than $500,000, would have.

Like, in fact, Call Paul did. Two races after Pink Caddy cruised home in the New Castle, Call Paul, trained by Jason Servis, did the same in the $100,000 New Kent, winning by three lengths in 1:09.38 for six furlongs over a fast main track.

In the Small Wonder, Pink Caddy made her second stakes start, her first having been a fifth-place finish in Monmouth Park’s grassy Colleen Stakes.

Under jockey Mychel Sanchez, Pink Caddy settled in fourth early while never far off the pace. She was just a half-length behind in second as the field neared the quarter-pole, and from there, it was just a matter of time.

“I told him don’t get in a hurry,” Allen said. “I think if you’re within in a length or two when they turn for home, I think you’re in a good spot, and that’s exactly how it fell out.”

She also has the look of a horse who might take her owners places, but Allen says he’s not in a hurry with her. They’ll point her to the $100,000 Blue Mountain Juvenile Fillies for Pennsylvania-breds at Penn National for her next start and then take it from there.

“I’m not trying to beat nobody,” Allen said with a laugh. “When you get to a certain point, then you have to go find somebody. But i’m trying to keep it and let her graduate and mature on her own.”