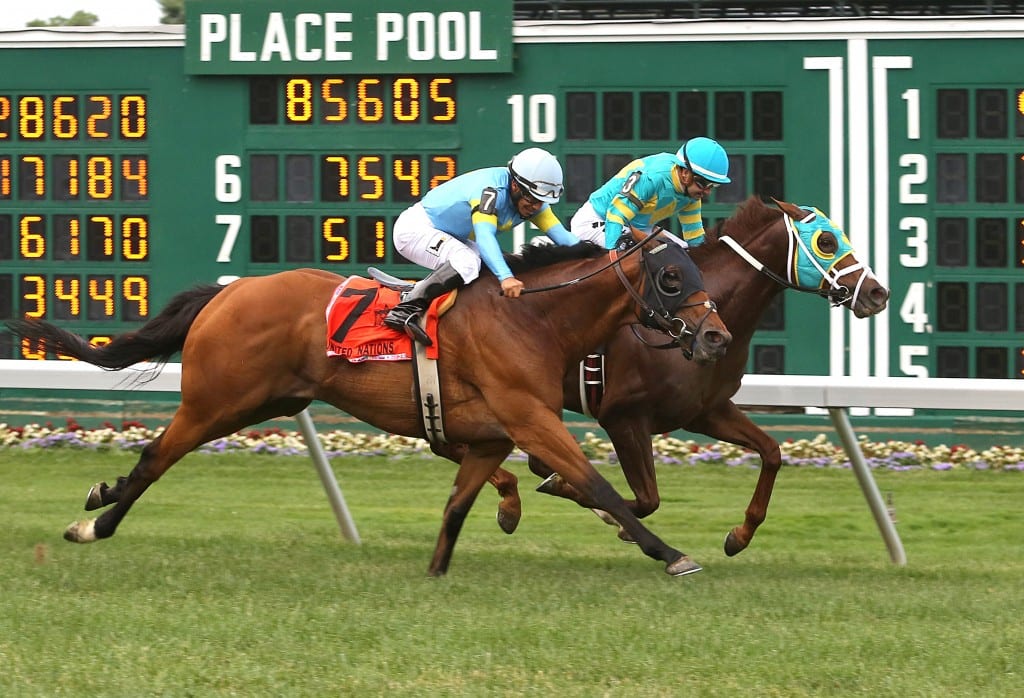 Bigger Picture slipped through inside to win the 2017 G1 United Nations Stakes over Can’thelpbelieving. Photo By Taylor Ejdys/EQUI-PHOTO.

Trainer Michael Maker knows the time is drawing near when Bigger Picture won’t be able to continue to be competitive in graded stakes company but until that happens he’s going to keep sending out the 8-year-old gelding with the expectation he will add to his impressive career credentials.

“I hope he continues racing at this level a little longer, but when the time comes that he is not on the top of his game and can’t do it he will be missed dearly,” Maker said.

Bigger Picture, who won the United Nations Stakes in 2017 and was third in last year’s edition, heads the field for Saturday’s 66th running of the Grade 1 United Nations at Monmouth Park – one of four stakes races on the 13-race card.

Maker will be represented by two of the eight starters in the field for the $300,000 feature race at a mile and three-eighths on the grass. Zulu Alpha, who has won seven of 21 career turf starts, will join stable mate Bigger Picture in the starting gate for the United Nations.

“Both of my horses have been doing well,” Maker said. “They’ve been keeping solid company all year so I expect them to show up like they always do.”

Bigger Picture, a winner of more than $1.6 million from 40 career starts (13 wins), comes in off a victory in the Grade 2 Elkhorn Stakes at Keeneland on April 20 and has two wins in three starts this year.

Saturday will mark his fourth straight appearance in the United Nations.

“He’s exceeded all of my expectations,” said Maker. “It’s hard to believe this is his fourth straight year in this race.”

Joe Bravo, whose rail-skimming trip helped Bigger Picture win the United Nations in 2017, again has the mount. Zulu Alpha, with two graded stakes victories this year, is scheduled to be ridden by Channing Hill.

If the persistent week-long rain causes the turf course to be yielding or soft, Maker is fine with that for both of his runners. Bigger Picture won the Elkhorn on a yielding grass course. Zulu Alpha won the Grade 3 W.L. McKnight Stakes at Gulfstream on Jan. 26 over a yielding course.

“They can both handle a soft or yielding turf course,” he said. “I’d prefer it to be firm even though they have run well on a yielding turf.”

Trainer Chad Brown, who had four starters in last year’s United Nations and won the race with 23-1 shot Funtastic, has two starters in the field in Arrocha and Focus Group.

The United Nations will go as the 11th race on the card.