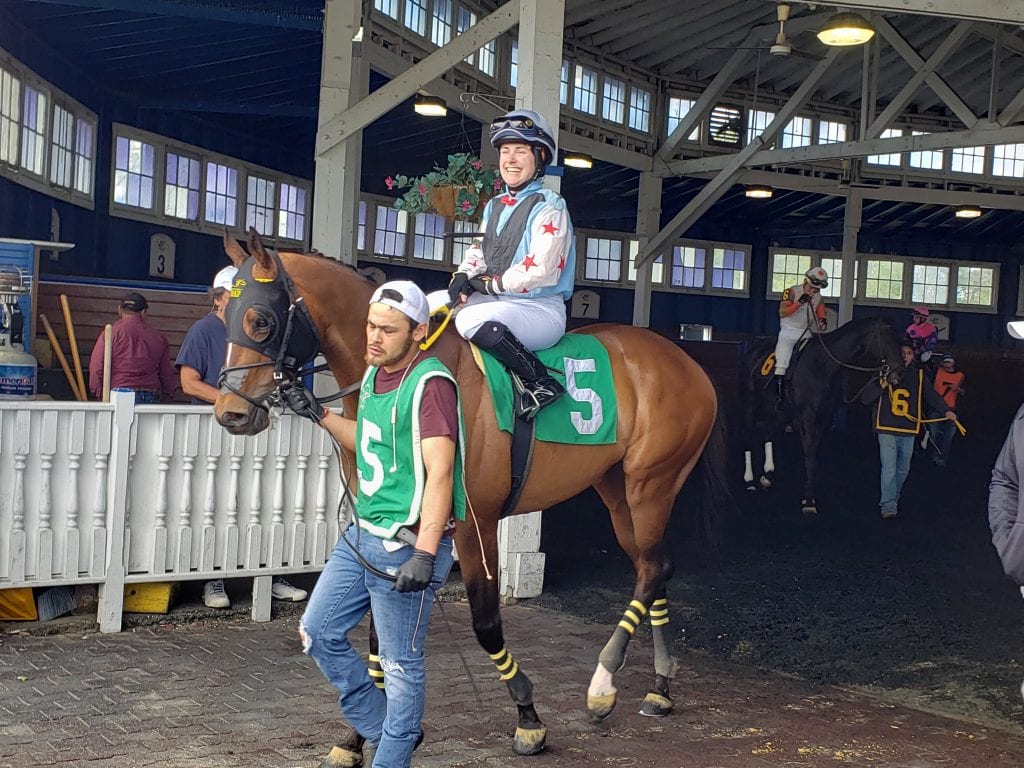 Jenn Miller and Moneymeister in a race in April at Laurel Park. Photo by The Racing Biz.

River Card Stable’s Moneymeister swept to the lead on the far outside entering the stretch and drew off through the lane to give five-pound apprentice Jenn Miller the second win of her comeback and first in Maryland in 18 months Friday at Pimlico Race Course.

A 5-year-old Bodemeister gelding trained by Wayne Potts, Moneymeister ($4) ran six furlongs in 1:11.85 over a fast main track as the even-money favorite in a field of six to take the $15,000 claiming event for 3-year-olds and up by 2 ¾ lengths.

Miller, 33, exercises horses in the mornings for Laurel Park-based Potts, earning her first Maryland victory since Sippin’onbubbles Nov. 18, 2017. Exactly one week later, she suffered a traumatic brain injury and broken jaw in a spill at Charles Town and was unable to get back on horses for a year.

“I feel incredible. I’m on cloud nine. That was wonderful,” Miller said. “The other really cool thing was that horse was my first mount back, and this is the first time he’s run since then. I’m so proud of him. He did a great job, and the crew did a great job getting him ready and taking care of him.”

Miller and Moneymeister finished second April 22 at Laurel in the rider’s first race since being injured. The Wales, Mass. native rode Potts-trained Prank Call to victory at Suffolk Downs in Boston May 18 – Preakness (G1) Day at Pimlico.

Following the spill, Miller underwent surgery for her injuries and was admitted to MedStar National Rehabilitation Hospital in Washington, D.C. for occupational therapy, continuing her recovery at home. A Go Fund Me campaign started on her behalf with a goal of $10,000 raised $27,595 toward expenses.

A strong work ethic and passion to return to race riding guided Miller, a former Grand Prix dressage rider, in her comeback from multiple seizures, memory loss and issues with balance, concentration and focus.

Miller has two wins, five seconds and two thirds in 17 mounts during her comeback. She was thrilled to get her first win in Maryland.

“That is huge,” she said. “I grew up in Massachusetts, but Maryland is home now.”