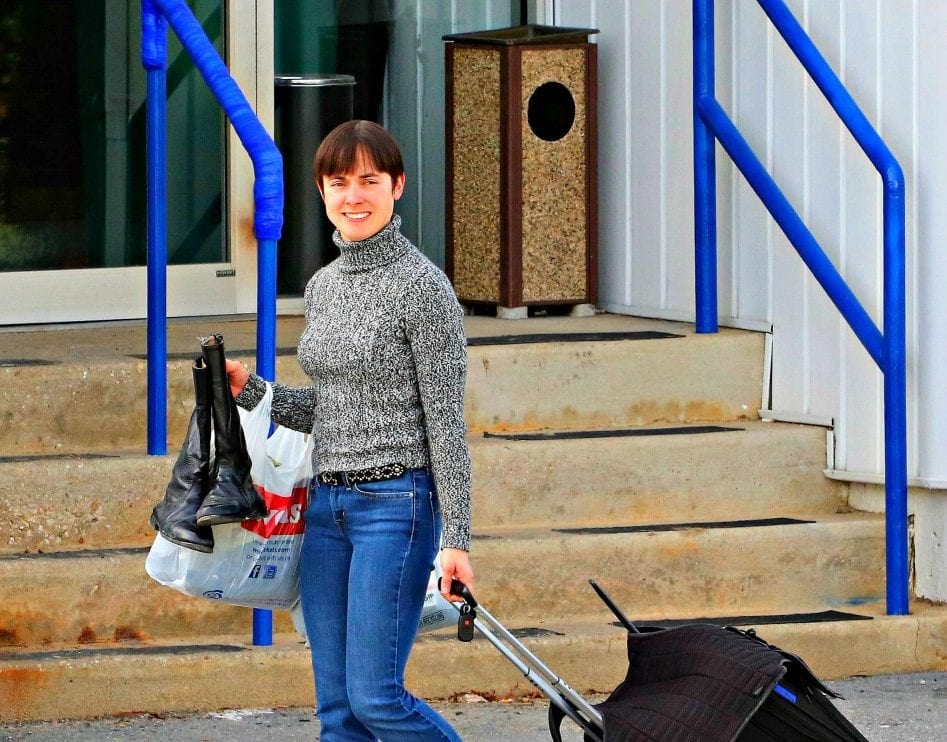 Jenn Miller after another day at the office. Photo by Dottie Miller.

The support injured jockey Jenn Miller has received from the racing community has been incredible, her mother says.

“They stick together, and they help their own,” Barbara Mackintosh observed. “I’m amazed by the support she’s received.”

But, she cautioned, “Jenn’s going to be out of work for quite a while.”

That support will continue to be critical for months to come, as the apprentice rider works to regain her health, her strength, and her livelihood.

Miller, 32 and a five-pound apprentice racing primarily in the Mid-Atlantic, was injured this past Saturday in the second race at Charles Town. Her mount, Green Time, crossed the wire in fifth place after leading much of the way in the starter allowance test but just after doing so, the four-year-old Fiber Sonde gelding broke down.

Miller was flung from the horse’s back into the middle of the track, where she was kicked by an oncoming horse. She suffered bleeding on the brain in two places and a severe concussion. She also broke her lower jawbone in two places.

Green Time was euthanized after shattering his left front cannon bone, trainer Wayne Potts said. Now, he said, the focus needs to be on helping Miller heal. To that end, the barn’s Chris Ho has set up a Gofundme page which to date has raised more than $21,000.

Miller has had surgery to repair the broken mandible. In one of the spots, the bleeding on the brain has dissipated; the other spot has not yet done so, but it has not grown larger, Mackintosh said.

Miller has been moved from the intensive care unit to a private room. She has walked for the first time, albeit with assistance. But she continues to sleep a great deal and is sometimes disoriented when she wakes up. Mackintosh said the family is looking for a facility able to provide neurological rehabilitation when Miller leaves the Winchester hospital.

It’s a difficult blow for a rider who has of late been making inroads, often riding for Pott’s Laurel Park-based barn. Potts said that Miller typically gets on eight to 10 horses in the morning for him, and she’d become one of his go-to riders in the afternoon. Among her mounts for him has been the two-year-old Double Naught Spy, who is two-for-two.

Miller began riding in dressage competitions in college, at the University of Massachusetts, where she also earned degrees in equine management and psychology.

She began shifting to race-riding through the efforts of trainer David Nunn, who asked her to gallop some horses for him in Florida.

“I knew she could ride from the day I met her,” Nunn said. “No fear in that girl.”

She moved on to gallop horses for trainer Joe Sharp and then made her racing debut in 2015. She won her first race, for Nunn, aboard Exclusive Symphony at Parx Racing last December. This year she has won with 51 of 419 starters, generating purse earnings of over $1 million.

But her love of horses goes back even farther, said her mother, who lives in Wales, MA but is now spending her days at her daughter’s bedside.

“I knew when she was 10 years old that she had an incurable disease called ‘horse fever,’” Mackintosh said.

Perhaps partially as a result, though occasional injuries are an unavoidable byproduct of a life around horses – Mackintosh herself sustained injuries from a fall a few years back – she said she was happy with her daughter’s pursuits.

“My philosophy with my children is, as long as they’re happy doing what makes them happy, then I’m happy for them,” she explained.

But between where she is now and getting back to doing what makes her happy, a long road, and lots of work, lie before Jenn Miller.

Nunn, for one, is betting on her.