Codex, Genuine Risk, and the Preakness DQ that wasn’t 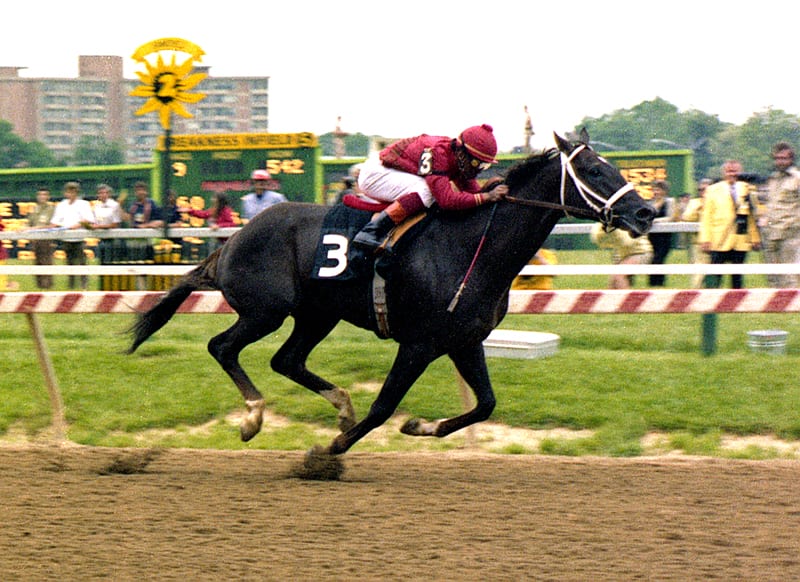 Codex was by himself at the end — but not at the top of the stretch. Photo Maryland Jockey Club.

As Alan Foreman sat watching the aftermath of the Kentucky Derby last Saturday afternoon, he had a Yogi Berra moment.

“It was déjà vu all over again,” he said by phone this week.

In 1980, Foreman was the state attorney representing the Maryland Racing Commission in Bertram and Diana Firestone’s appeal of the stewards’ decision in that year’s Preakness, in which they maintained that Codex, ridden by Angel Cordero to a nearly-five-length victory, had interfered with their filly Genuine Risk at the top of the lane, preventing her from winning and taking a shot at the Triple Crown.

The stewards saw it differently that day at Pimlico Race Course, May 17, 39 years ago, ruling that Codex had not impeded the filly that had won the Kentucky Derby.

The story is arguably that of Thoroughbred racing’s most notorious non-DQ, involving a history-making family, one of the country’s top riders, and bluebloods on both sides.

Codex was bred and owned by William McKnight’s Tartan Farm; he was trained by D. Wayne Lukas, who entered racing’s Hall of Fame in 1999.

LeRoy Jolley, a 1987 Hall of Fame entrant,  trained the filly that had captured popular attention by becoming the first filly to win the Kentucky Derby since 1915.

“It was a different world then,” said Foreman. “Our camera technology that day was primitive by today’s acuity standards. There was no social media. The only cameras we had were on the track, pan shots in certain places and the head-on. The public could see the incident from only one angle, the rooftop camera near the finish line.”

As he was last weekend, Foreman was watching the 1980 race from home; a Preakness party the night before had him left with a case of food poisoning.

Seven years after Billie Jean King had defeated Bobby Riggs in the “Battle of the Sexes,” Genuine Risk became something of an equine symbol for athletic equality. Heading into the Preakness, she’d lost only once in eight races, a third-place finish in the Wood Memorial in April of that year, a career that had the general public wondering: Can a filly win the Triple Crown?

“The whole country tuned in [to the Preakness] to see if she would win,” said Foreman.

She didn’t, beaten soundly by Codex. But her fans’ hope was renewed when her jockey, Jacinto Vasquez, claimed foul, alleging that Cordero had struck the filly with his whip and bumped her as she approached coming around the final turn to threaten his lead.

“You had Billy Hartack, a Hall of Fame rider, on the ABC broadcast saying it was a foul,” recalled Foreman. “That shaped the minds of the viewers, who were stunned when there was no disqualification. When [steward J. Fred Colwill] said the stewards hadn’t seen a bump, they must have thought that he’d been downstairs eating a ham sandwich.”

Foreman said that the stewards at Pimlico—Colwill, Clinton Pitts Jr., and Edward Litzenberger—had access to neither the ABC broadcast of the race nor the commentary. One of them had watched the track feed of the race live in the stewards’ room, the other two outside on a porch high above the track with binoculars.

When the decision was announced after about 10 minutes of deliberating, Foreman said to himself, “This is not going to be good.”

Five minutes later he got a call to get to the track.

The Firestones and Leroy Jolley, Genuine Risk’s trainer, wanted to see the video of the race. They met the stewards and Foreman at the ABC TV truck, and after the stewards explained their reasoning to the Firestones, Foreman met with the media — and took questions, unlike the stewards at Churchill Downs.

One contested similarity between the two events is that in neither case did the stewards put up an inquiry sign, waiting instead for a jockey objection.

“We goofed,” admitted steward Litzenberger to the Washington Post in an article published three days after the race. “In the heat of the action all three of us knew there would be a beef. We watched the reruns and didn’t flash the inquiry sign. If you realy (sic) examine the whole situation, that might be the only area in which we were remiss.”

“A Lady Mugged,” ran one headline in the Washington Post.

“We got telegrams,” said Foreman. “People were outraged.”

The telegram was also the medium of choice for the Firestones to inform the Maryland Racing Commission of their decision to appeal the stewards’ ruling.

As the attorney representing the Commission, Foreman pored over the ABC film, enlisting the aid of the video expert employed by the Capital Centre in nearby Landover, then home of the Washington Capitals and Bullets. Thoroughbred owner Arnold Siegel was employed as “special consultant” by the arena, and he was credited with making the Cap Centre a “test bed for new technology” in a 2017 Washington Post article.

The slowed-down, blown-up video showed no evidence of the alleged foul, but, Foreman conceded, it was so distorted that it was difficult to trust.

When the Firestones’ lawyer Harry Lord informed Foreman that he was intending to use still photos from the Baltimore Sun, he noticed the name of the photographer imprinted on the back of them and wondered, “What else has he got?”

Foreman employed another old-school technology, a phone book, to contact the photographer, Weyman Swagger, who turned over film of previously-unseen photos to the Commission.

“We developed those photos,” said Foreman, “and we got a frame-by-frame, spot-by-spot view of the horses coming around the turn. Comparing them to the ABC frames was night and day.”

While social media this week has at times launched vitriol at a photographer standing inside the turn, blaming him for Maximum Security’s behavior, in the case of the 1980 Preakness, it was a photographer who provided the definitive evidence of a contested call. Swagger’s photos, which were mentioned in his 2010 Baltimore Sun obituary, were unceremoniously dismissed by Genuine Risk’s rider.

“I don’t give a damn about the photographer,” Vasquez said during the hearing. “I just know what I claim foul. I just know Cordero come out and carry me wide.”

“The horses had daylight between them,” said Foreman. “There was no bump, there was no whip. Codex did drift out and took her momentum away. But did that prevent her from winning?”

In the view of the stewards the answer was no, a decision the Commission affirmed and by which Foreman still stands.

Pointing out that Thoroughbred racing pioneered the video replay system to determine fouls on the field of the play, Foreman said that the Codex case also revealed the system’s flaws and acknowledged how far on-track technology has come since then.

“You could never get away with what they did back then,” he said.

Still, he expects the 2019 Kentucky Derby to join the 1980 Preakness in the annals of disputed calls, even as he maintains that in both cases, the stewards acted correctly to the rules.

“You don’t want to rob the bettor,” he said, “but the reason for the rule is the safety of the horse and the rider.”