Northam: New Colonial Downs to “put a lot of people to work” 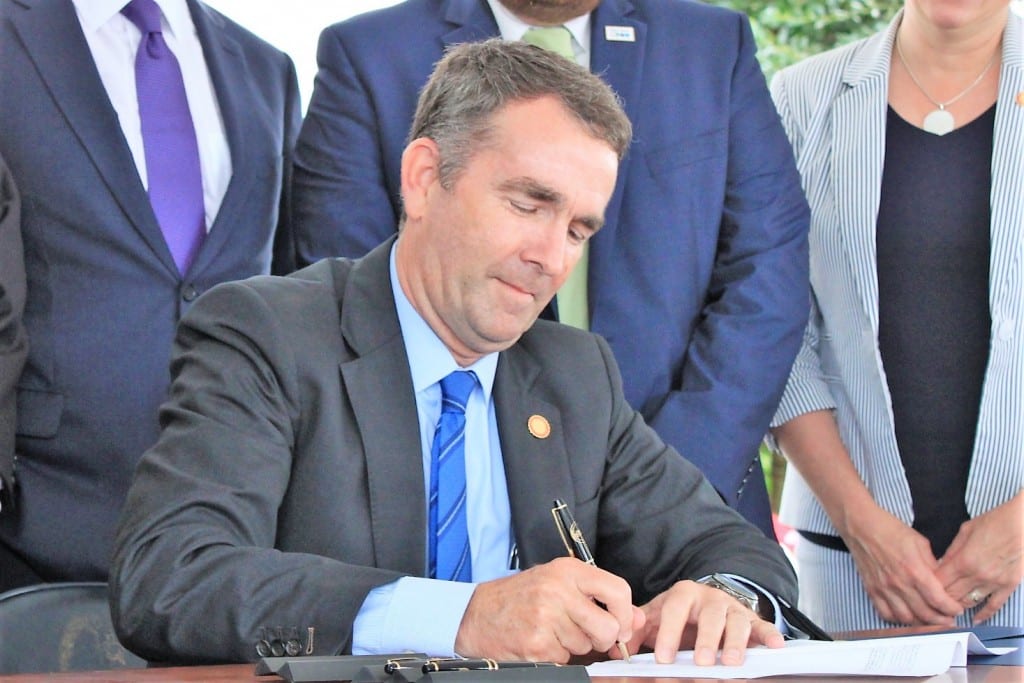 On the eve of kickoff party reintroducing live horse racing to Virginia, an epic deluge flooded the New Kent County region. When the rain gauge at nearby Richmond International Airport finally settled at 7.39 inches — a rainfall that temporarily closed its runways — Colonial’s turf course still appeared capable of hosting the late double. It’s been known to happen.

Whether because of the steadily soaking rains or the turf burn six weeks ago, the grass did appear a little greener this summer at Colonial Downs to the enthusiastic crowd on hand for Governor Ralph Northam’s ceremonial bill signing on June 22. The event, held on the front lawn, was the Governor’s first visit to Colonial Downs.

After comments, Northam signed the bill to allow historical horse racing machines in Virginia, though regulations are still being prepared for Virginia Racing Commission approval. The bill’s passage enabled the sale of track to its new owner now known as The Colonial Downs Group. It’s widely expected that thoroughbred racing will return to Colonial Downs in the second half of 2019.

“Horse breeding is alive and well. We just want horse racing to be part of the Commonwealth,” Northam told ESPN Richmond on “Hardly Workin with Greg Burton,” who was on-site hosting a radio show Friday afternoon. “It’s going to put a lot of people to work here.”

Brent Stevens, on the board of directors of the newly formed Colonial Downs Group, believes the track re-opening will lead to 1,400 jobs.

“We see our future as full partners with the horse racing industry here in the Commonwealth of Virginia, with the Commonwealth itself, all the business leaders, all the local community leaders here in New Kent County and other localities where we will have a presence in Virginia,” said Stevens.

For many, the gathering was the first opportunity to hear from the new chairman of Colonial Downs, Larry Lucas, whose comments were short and sweet.

Lucas acknowledged “the support we’ve had from New Kent County,” as well as the Virginia Racing Commission.

Speakers from included State Senator Tommy Norment and Delegates Michael Webert and Chris Peace of Virginia’s General Assembly, as well as Thomas Evelyn, chairman of the New Kent County Board of Supervisors, all conveying optimism of the track’s path to reopening.

A bugler opened the ceremony when he horned several bars of “Charge” before leading into “The Call to the Post.” Covert Action, a retired thoroughbred and grandson of Secretariat, was one of several equines brought in as part of the hospitality that attracted racing leaders, neighbors, fans, horsemen and public officials. Many attendees coming back for the event participated in the grand opening of the track in 1997. Colonial Downs hosted an annual meet each year until 2013 when an ownership dispute with horsemen led to an impasse and ultimately to the track’s closure.