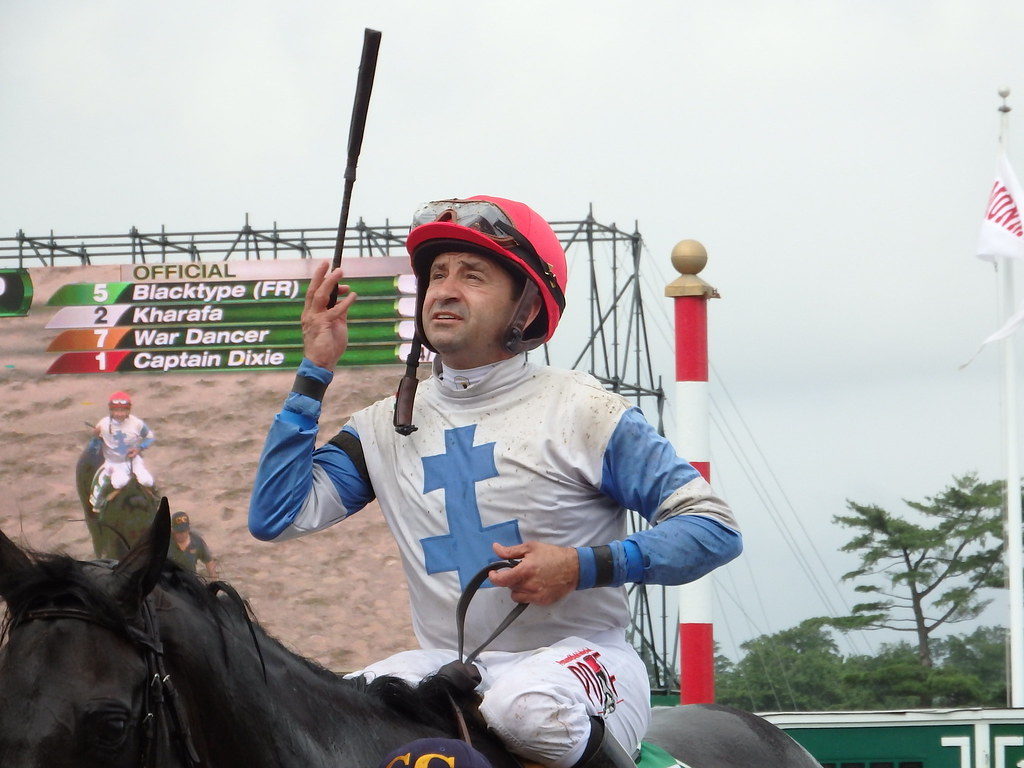 Jersey Joe Bravo hails another Monmouth Park winner – and the arrival of sports betting. Photo by The Racing Biz.

It was last Tuesday when someone approached Dennis Drazin and asked the chairman and chief executive officer of Darby Development LLC, the operators of Monmouth Park, about the possibility that sports wagering was in the near future for the troubled racetrack.

Drazin was confident, if not cocky, that a positive result was pending from the United States Supreme Court regarding sports betting at Monmouth Park and other New Jersey locations.

“I wasn’t like Joe Namath in the 1968 Super Bowl, guaranteeing it,” Drazin said. “But I was about 95 percent sure. I always believed that we were going to win.”

Drazin’s thoughts of six days ago became reality Monday, when the U.S. Supreme Court voted 7-2 that the Professional and Amateur Sports Protection Act (PASPA) was unconstitutional, lifting the ban on sports betting in the Garden State and other states as well.

The ruling ended seven years of costly legal wars (estimated at $9 million) by the New Jersey Thoroughbred Horsemen’s Association, of which Drazin, an attorney and long-time thoroughbred owner and breeder, is the president.

“It’s a historic victory for the horse racing community and the state of New Jersey,” Drazin said at a press conference held inside the William Hill room that now will become home for New Jersey’s first-ever legal sports book. “It’s the culmination of a long fight. I always thought this day would arrive and I’m pleased to proclaim victory.”

Drazin said that the first sports bets will take place at Monmouth Park “as soon as possible.”

“I’d like to be up and operating in two weeks,” Drazin said. “If I had my way, we’d take the first bet in five minutes. But two weeks is based upon an original opinion. There may be an even earlier date. But my intention is to be up and running in two weeks, unless someone tries to stop us.”

While there is no chance to appeal the decision to a court higher than the U.S. Supreme Court, there is a chance that the professional sports leagues, in particular, the National Football League, will try to block the process from taking place.

“I’m sure that the leagues will try on a national level,” Drazin said. “Right now, it’s a state’s right to allow sports betting. This is an important victory for state’s rights. Will Congress try to take it away? Maybe. But the best thing for us is to move forward. We’ll be surprised if the leagues try to stop it.”

But today was a day to celebrate.

“At the end of the day, this is terrific for the state of New Jersey,” Drazin said. “It was estimated last year that $400 billion was wagered illegally in this country. Of which, approximately $10 billion came from New Jersey. We’re bringing in a new revenue source. We were the lead in doing this. If we didn’t persevere, it wouldn’t have happened.”

New Jersey voters overwhelmingly approved sports betting in a 2011 referendum. But state legislation to permit it got pushed from court to court, all the way to the highest court in the land.

Governor Phil Murphy (D) lauded the ruling in a statement, saying, “We’re thrilled to see the Supreme Court strike down the ban on sports betting in New Jersey. Today’s ruling will allow New Jersey to move forward and be the first in the country.”

“This has been a fight that was tantamount to the survival of the horse racing industry in our state,” Drazin said. “Thoroughbred racing has been under some hard times in recent years. We’ve been struggling. This gave us the opportunity to build our industry. Monmouth Park has been the leader in this fight. Even when people told me we couldn’t win and it was time to give up, we kept persevering. I told people to hang in there.

Added Drazin, “It’s time to bring illegal wagering from out of the closet. Everyone is betting anyway. We wanted to legalize it.”

William Hill, one of the biggest sports books in the United Kingdom and in Las Vegas, has been committed to the Monmouth Park cause. In addition to the sports book location inside the track, William Hill is committed to building a $5 million facility adjacent to the track in the years to come. The revenue will also help Monmouth Park complete its plans for a concert venue and bring in area hotels and restaurants.

“We want to have other revenues than horse racing and sports wagering,” Drazin said.

Drazin is confident that sports wagering can be the wave of the future for the racing industry.

That was great news to some of New Jersey’s premier horsemen.

“I got chills when I got the word,” said trainer/owner Kelly John Breen. Breen, a New Jersey native, saddled two winners on Sunday, which also happened to be his 49th birthday. “I heard Dennis Drazin say that it’s going to bring Monmouth Park back to its glory days. It just makes me so excited to be a part of it all. It’s going to mean more racing and more days.  It’s music to my ears. Dennis said that the money that will be made will be put back into racing. It’s Glory Days like Bruce Springsteen sang. Asbury Park to Monmouth Park. This is definitely a big step for horse racing in New Jersey. Everything about it is good news for New Jersey.”

Chuck Spina was in a hospital as his wife was undergoing minor surgery.

“I usually don’t answer the phone, but on a day like this, I’m talking to everyone,” said the affable Spina, a trainer/owner who has raced horses at Monmouth Park for the last 48 years. “I’m so psyched. Everyone I know has been calling me. My kids, my clients, my friends. It’s such good news. It’s a long time coming. It’s been seven years and $9 million in legal fees. It’s about time New Jersey racing got a break. I’m thrilled beyond belief. I’m ecstatic.  You have no idea how happy I am. It’s such great news. We needed it. We needed a break.”

Spina was worried about the state of thoroughbred racing in the Garden State.

“We didn’t have enough dates,” Spina said. “It wasn’t enough to sustain us. Sports betting is going to allow for more days and bigger purses. This is great for the entire industry all the way around. It’s going to mean more jobs. People love to bet. Well, why can’t it happen here at Monmouth Park? It’s the best news we’ve had in a while.”

Jockey Joe Bravo, known “Jersey Joe” because he hails from the state and because he ruled the Monmouth riding colony for several years, agreed with Spina, for whom he’s raced in the past.

“I’m really proud of Dennis Drazin,” Bravo said. “It was a long seven years, but all of New Jersey is really proud of him. I can’t look into the future, but I think there’s definitely an upside in bringing people who wouldn’t necessarily come to Monmouth Park to see the beauty and perhaps fall in love with the ponies and want to come back. I know the people of William Hill have built that gorgeous sports book and that’s ready to go. I’m excited for what it means. It’s going to bring a little bit of (Las) Vegas to New Jersey.”