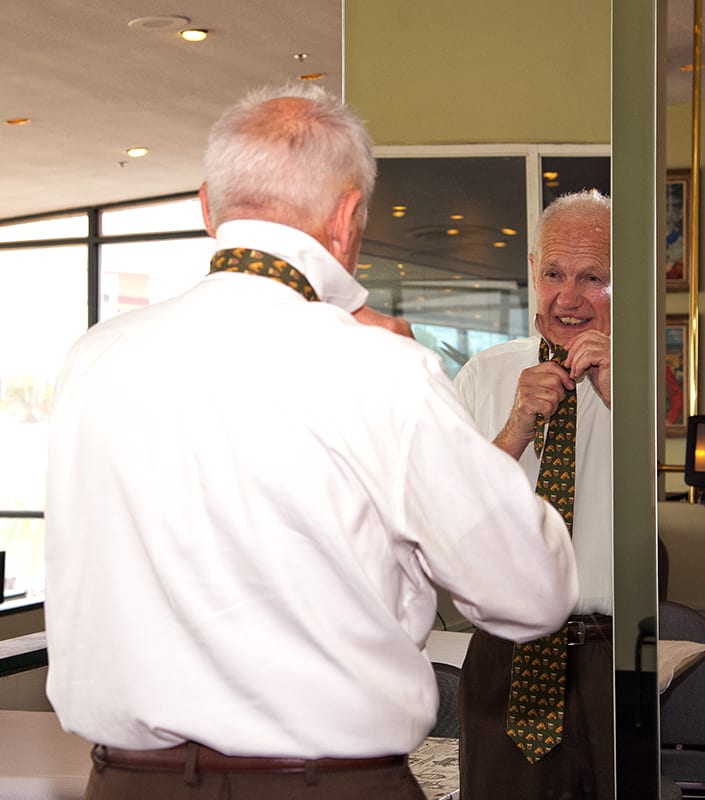 King Leatherbury puts on a tie prior to a press conference following his being voted into the Hall of Fame in 2015. Photo by Jim McCue, Maryland Jockey Club.

When it comes to the Maryland Million, King Leatherbury and Stephen O’Neill couldn’t be much more different.

Leatherbury, the octogenarian trainer who entered the national racing Hall of Fame in 2017, is the Million’s second-leading all-time trainer with 10 wins to his credit.

O’Neill, an owner who operates as Clover Hill Farm, has never even had a starter.

And the differences don’t end there. On Saturday at Laurel Park, Leatherbury will — if a single horse scratches out of the $50,000 Maryland Million Starter Handicap — saddle Classic Wildcat, yet another astute claim of his, in that spot. Classic Wildcat, at age 11, likely will be the oldest horse to race on Saturday.

One race later, in the $100,000, six-furlong Nursery, Clover Hill’s homebred Onemoregreattime, trained by Jerry Robb, will try his luck. The Nursery is for the youngest horses on the card, two-year-olds.

For both, the chance to have a runner one the biggest day for Maryland-sired runners, and one of the biggest days of the local racing year, has resonance.

“I hope I draw in and get a shot,” Leatherbury said. “I think I can get third money, and it’s always exciting to have something going.”

“We’ve been in this business a long time,” agreed O’Neill. “My father started in 1957, and this is our first Maryland Million starter and a dream come true.”

While Classic Wildcat is no Ben’s Cat — that Leatherbury-trained old-timer earned well over $2 million and won three Maryland Million races before his retirement (and unfortunate demise) earlier this year — he’s been plenty productive in his own right. Leatherbury claimed the son of Forest Wildcat for just $4,500 back in 2013.

He’s made 39 starts since, bolstering his lifetime mark to 90, with 25 of those being victories. His career earnings now top $417,000, virtually all of it done the hard way.

“He’s a remarkable old horse,” Leatherbury said. “He doesn’t come up with a big race all the time, but when he does, he’ll string a couple of them together.”

A good effort Saturday would be his third straight, and his most recent was especially impressive, a couldn’t-be-any-easier three-length triumph against lesser. But in a race which certainly seems to have some horses with early lick, this deep closer may have a shot to come running late and pick up the pieces.

“We just want him to run back to that last race,” Leatherbury said. Jevian Toledo will ride if Classic Wildcat (9-2 morning line) draws in.

While Classic Wildcat has made 90 starts and is a lot nearer the end of his career than the beginning, Onemoregreattime has made just four afternoon trips, with a win and two seconds to show for his labors.

Onemoregreattime, a Great Notion colt, is out of the Love of Money mare Onemoretimeagain. The latter, purchased by Clover Hill at the 2011 Fasig-Tipton fall yearling sale in Timonium for $10,000, was winless in four career starts.

But her first foal to race is making up for mom’s failings on the racetrack. He already has over $49,000 in earnings despite running up against some promising foes, including the graded stakes-placed Barry Lee. He broke his maiden by five lengths two back and last out gave up the lead late to finish second after leading most of the way.

This race may not be any easier. The 8-5 morning line favorite, Jamaican Don, ran a tough luck second last out in the First State Dash at Delaware Park after breaking his maiden by nine lengths at Thistledown. But O’Neill isn’t daunted.

“I think he’s got a big shot,” O’Neill said. “Jerry (Robb) says he’s training perfectly up to the race.”

Regardless, the sun is expected to be shining, the crowd enthusiastic.

“My father, my uncles, and my cousins, we’ve been in this business a long time, and it’ll be a true testament to a family business that we finally get to achieve this,” O’Neill said. “Win or lose, just to be here is a huge achievement for us and for our family and friends, and we’re really looking forward to it.”