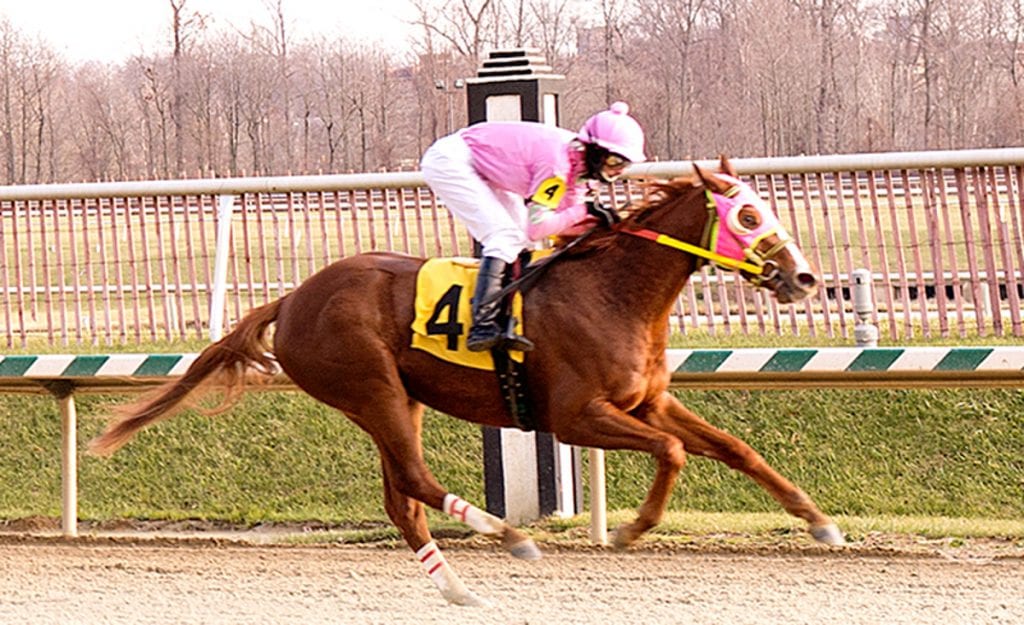 Talk about an apt name.

Stellar Wind has, indeed, been stellar — and now she will be a two-time Virginia-bred Horse of the Year. The ceremony honoring Virginia’s best horses and horsemen will take place Friday at Great Meadow on the eve of the Virginia Gold Cup.

Stellar Wind, a now-five-year-old Curlin mare, only made four starts in 2016, all in Grade I stakes, and first three were highlighted by a showdown with arch rival Beholder. After a runner-up finish to Beholder in Santa Anita’s Vanity Stakes, Stellar Wind turned the tables and beat her nemesis by one-half length in the Clement Hirsch Stakes at Del Mar, and by a neck in a thrilling Zenyatta Stakes at Santa Anita. She concluded her season by finishing fourth in the Breeders’ Cup Distaff after a troubled trip.

Out of the Malibu Moon mare, Evening Star, Stellar Wind was bred by Peggy Augustus’s Keswick Stables and Stonestreet Thoroughbred Holdings LLC. She earned $540,000 in 2016 alone and has a lifetime bankroll of $1,453,200 from 12 starts. She was the Eclipse Award as Champion Three-Year-Old Filly in 2015.

Valid, another million-dollar plus earner, was named Top Older Horse for the second consecutive year. The seven-year-old Medaglia d’Oro gelding raced four times last year, all in graded stakes at Gulfstream Park. His lone victory came April 2nd in the Grade 3 Skip Away Stakes. That followed second place finishes in the Hal’s Hope Stakes and Donn Handicap, and a third in the Gulfstream Park Handicap. Valid was bred by Edward Evans, earned $268,070 in 2016, and has amassed $1,101,647 in his 37 career starts. Trained by Marcus Vitali until this year, Valid is out of Grand Prayer by Grand Slam.

Long On Value put an exclamation point of sorts on his selection as Champion Turf Sprinter with a close runner-up finish in the recent Group 1, $1 Million Al Quoz Stakes in Dubai. The 6 year old Bill Mott trainee earned $118,270 from seven starts last year, highlighted by a victory in the Lucky Coin Stakes July 25th at Saratoga. He was bred by Snow Lantern Thoroughbreds and is by Value Plus out of Long Message by Orientate.

Rapid Rhythm was named Champion Female Turf Sprinter after collecting five wins in eight starts last year. The 5 year old daughter of Successful Appeal bankrolled $153,617 from key victories in the Oakley Stakes at Laurel and the Battle of New Orleans Stakes at Fair Grounds. The Mike Stidham trainee was bred by the Lazy Lane Farms, LLC.

Eight year old Rose Brier, named Champion Turf Horse, captured four races in 2016 and finished either second or third in his other three. Earnings from the seven totaled $180,560, which helped push his career total over the $500,000 mark. Bred by William Backer and trained by Jane Cibelli, the Mizzen Mast gelding won the Bert Allen Stakes for the third straight year in addition to the Henry Clark and Edward Evans Stakes.

In the three year old category, Sticksstatelydude was named Champion Male while Queen Caroline took Champion Female honors. The former had an allowance win at Belmont July 15th then won the Grade 3 Discovery Stakes at Aqueduct in mid-November. Bred by the Canyon Lake Thoroughbreds, the Kiaran McLaughlin trained colt earned $243,540 in ’16. Queen Caroline won four straight last year beginning with a maiden special weight score at Pimlico May 21st followed by three stakes triumphs. The Blame filly crossed first in the Nellie Mae Cox, TaWee and Indiana Grand Stakes. She was bred by the Morgan’s Ford Farm and is owned by Virginia based Amy Moore.

Lime House Louie and Taleoftheprincess were named Champion two year old male and female horses respectively.  The former captured a maiden special weight race at Charles Town July 23rd then won the Jamestown Stakes at Laurel in September. The latter, a Tale of the Cat filly, collected a maiden claiming win at Keeneland and an allowance optional claiming triumph at Fair Grounds November 27th. Lime House Louie was bred by Carlos S.E. Moore and Gillian Gordon-Moore and is out of Mystic Boy by Housebuster. Taleoftheprincess was bred by the William Backer Revocable Trust and is out of the Waquoit mare, Frost Princess.

Zanclus was named Champion Steeplechase Horse based on wins at Foxfield and Great Meadow, and allowance runner-ups at Fair Hill, Shawan Downs and Pine Mountain. The seven-year-old son of Xenodon was bred and is owned by Sara Collette, and is trained by Neil Morris.

Doug Fout will be recognized as the Top Virginia Trainer. Horses in his stable made 103 starts last year and earned $505,485 in purse monies. His Hardrock Eleven captured the $75,000 William Entenmann Memorial Hurdle Stakes at Belmont and a $65,000 allowance race at Saratoga. Fout’s Help from Heaven scored a similar allowance victory at Saratoga. He also had a pair of wins on the fall Gold Cup card at Great Meadow with Canadian Gold in a maiden special weight race and with Cryptos’ Holiday in an allowance.

Leading Breeder honors will go to the late William Backer, who passed away in 2016. Horses he bred won 35 races  including the Penn Oaks and Honey Ryder Stakes (both by Sweet Victory), the Punch Line Stakes (by Moon River), and the trio of stakes won by Rose Brier. Chorus Line, a 4 year old Parading filly, didn’t win a stakes race but did  finish the year with three straight wins on the New York circuit. Mr. Backer won $56,524 in Breeders Fund awards in 2016, tops among Virginia breeders.

A Special Achievement Award will be presented to Tough Weather, a 6 year old Wiseman’s Ferry mare who won eight races in 2016. She amassed 13 “in the money” finishes from 15 starts and bankrolled $119,989 last year. The wins came from three different tracks — Delaware Park (3), Penn National (3) and Laurel (2). Tough Weather was bred by Sam English II and is trained by Scott Lake.