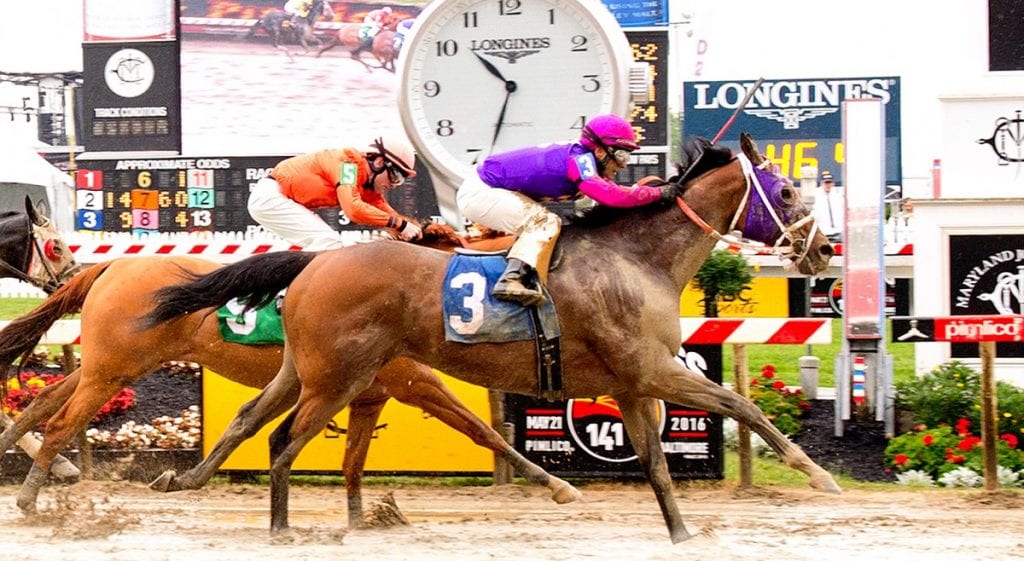 Homeboykris won the final race of his career, the first at Pimlico on Preakness day 2016. Photo by Jim McCue, Maryland Jockey Club.

If a tree falls in the forest, and the lumberjacks team up to muffle the noise, does it make a sound?

That, in a sense, is the challenge facing horse racing at the moment. While the news out of the Jockey Club’s Equine Injury Database is undeniably positive — equine fatalities in 2016 were at their lowest level since the project’s 2009 inception — the impact of that news is to some extent blunted because so few of the tracks that participate in the database allow their numbers to be seen by the public.

The Jockey Club, through the Equine Injury Database, has been collecting and publishing injury data since 2009. According to the Jockey Club, tracks representing 96 percent of flat racing days participate in the database. Yet just 25 of the participating tracks make summary statistics available. The roster of those that don’t includes Churchill Downs, Arlington Park, and Tampa Bay Downs, among many others.

Closer to home, only Delaware Park, Laurel Park, and Pimlico share summary data. Most of the region’s tracks — including Charles Town, Monmouth Park, Parx Racing, and Penn National — do not.

The tracks that do not make their data available to the public typically argue that they fear misinterpretation: that the public will be unable to put the numbers in proper context and will reach the wrong conclusions about how the sport treats its horses.

That’s not an entirely spurious argument. When numbers are small — and the number of fatalities in a year of racing at any given track is small — minor changes can seem momentous. Delaware Park, for example, had just two fatalities last year; if that number rises this year to, say, six, which still would be a better than average year there, it’s not hard to imagine one or another anti-horse racing group bemoaning that fatalities had “tripled” in just a year as evidence of the cruelty of the sport.

What’s more, a great deal is unknown about what causes year-to-year variation in racing fatalities. In any given year it could be any number of things: rules changes, weather, changes in the population of horses or the quality of horsemen, alterations to racing schedules or the condition book.

All of that can make it tough on the sport to defend itself when any bad news can bring down a cascade of criticism.

Yet in the social media environment in which we live, the industry’s decades-old duck-and-cover approach to the public is no longer viable.

As we have seen repeatedly, silence no longer begets forgetfulness; it gives rise to, well, in some circumstances lunacy. For example: the not-quite-a-genius who drove from North Carolina with a gun to rescue the children he believed to be trapped in a Washington, DC restaurant as part the phenomenally stupid (and non-existent) Pizzagate conspiracy.

Or consider the response, just last Preakness time, to the death of Homeboykris, whose connections were all but accused of putting a gun to the horse’s head (a case in which the presence of an equine medical director to explain what had happened could have helped).

And it cuts both ways.

Monmouth Park, for example, had “one our lowest (fatality) percentages since keeping these statistics,” according Bill Knauf, vice president of business operations at the Oceanport track. Who knew? And how could you know?

By contrast, Delaware Park had its best year injury-wise — and received credit for it because its efforts were known.

In the end, it’s too easy for tracks and the industry to throw their hands up and say that they’re misunderstood. What they really need to do is to figure out why they might be misunderstood — and how they can become less so.

Those steps might include, for example, more outreach on the steps specific tracks are taking to promote safety or efforts to present data in a way that smooths out some of the year-to-year vagaries (for example, presenting data not just in year-to-year but rolling three-year formats).

Of course, any strategy would be more elaborate and would evolve over time. The point, though, isn’t the particulars.

The point is the mindset — because it’s ultimately not the public’s job to understand the sport; it’s the sport’s job to make itself understood. And the tracks bear a responsibility in doing that.