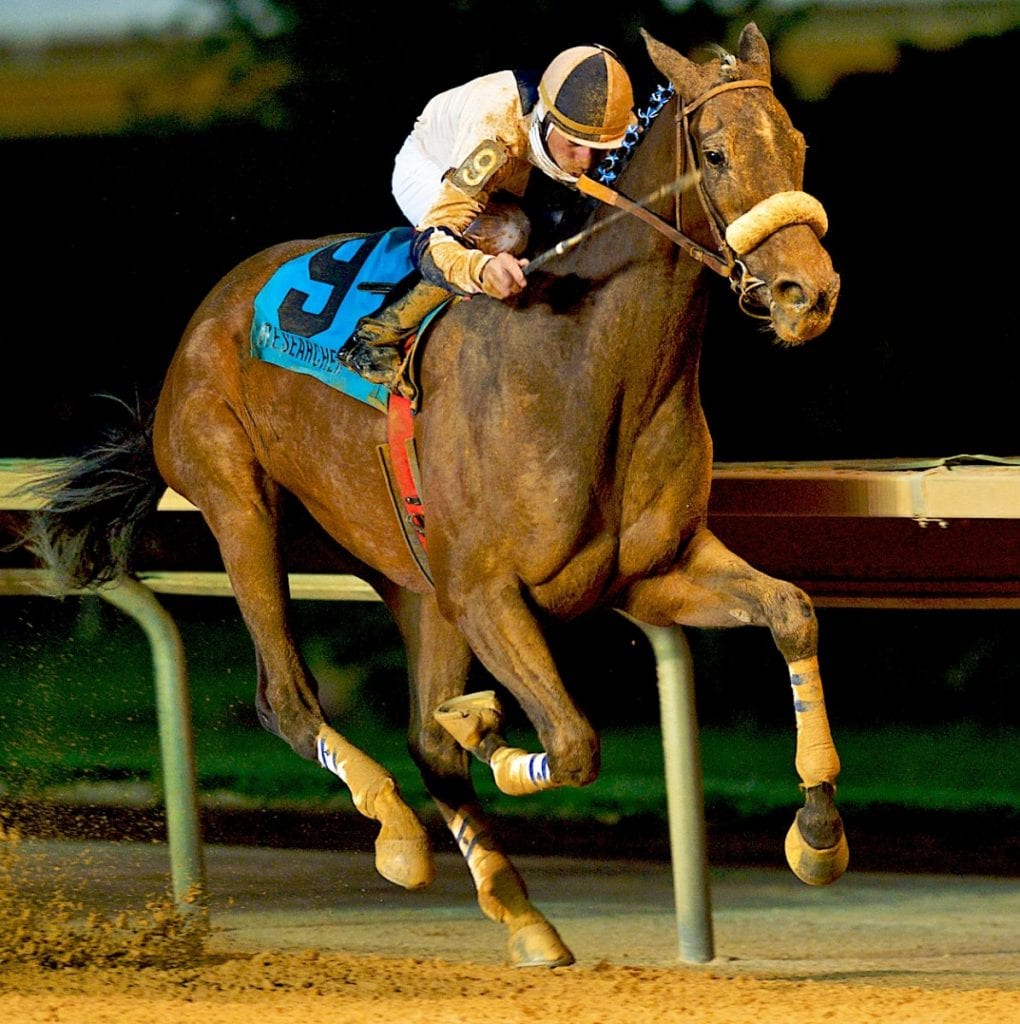 In the days leading up to the inaugural running of the Charles Town Classic, many observers had all but conceded the first-place check to Commentator, a multiple Grade I winner for trainer Nick Zito, even though he was making his seasonal debut and first attempt at three turns in the Classic.

But in a true David vs. Goliath performance, it was hometown hero Researcher who took down the first edition of the Classic, in 2009. A year later, he took the second one, as well, to give local horses and horsemen a resounding boost.

The ninth running of the now-Grade 2 event will take place April 22 at Hollywood Casino at Charles Town Races. Post time for the card is 12:45 EDT.

In many respects the inaugural victory by Researcher, a Two Smart gelding trained by Jeff Runco, shouldn’t have been a huge surprise. Researcher had already won the Grade 3 Queens County Stakes at Aqueduct five months earlier, and he won a local prep race for the Classic in sharp fashion – by 22 lengths. He would eventually conclude his career in flat races – he was later unsuccessfully transformed into a jumper – by winning 11 of 15 starts over the Charles Town strip.

“Going into that first one, I remember that Researcher was doing really well and he won the local prep race,” Runco said. “So, when the entries were taken for the Classic, I thought he had a shot. I had a lot of respect for Commentator and his connections. He was a really good horse and Nick Zito is obviously one of the best. But I knew my horse would run a big race, especially under the lights. He trained at Charles Town and, up to that point, most of his races had been at Charles Town. It was just going to be a matter of getting a good trip and then seeing what he could do turning for home.”

When Penn National Gaming officials first conceived of the Charles Town Classic, now a Grade II event worth $1.25 million, much of the concern among local horsemen was that the purse – the biggest in the track’s history — would get divided among out-of-town owners. Researcher’s wins in the first two runnings helped assuage local fears and gave a boost to what PNG was trying to accomplish.

“Back in 2008 when we came up with the idea to run the Charles Town Classic for the first time in 2009, we obviously had no way of knowing there was a horse on the grounds that would be able to do what Researcher did,” said Erich Zimny, Vice President of Racing Operations at Charles Town. “But when he won his prep here by more than 20 lengths and set a track record, it was pretty clear that they’d have to really run to beat him. Away from Charles Town, he was a graded stakes winner in New York and lost the [Grade I] Stephen Foster by two lengths, but here on this track he looked unbeatable sometimes”

Zimny had hoped that Charles Town Classic would attract several top-notch horses that could help get the race on the map, and the arrival of Commentator gave the race instant credibility. Commentator would eventually conclude his career with 14 wins and earnings of just over $2 million from 24 starts, including victories in the ’05 and ’08 Whitney and ’08 Massachusetts Handicap.

“Some people forget that many considered Commentator to be the top older horse in the country at the time,” Zimny said. “He just won his second Whitney Handicap the year before amongst other wins. And, outside of him, it was still a salty race. But when Researcher took the lead turning for home it sounded like you were at a football game when the home team scores a touchdown. To have the stars align where you put on a big race at a smaller venue for the first time and you have the home town horse beat the top older horse in training – you couldn’t write a script any better.”

Runco, who won the West Virginia Breeders Classic last fall with homebred Slip the Cable, who is expected to make his seasonal debut on the undercard of the Charles Town Classic next weekend, admitted to being hailed as a local hero in the days and weeks after Researcher won the inaugural edition of the Classic and again after he successfully defended that title one year later.

“We have a lot of good horsemen here and we race against each other four nights a week,” Runco said. “But when Researcher won a lot of the other trainers were really complimentary. I don’t know if too many people expected him to win it, but when he won it the first time, he was really well-received. We ran against some really good horses both times and he was a good horse, especially here. A lot of the other trainers here knew him and they knew how good he was, and I think they were happy to see a local horse win it.”

Zimny thought the same feeling swept through the grandstands as many local racegoers could finally claim a sense of having one of their own compete successfully against some of the sport’s top runners.

“I remember how good people felt leaving the races that night,” Zimny said. “There was a ton of pride about the track and it should have been. It helped our program so much to have a horse people identified with Charles Town that could compete with the caliber of horses he’d compete against. To move the needle forward we had to take some steps to try and integrate our racing into the national landscape more and that one horse was a big part of helping us do that.”

When Researcher, bred in Virginia by the Virginia Tech Foundation out of the Apalachee mare Wild Magnolia, won the second edition of the Classic after a similar campaign leading up to the main event, finishing second in the Grade III Queens County and then winning a local allowance prep in sharp fashion, his repeat in the nine-furlong affair validated his inaugural triumph.

“That was his last start for me, but he did everything that I could have asked of him leading up to the race and then on Classic night,” Runco said. “He had shown that he could compete with some of the best older horses in the country. He ran well wherever he went and he won the Queens County in New York one year and then was second the next year. But when he won the local prep race over the track, I knew he was going to run well in the Classic. I didn’t know if he would win it, but he was like the third choice and he ran his race and that was good enough to win it again. Those types of horses just don’t come along too often.”

Researcher, owned by for most of his career by Rutledge Farm, was sold just before the 2010 Classic to Kinross Corporation. He made three starts on the flat in 2011 – finishing fourth in all three, including two graded events – before shifting to jumps. He failed to break his maiden in a half-dozen steeplechase tries, but that did nothing to diminish his flat racing career.

“When they sold Researcher before the 2010 Classic, it was pretty closely guarded,” Zimny said. “We had no idea until entry day. To go out and win the race again really validated everything that happened the year before.”