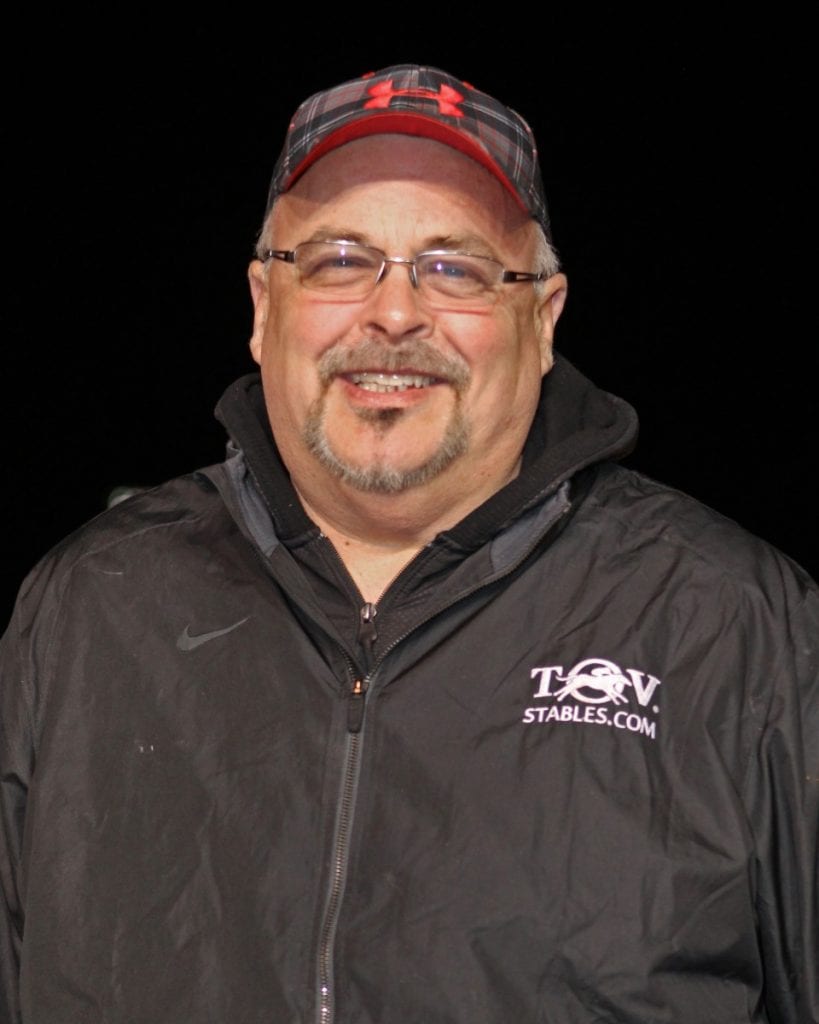 Charles Town horseman Ronney Brown has long been affiliated with a pair of talented distaffers that he trained, Original Gold and My Sister Pearl, both of which have stakes races named for them.

But during a career which has seen him win more than 2,400 races, Brown has just as often been admired for his ability to succeed with modest stock. To wit, one of his best horses right now is a reformed claimer named Rockhopper Penguin, currently riding a three-race win streak while ascending the class ladder.

Brown indicated there was no secret remedy to turning Rockhopper Penguin into a formidable local runner. The Rock Hard Ten gelding began his newfound winning ways on February 11, then notched his second straight tally on March 3 before capturing a three-turn allowance/optional claiming affair in a three-horse photo where 2-5 choice Big Bad Dude settled for third behind the ‘Penguin’ and Heart Over Mind. Rockhopper Penguin, who now sports eight wins and earnings just shy of $90,000 from 18 career tries, is never going to supplant Original Gold or My Sister Pearl as his top horse, but Brown is enjoying the brief ride.

“Really, we just gave him a little time off and allowed him to put on some weight,” said Brown, currently a distant second to Jeff Runco in the Charles Town trainer standings in both wins and earnings. “He came back a little bigger than we expected, but the added weight has done him some good. I didn’t expect him to be able to beat Big Bad Dude last time out. That’s a nice horse. But Rockhopper is really good right now. He’s a West Virginia-bred, so he’s still got plenty of conditions he can run in where the West Virginia-bred races won’t count against him.”

His top trainee, Original Gold, who has a stakes race named in her honor on the undercard of the April 22 Charles Town Classic, won the lucrative Cavada in ’04 and ’05 and eventually concluded her career with a 7-4-2 slate and nearly $375,000 banked from 17 outings.

“They were really good years and she was a big part of them,” Brown said. “But I’ve been fortunate to do as well as I have for a long time. All 50 horses of mine are stabled at Charles Town, and each year I breed eight to 10 mares and hope that they throw something good. This year I’m going to have two-year-olds by Friesan Fire, Limehouse, Windsor Castle and Gemologist hitting the track. I’ve already had a couple of them put in workouts. In the meantime, I’m glad to have Rockhopper Penguin winning races and keeping everyone fed.”

While Original Gold was among the better two-turn specialists that Brown trained, his other top trainee, My Sister Pearl, was better at the three-turn route distances over the Charles Town strip. In fact, she still holds the track record for one-mile and one-sixteenth – 1:43.83 – set in a 2001 allowance. My Sister Pearl won a couple of local stakes and concluded her career with a 9-5-1 slate and $157,000 bankroll from 30 career tries.

“Both of those mares did really well for me,” Brown recalled. “Original Gold was better in the sprints, but My Sister Pearl was very good in the longer races up here. Of the two, Rockhopper Penguin is more like ‘Pearl.’ I think he’s going to continue to do well in the longer races up here. I’m not sure how long he can keep his win streak going, but I would like to keep him sound and happy for the stakes races at the end of the year. With any luck, he’ll be good enough to go in the [West Virginia Breeders] Classic in the fall. That’s a long way off, but hopefully that’s the plan.”

Local race goers also remember Brown’s success with Twenty Hawks, another hard-knocking sort who posted a 12-7-12 slate and $340,000 bankroll from 69 career tries, and Judge Carr, who earned $111,000 for Brown. Judge Carr was recently claimed from Brown for a $30,000 tag, a staggering sum at Charles Town where $5,000 claimers are far more prevalent. It’s the most expensive claim made at Charles Town since at least the beginning of 2015.

Meanwhile, the numbers keep piling up for Brown’s operation. He turns 56 on Mach 29, and through Tuesday, March 28, Brown had saddled 2,419 winners from 14,314 runners in his career. If he exceeds the 100-win plateau again this season, he will also reach the 2,500-victory milestone. He is poised to pass the $27 million earnings mark soon, too – 31 years after Shy Bo gave him his first Charles Town winner.