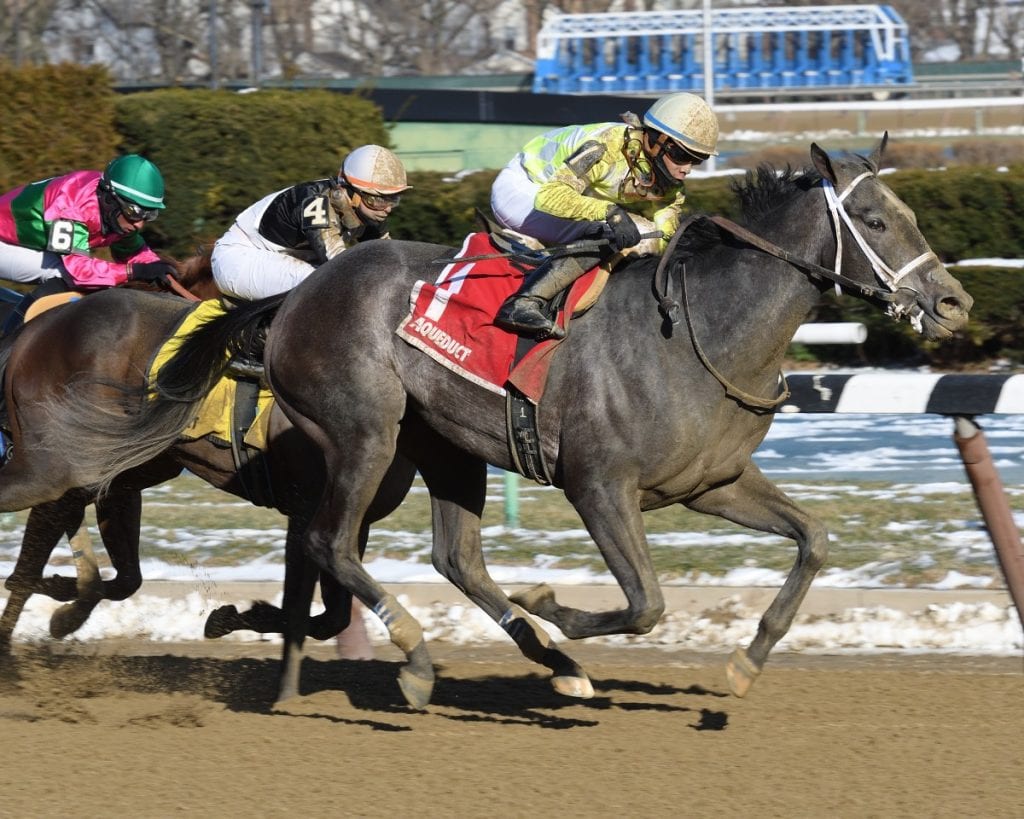 Dennis A. Drazin’s homebred Sunny Ridge has been named 2016 New Jersey-bred Horse of the Year and champion 3-year-old male by the Thoroughbred Breeders’ Association of New Jersey. The son of Holy Bull out of the Songandaprayer mare Lignum Vitae was leading New Jersey-bred money earner of 2016, having earned $308,250 from six starts including a victory in the Withers Stakes (Grade 3) and a third place finish in the betfair.com Haskell Invitational (Grade 1).

Sunny Ridge, trained by Jason Servis, has $833,002 in career earnings.

David Gruskos’s Chublicious was honored as champion older male and champion sprinter based on his three stake victories in six starts during his 2016 campaign. The Joe-Dan Farm bred son of Hey Chub out of Sassy Broad, by Arch won the John J. Reilly Handicap, Mr. Prospector Stakes and New Jersey Breeders Handicap. Trained by Jorge Navarro, Chublicious earned $149,414 in 2016.

Isabelle de Tomaso’s homebred Irish War Cry was named champion 2-year-old after winning both of his starts in 2016. The son of Curlin out of Irish Sovereign, by Polish Numbers won his initial start on November 11 by 4 ½ lengths and followed up with a victory in the Marylander Stakes on December 31. The Graham Motion trainee finished the year with earnings of $82,800.

Diamond Play is the champion 3-year-old filly after winning three of her nine starts in 2016 for Thoroughbred Investments Fund, LLC. The daughter of E. Dubai out of Forbidden Isle, by Belong to Me won her three races in consecutive starts between July 30 through October 3 by a combined 18 ¼ lengths. Diamond Play was bred by Colonial Farms and is trained by Anthony Margotta, Jr. The champion filly earned $142,104 during 2016.

Joseph & Gayle Ioia’s Bustin Out was named champion older female after winning three of her five starts in 2016. Dianne Boyken bred the daughter of Bustin Stones out of the Disco Rico mare Disco Shaker who won the Eleven North Handicap and finished second in the Open Mind Handicap and Regret Stakes during her championship campaign. Bustin Out, trained by Chuck Spina, earned $131,838 in 2016.

New Farm homebred Rainbow Heir was named champion turf runner after winning the Gin Rummy Champ Stakes at Gulfstream Park West and a third place finish in the Troy Stakes at Saratoga. The 2014 New Jersey-bred Horse of the Year made a successful transition to the turf after winning four stakes on the dirt including the Jersey Shore Stakes (Grade 3). The son of Wildcat Heir out of Rainbow Pride by Prospectors Gamble earned $113,985 in 2016 under the direction of trainer Jason Servis.

Irish Sovereign was honored as Broodmare of the Year for 2016. Isabelle de Tomaso owns the 17 year-old mare by Polish Numbers out of the Beau Genius mare, Irish Genius. Irish Sovereign has produced six winners from the six foals, all New Jersey-breds, including the 2016 champion 2-year-old Irish War Cry and the graded stakes placed Irish Strait who has career earnings of $169,218.

Irish Sovereign has a yearling filly by Lookin at Lucky named Lucky Irish and is in foal to Graydar.

Hey Chub is the Thoroughbred Breeders’ Association of New Jersey’s Stallion of the Year for 2016. The 17-year-old son of Carson City out of Donna Doo by Spend A Buck was a multiple stakes winning New Jersey-bred hit the board in 30 of his 36 starts and earned $441,755. Hey Chub is the sire of 36 foals of racing age and 19 of his 23 starters have reached the winner’s circle. Hey Chub has sired stakes winners Chublicious ($318,194) and Chubble Maker ($209,066) along with stakes placed Chubbiana ($119,872). Hey Chub is owned by Daniel J. Lopez’s Joe-Dan Farm and his progeny have lifetime earnings over $1.7 million.