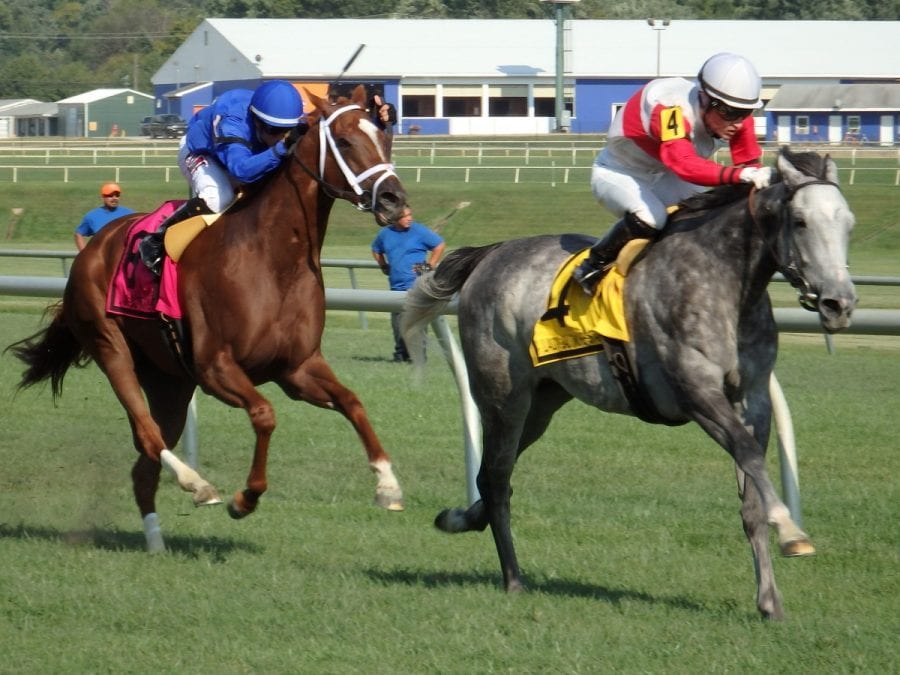 In a pair of of turf route stakes at Laurel Park Saturday, favorites delivered commanding victories that validated the high regard in which bettors held them.

The 45th running of the Lady Baltimore for fillies and mares 3 and up at 1 1/16 miles on the grass was the richest of six stakes worth $575,000 in purses on an 11-race Laurel Turf Festival program.

Onus, trained by Hall of Famer Shug McGaughey, broke cleanly from post 4 and settled in third as multiple stakes winner Monster Sleeping and New York shipper Robillard duked it out through an opening quarter-mile in 23.74 seconds and a half in 47.37.

Boyce kept Onus in the clear on the outside, swung a path wider on the turn for home and set down after front-running Robillard approaching the eighth pole before drawing away late. Robillard stayed up for second, a half-length length in front of Tuttipaesi, followed by Ginger N Rye, Vielsalm, McArthur Parkway and Monster Sleeping.

Rating alongside pacesetter Eyeplayeveryday through the first 1 ¼ miles, Merriebelle Stable’s favored Renown took command after straightening for home and cruised to a one-length win in the $100,000 Laurel Turf Cup.

“We really just had the perfect trip. There wasn’t a lot of speed so we sat there right off of it and she made a nice run at the end. They had her ready and she’s a brilliant horse,” Boyce said. “She’ll pretty much do whatever you ask. Today she was a little keen but she settled nicely and it all worked out.”

Boyce won three times aboard Onus last summer and fall at Laurel, breaking her maiden in July, stepping up with an allowance win at the Lady Baltimore distance in August and capturing her stakes debut in the Commonwealth Oaks (G3).

“She doesn’t tell me how to ride and I won’t tell her how to run. That’s how that one works,” Boyce said. “She’s a really cool horse and I’m just so grateful that Shug and Mr. Janney keep putting me back on her.”

The Lady Baltimore marked Onus’ return to Maryland, where her three consecutive victories came by a combined 23 lengths. The 4-year-old daughter of Grade 1 winner Blame had won once in five subsequent starts, beaten 2 ¼ lengths in the Diana (G1) and Ballston Spa (G2) this summer at Saratoga Race Course.

Bred in Kentucky, Onus now has five wins and a third and $318,406 in purse earnings from 12 lifetime starts.

“We hoped this would be a confidence boost for her, having thrown her in the deepest waters, so it’s nice to find a spot where she could maybe dominate. She did so well coming out of those races at Saratoga, we thought this was perfect,” Janney said. “It’s quite clear she knows how to ride her. Clearly, Forest suits her wonderfully.”

Two races later, in the Laurel Turf Cup, Renown also lived up to his favoritism.

Rating alongside pacesetter Eyeplayeveryday through the first 1 ¼ miles, Merriebelle Stable’s favored Renown took command after straightening for home and cruised to a one-length win in the $100,000 Laurel Turf Cup.

Ridden by Angel Cruz for trainer Elizabeth Voss and favored at 6-5 in a field of seven older horses, Renown ($4.40) ran 1 ½ miles in 2:27.22 over a firm All Along Turf Course. Generous Kitten came on late for second, 1 ¼ lengths ahead of Whitman’s Poetry third with Motivational another neck back in fourth.

Bred in England by Juddmonte Farms, Renown was one of only two horses to have won previously at the distance, including the Cape Henlopen Stakes over a yielding course July 9 at Delaware Park. Most recently, he was third in the 1 5/8-mile John’s Call Aug. 24 at Saratoga.

The win was Renown’s fifth from 10 lifetime starts, and pushed his career bankroll to $157,391.