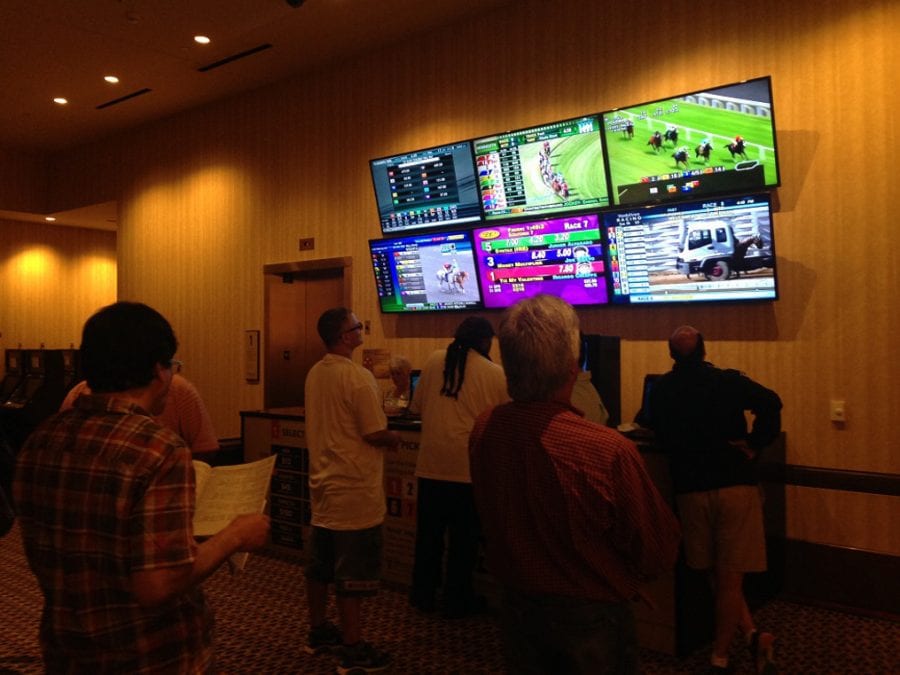 Wagering at an off-track facility.

Off-track wagering will return to Virginia, after the state’s Racing Commission approved a proposal to hold off-track betting at Breakers Sports Grille in Henrico.

It will be the first off-track betting facility (OTB) opened in the Old Dominion since Colonial Downs shuttered its OTB network in 2014.

According to the ABC network affiliate in Richmond, the facility will have four self-service wagering machines.

There’s no timetable for the facility to open, Virginia Equine Alliance spokesman Darrell Wood told Richmond.com, other than the Alliance’s desire to have it open “as quickly as possible.”

But it was VEA executive director Jeb Hannum who had perhaps the most apt description of the situation in the Old Dominion: “Humpty Dumpty fell off the wall, and now we’re putting the pieces back together,” he said.

The nasty impasse between Colonial Downs and the Virginia Horsemen’s Benevolent and Protective Association (HBPA) went farther than perhaps anyone expected, eventually leading to the demise of Colonial Downs itself and the shuttering of its OTB network and putting the Thoroughbred industry itself on life support.

The Virginia Equine Alliance — an umbrella group including the HBPA; the breeder-oriented Virginia Thoroughbred Alliance; the Virginia Harness Horse Association; and the Virginia Gold Cup Association — is now in the role of Humpty Dumpty-fixer.

Since the demise of Colonial Downs, the VEA has kept the flame burning by running a handful of flat races each year at Great Meadow, the steeplechase course near The Plains that is home to the Virginia and International Gold Cups; hosting several stakes for Virginia-breds at Laurel Park (and, this coming Saturday, at Pimlico); and continuing to run the state’s graded events, particularly the Commonwealth (formerly Virginia) Derby and Oaks.

The VEA has also been working, slowly, towards transforming Morven Park, near Leesburg, into the northern Virginia flat track the industry has always coveted.

And now, the first OTB in what the industry hopes will be a new network opens amid…

Well, this being Virginia, not everyone was happy. Industry gadfly Tad Berman criticized what he called “a continuing process of siphoning money out of” the state.  And the ABC affiliate was shocked, shocked, to learn that races with Virginia purse money would take place out-of-state.

Still, and all, this looks to be one more step in the Virginia thoroughbred industry’s efforts to reconstruct itself.

The news that the Maryland Jockey Club would sell off about 20 acres of its Pimlico Race Course property to Sinai Hospital caused plenty of angst on social media.

“This doesn’t sound good to me,” one Facebook commenter said.

“Do I hear the fat lady warming up?” another wondered.

Ahh, Maryland, where speculation about the future of Pimlico is always in fashion.

Perhaps the fat lady is warming up, but this deal doesn’t have anything to do with it.  In fact, this is about as much of a non-story as you’re likely to find.

Outside of Preakness weekend, Pimlico hasn’t needed the lots, which sit across the track from the grandstand, in years. In fact, Sinai has used the property — reportedly free of charge — for more than 10 years, according to the Sun.

Sinai wanted the property, which it says it intends to keep as parking, and the Maryland Jockey Club didn’t need it, except for two days a year — and it says it has an agreement with Sinai to continue to be able to use the lots for Preakness parking.

As to the future of Pimlico, the only game in town at the moment is the Maryland Stadium Authority’s study.  That study, which is expected to take a year or more, will determine what needs to happen at Pimlico to make it the type of home an event like the Preakness needs and what that’s expected to cost.

As to how such a project would get paid for, that’s a question for a different day.  But it’s perhaps notable that the two biggest projects with which the Stadium Authority is associated — Oriole Park at Camden Yards and the Ravens’ M & T Bank Stadium — were primarily paid for by taxpayers.