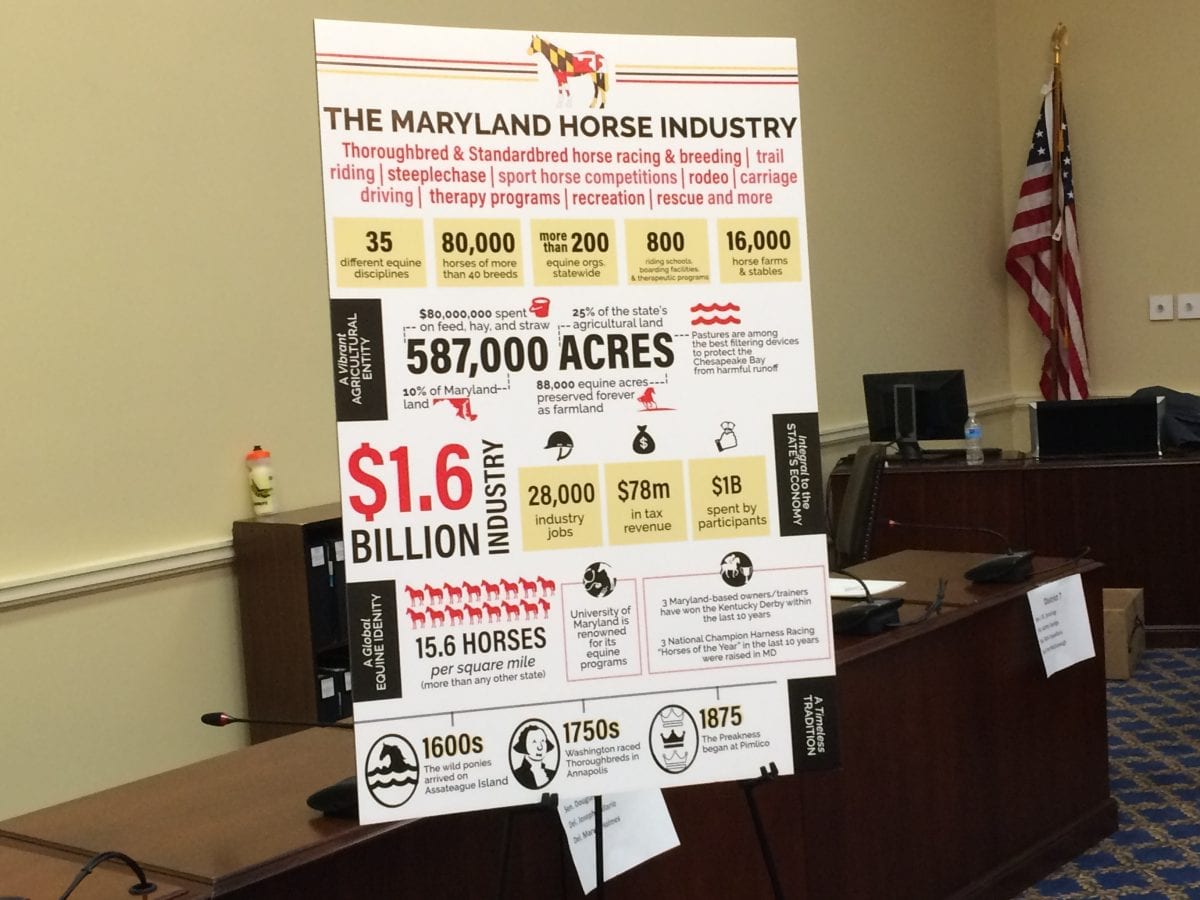 Tuesday the Maryland horse industry partners announced that they have commissioned an economic impact study on the industry’s fiscal contributions to Maryland, the first of this scale since 2005. The study will be conducted by Sage Policy Group, and the results will be unveiled in conjunction with the Jim McKay Maryland Million Day in October of this year.

“As a $1.6 billion dollar industry, the Maryland horse industry is a vital part of our state’s economy and way of life, and all of its participants, from veterinarians and horse owners to racetracks and hospitality vendors, appreciate the Administration and Legislature’s efforts to revitalize the industry, particularly in the past several years,” said Dr. Kathleen Anderson, President of the American Association of Equine Practitioners and Owner of Equine Veterinary Care at Fair Hill Training Center.

“We are uniquely fortunate to have so many supporters in our state government and throughout Maryland, and that is what sets Maryland’s horse industry apart from other states,” she continued. Fair Hill Training Center in Cecil County, one of the premier Thoroughbred training facilities in the United States, is a 5,656 acre Natural Resources Management Area owned by the State of Maryland.

In appreciation of Maryland’s commitment to the prosperity of the equine industry, Maryland-based artist Sam Robinson presented a gift of art to the State of Maryland, accepted by Lieutenant Governor Boyd Rutherford at the Kick-Off. The framed art was a painting titled “Autumn Afternoon,” a beautiful horse farm scene.

Senator J.B. Jennings (R-7) and Secretary Mark Belton of the Department of Natural Resources spoke to the importance of the horse industry to Maryland’s economy, culture, and environmental preservation.

Delegate Seth Howard (R-30B), sponsor of HB660 to establish an annual Equestrian Day, described how the legislation would recognize Maryland’s time-honored equestrian and horse racing traditions. HB660 would designate the final race of the Triple Crown as Equestrian Day in Maryland.

The day also included a kick-off and issue briefing, reception, and constituent meetings with over 25 legislators. Hundreds of Marylanders from around the state came to the State’s Capitol to advocate for the industry.

Earlier in the day, Ross Peddicord, Executive Director of the Maryland Horse Industry Board, commented, “We need to continually remind legislators and our fellow citizens of the strength of our industry and its positive impact on our state, from the wild ponies at Assateague to trail riding stables in Garrett County to events like the Preakness, Maryland Million, Maryland Hunt Cup, Fair Hill International, and Capital Challenge Horse Show.”

“Although we all have our special disciplines, we are united in promoting the major benefits that horses provide to improve people’s lives and to enrich our state’s cultural and economic landscape,” he added.