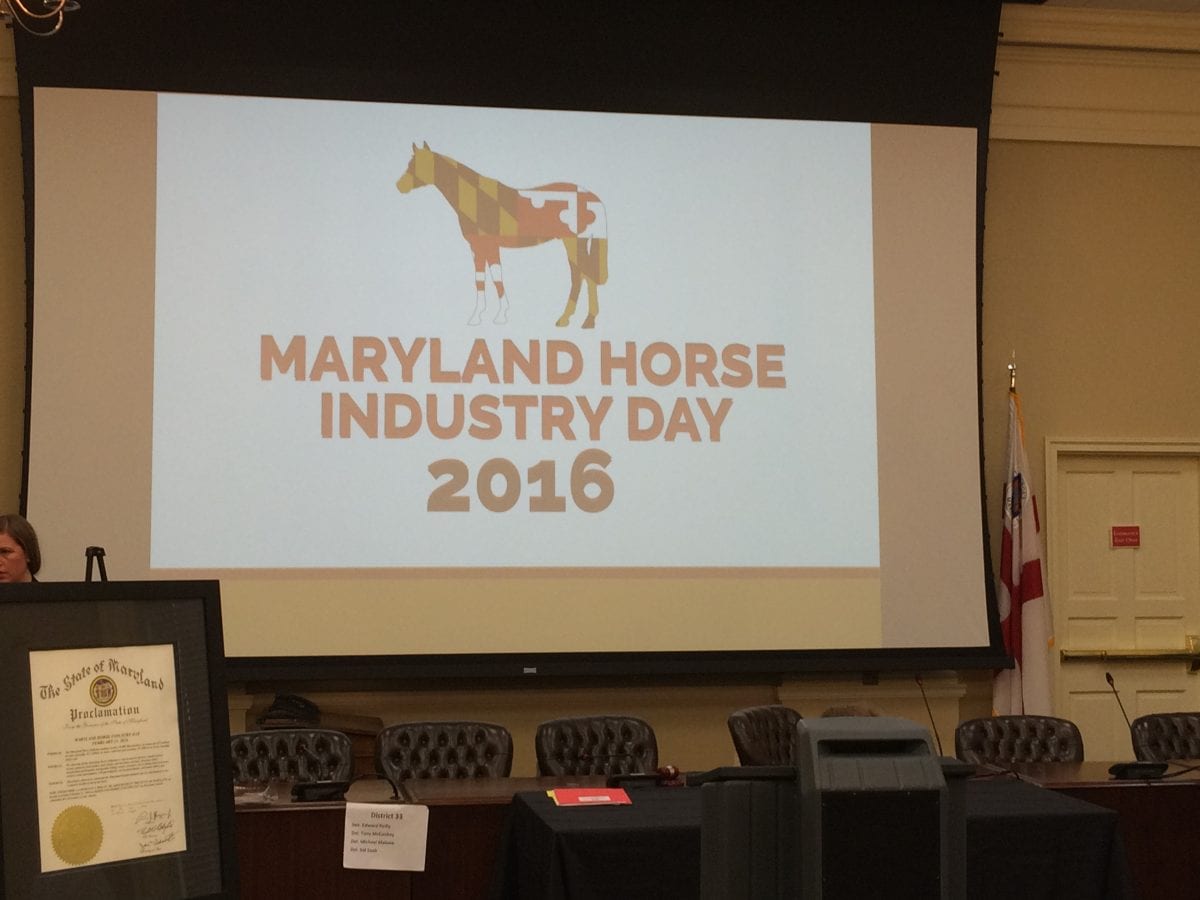 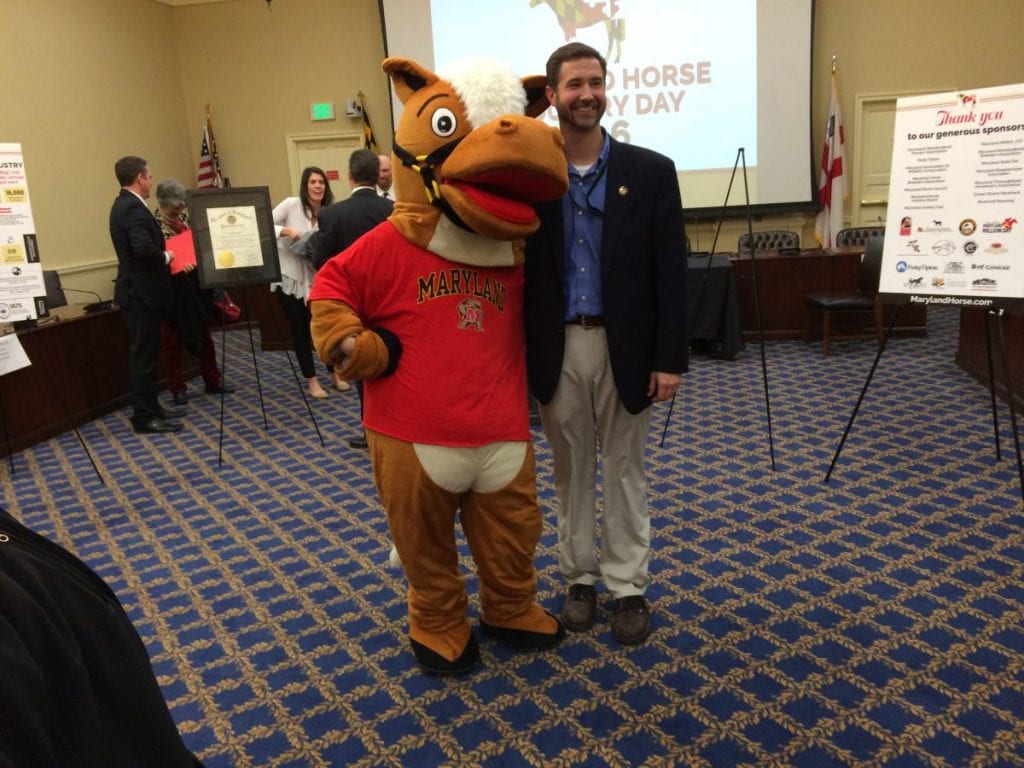 Terpretariat and friend. Photo by The Racing Biz.

They came to Annapolis by the dozens from every corner of Maryland, and every facet of the equine industry.

And not just to see “Terpretariat,” the University of Maryland Equine Studies mascot, who also was in attendance.

There were the Thoroughbred folks and the standardbred people.  Miss Maryland High School Rodeo Queen Madison Iager and her sister Miranda, president of the Maryland High School Rodeo Association, were in attendance (high school rodeo in Maryland – who knew?)  And that’s to say nothing of Lothian resident Barbara Smith, who also was there; she was the ninth-place finisher in the 2014 Mongol Derby, a 640-mile race aboard Mongolian ponies, which took Smith eight days to complete.

It was quite an array of horse interests, and they arrived with a simple message for the state legislature.

“This is our kickoff to show the legislature how important the horse industry is,” said Jim Steele, president of Maryland Million, Ltd., which was one of the 14 horse organizations to put the second annual Horse Industry Day together.

“We are one unified voice,” added Dr. Kathy Anderson, the Fair Hill-based veterinarian who is president of the American Academy of Equine Practitioners.

The attendees gathered for an issue briefing and press conference, followed by visits with legislators.  “I think the point is to show value and to start to engage better with the people in power,” Anderson noted.

And those people in power seemed to be paying attention.  A number of them — including three cabinet secretaries, Senate President Mike Miller (D-Prince George’s), and Senate Minority Leader J.B. Jennings (R-Baltimore/Harford) — came to one or more of the events.

“You guys are fantastic,” Delegate Seth Howard (R-Anne Arundel) told the assemblage.  “The jobs, the tens of million of dollars, the open space — I appreciate absolutely everything that you do.”

The spiffy fact sheet handed out pointed to the 80,000 horses from more than 40 breeds living in Maryland, the 587,000 acres dedicated to the equine industry, and the $1.6 billion in state economic impact from equine activities.

But it was the cooperation of the different facets that was most critical.  And it was something that perhaps wouldn’t have happened just a few years ago, when industry in-fighting, and disagreement among different segments of the equine industry, might have sent everyone off to their own corners.

“I think, frankly, a reality check [spurred the cooperation],” Anderson said.  “In order to survive, we need to work together as a group. I think it became pretty obvious that the Maryland horse industry was in trouble, particularly during the 2007-2010 period when the national economy was in trouble.  I think that we recognized that we had lost a significant portion of breeding, a significant portion of racing — there were a lot of issues.”

That there were, and fissures within the industry were among them — something that Sen. Jennings referenced in his speech to the press conference.

But today, Jennings said he sees something different: “an industry that’s starting to revive itself.”

Of course, the advent of slot machines, and the millions of dollars they provide to purses, breeding, and racetrack facilities have been a key part of that for the Thoroughbred industry.

But the increased cooperation — exemplifed by the industry’s “10-year deal” between the horsemen and the racetracks — is another key part.  And events like Horse Industry Day can be yet another.

For a variety of reasons, the Thoroughbred industry hasn’t always made the best use of its most important political resource: its people.  Yet while it seems almost implausible in our increasingly polarized political world, the truth is that legislators do pay attention to what the folks back home think and want.

In other words, while it’s useful if your delegate knows of the horse farms in his district, it’s a lot better if he knows the horse farmers themselves.  And that, in the end, is what Horse Industry Day seeks to accomplish.

“I think this is the tip of the iceberg,” Anderson said.  “I think today will only be the start.  I don’t think today’s going to move mountains, but I think if you do this over a greater period of time, it will register.”

Or, as Department of Natural Resources Secretary Mark Belton put it, “Together, we’ll ensure that the future is bright for our state’s horse industry.”