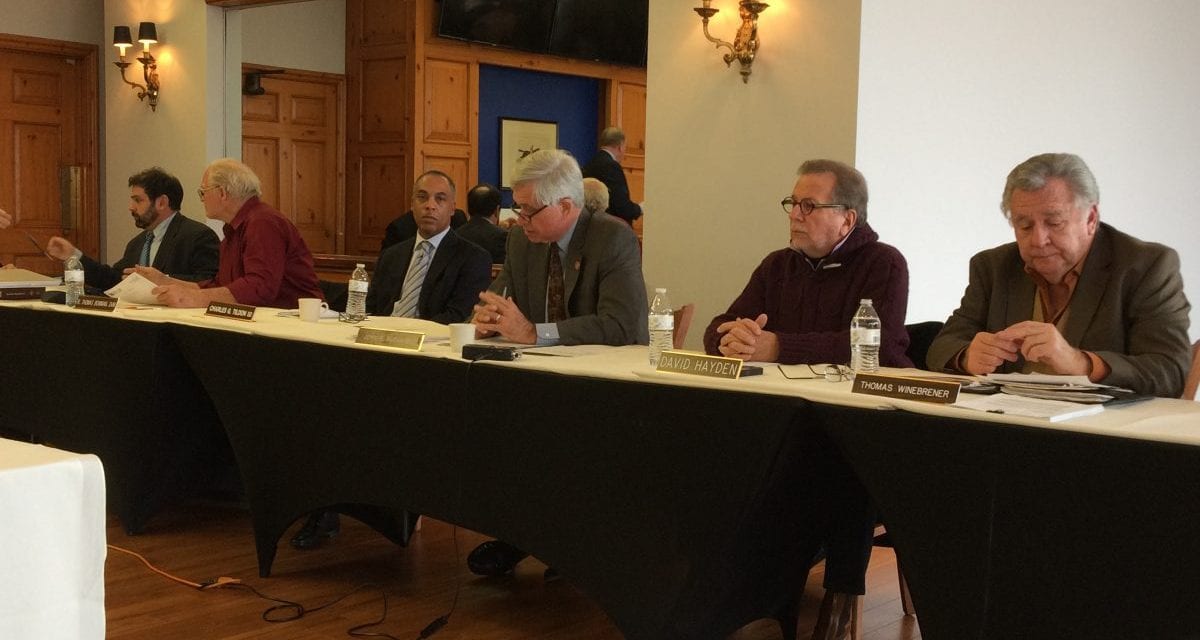 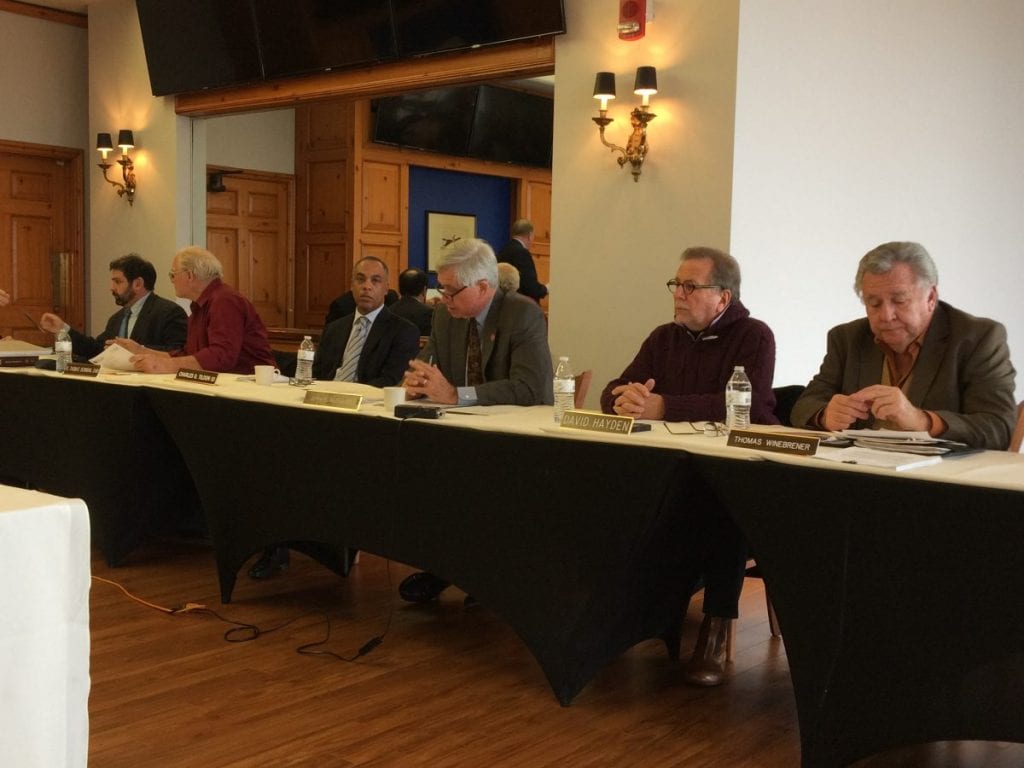 Members of the Maryland Racing Commission at today’s meeting.

For the second time in recent days, the Maryland Racing Commission today put off voting on a proposed off-track wagering facility (OTB) at the state fairgrounds in Timonium.

Commission chairman John McDaniel pledged the the Commission would render a decision “by the end of the week.”

“We’re not going to take any more testimony,” McDaniel said, following the meeting, which was the Commission’s regular monthly gathering.  “As a matter of fact, we can’t deliberate any more.  We just have to vote.”

The Timonium project would place an OTB in the second floor of the existing racetrack grandstand and was assumed by many in racing to be something of a no-brainer.  It has instead engendered passionate community opposition.  More than 300 people, about 60 percent opposed according to a count of those who signed up to testify, turned out to the Commission’s hearing last Thursday, with the boisterous crowd alternately cheering and heckling speakers.

Opponents of the project last Thursday peppered the Commission with a variety of concerns, driven in part by a feeling that the process itself had been excessively secretive and in part by a concern that the facility would simply be a precursor to a casino at the fairgrounds.

McDaniel today cited two major reasons for again delaying the vote.  For one thing, county councilman Wade Kach is hosting a meeting tomorrow involving representatives from the project and a handful of community leaders.  For another, he pointed to “the fact that all the paperwork, legal and otherwise, is on the way but some hasn’t been received today.”

“So to do it the right way, mostly as it relates to the community, attempting to be very open and transparent, giving them another opportunity” to be heard, McDaniel explained.  “The meeting tomorrow night is a tremendous opportunity and could be a chance for healing.”

Sal Sinatra, president of the Maryland Jockey Club, which is partners with the State Fair in the project, said that, while he was disappointed with Commission’s decision to wait, he was looking forward to the community meeting tomorrow.  “If it makes the community more comfortable, we’re all in this together,” Sinatra said.  “As long as we’re talking, that’s a good thing.”

Bill Marlow, a longtime board member of the State Fair and Agricultural Society, the nonprofit which owns the fairgrounds and operates the State Fair, said that he was “not really” disappointed with today’s outcome.  “I think it goes to community confidence in what they’re doing,” he said, “waiting for every one to be able to comment on it.”

He said that the facility could open almost immediately once the Commission and Baltimore County give their final approvals.

Both Marlow and Sinatra said that they did not want to see a casino at the fairgrounds.

“The Maryland Jockey Club’s intent of the facility is strictly for horse racing,” he told the Commission.  “We do not support a casino there.”

Sinatra said he had had a letter to the community drafted putting in writing that the company would not seek a Timonium casino, and that he was “hopeful” that the community would use it as “a working document.”

And Marlow said that his organization had “indicated that we support” the MJC’s casino position and would be willing to put that in writing.

While some of the required permits are currently pending — which Marlow described as seeming “like a never-ending process” — Marlow said that the Society was confident that it had followed all proper steps and that the property’s zoning would permit the OTB there.

Given those steps, Alan Foreman, general counsel to the Maryland Thoroughbred Horsemen’s Association, which supports the project, urged the Commission to approve the project contingent on whatever conditions it would like to see met.  Many observers had thought would be the Commission’s path.

But McDaniel said there was “no reason, we feel, that we can’t postpone this for a day.”

And if the community meeting doesn’t go well?

“That’s outside of our control, but at least they’ve been given an opportunity to give input,” he said.  “Waiting for the meeting to take place is the right way of doing it.  You’ve got to live in that community.”