Jockeys brave the elements (but get cold toes) 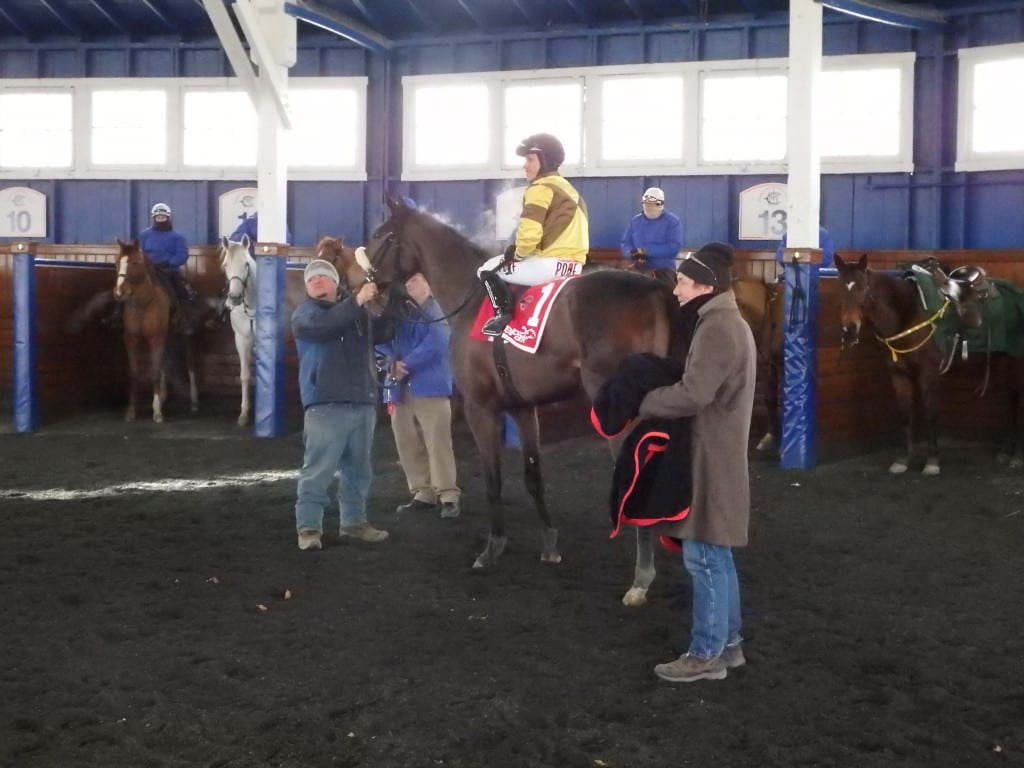 On Saturday, a day when several East Coast tracks canceled live racing amid the frigid temperatures and fierce, gusty winds — and when people who turned out did so bundled up in layer after layer of extra clothing — the jockeys who won Laurel Park’s three stakes braved the elements without the recommended additional clothing.

In fact, other than wearing a light cotton mask over their mouths and noses, long johns and perhaps an extra pair of socks, the triumphant stakes jockeys, Jevian Toledo, Jose Ortiz and Kendrick Carmouche, donned only their normal riding attire of thin gloves, light riding boots and a chest protector. All three said that any additional clothing would have been detrimental to their abilities to remain flexible atop their mounts.

In his last of three mounts on the day, all of which came in the three consecutive stakes carded on the latter portion of the program, jockey Kendrick Carmouche steered Dancing House to a two-length score in the Grade 2, $300,000 Barbara Fritchie Stakes for fillies and mares. A five-year-old daughter of Tapit trained by Kiaran McLaughlin for Godolphin Racing, Dancing House had been second with Carmouche aboard in her previous outing behind La Verdad, the Eclipse Award winner as champion distaff sprinter in 2015, in the Interborough Stakes at Aqueduct five weeks earlier.

“I’m glad to know that the track management and the race office is looking out for us,” Carmouche said in the jocks’ room after the Fritchie. “A lot of tracks canceled today, but I’ve ridden on colder days in New York. The best part was we didn’t have to leave the paddock and go out onto the track until about three minutes to post. You don’t have much chance to get that cold. My hands are fine, but my toes are really cold and they’ll need some time to warm up.”

Throughout the nine-race card at Laurel Park on Saturday the horses stayed in the paddock until roughly three minutes to post time, when jockeys darted from the jocks’ room and then got a leg up on their mounts from trainers. Temperatures throughout the day hovered in the low-20’s, but stinging winds from the north quickly sent wind chills into the single digits and even below zero. Even Laurel Park racing secretary Georganne Hale remarked that the riders deserved a medal for braving the frigid elements on Saturday.

“We’ve had days in New York where it gets colder,” said Jose Ortiz, who guided Kid Cruz to a determined victory as the even-money choice in the $75,000 John B. Campbell Handicap. “You can wear a mask and long johns and maybe extra socks, but you can’t ride with an extra pair of gloves. You would not be able to steer the horse as good. You’re only on the track for four or five minutes on a day like today. But if you’re on the best horse, you just ride your race and hope to get to the wire first.”

Jockey Jevian Toledo, who steered Pangburn to a neck victory in the 25th edition of the Maryland Racing Media Stakes for fillies and mares, overhauling Joint Return and Caramouche in the final 100 yards, did not think the elements were extreme or overwhelming. Toledo, who later finished second aboard Clothes Fall Off to complete a McLaughlin-trained exacta in the Fritchie, had also won a one-turn sprint for $5,000 claimers with Gator Gold one race before climbing aboard Pangburn for the Maryland Racing Media Stakes.

“I always put on long johns on a day like today,” Toledo said. “But I don’t wear any extra gloves or socks. If you wear too much, you can’t move around as much. Your feet get colder than your hands, but you get used to it and try not to think about it. When the gates open you just ride your horse and hope for some luck. You can’t really change anything. If you give the horse the best chance to win you just ride hard and not worry about how cold it is.”

Carmouche started his day by finishing second aboard Joint Return in the Maryland Racing Media then guided Golden Glint to a fourth-place finish in the Campbell. But those two mounts gave him enough of an education to understand how the track was playing and how much the elements might affect him once he left the paddock aboard Dancing House and waited for the gates to open in the Fritchie.

“The track really was in great shape,” Carmouche said. “They did a good job keeping it safe. When you leave the paddock and make the walk over to the gate, you don’t have much time to think about the weather. Even the winds were not a big, big factor except for the far turn. You just have to ride your race and hope the horse gives you its best when you ask it to run. I love riding for Kiaran. I know his horses are going to be ready no matter what the temperature is.”