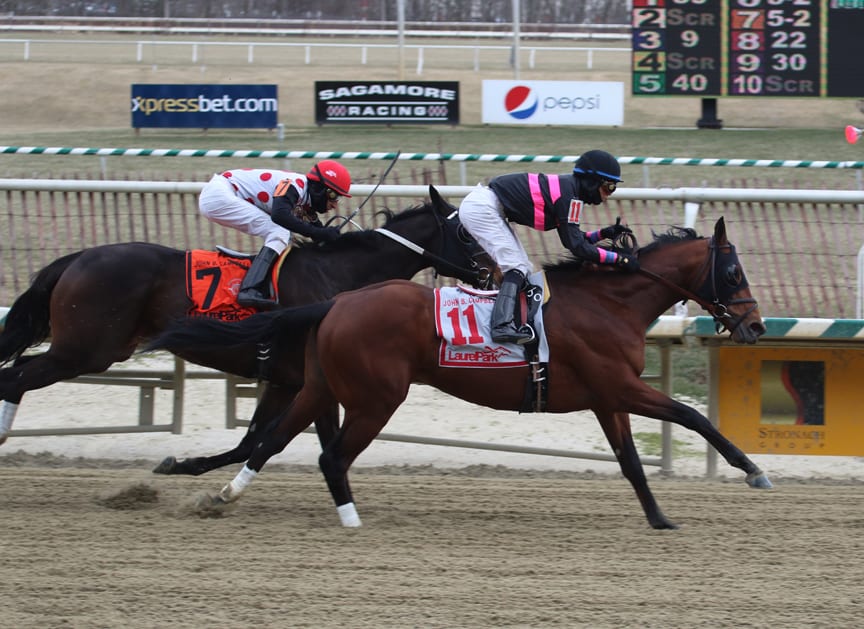 Kid Cruz, winless since taking the Dwyer Stakes (G3) at Belmont in July of 2014, drove three-wide down the stretch to win the $75,000 John B. Campbell Saturday at Laurel Park by a half-length over Souper Lucky.

A 5-year-old son of Lemon Drop Kid trained by Linda Rice and ridden by Jose Ortiz, Kid Cruz covered the 1 1/8 mile in 1:52.98. It was Kid Cruz’s sixth win in 18 starts. The 7-5 morning-line favorite Page McKenney was scratched Saturday morning from the Campbell and will now run in Monday’s General George (G3).

Since winning the Dwyer, Kid Cruz finished second four times in 2015 after finishing third in the Jim Dandy (G2) and fourth in the Travers (G1) in 2014. The 5-year-old’s previous two trips to Maryland resulted in a victory in the Tesio and eighth-place finish in the Preakness (G1) in 2014.

“He had a few issues in the past years that seem to be resolved,” said assistant trainer Samantha Randazzo. “We’ve been pointing toward this race and Jose rode a very good race on him. The rider did an excellent job.”

While Kobel set fractions of :25.32, :49.84 and 1:14.21, Ortiz raced fourth before slowly moving up on the outside. Although Souper Lucky got a short lead in the upper stetch, Kid Cruz drove to the lead inside the sixteenth.

“This horse is very lazy,” said Ortiz of Kid Cruz. “I knew that I had to ride him all the way. I had to start moving at the three-eighths pole instead of waiting. I know the horse well, and that really helped.”