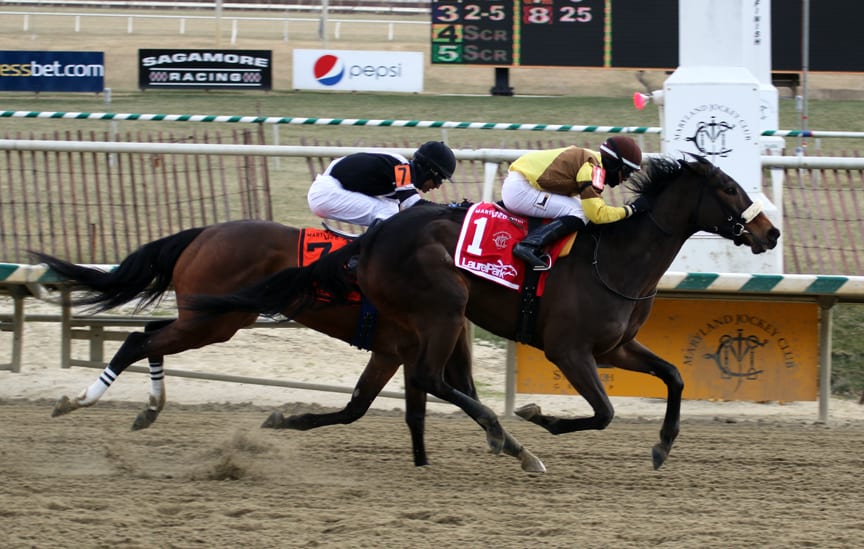 Shortleaf Stable’s Pangburn, trained by Anthony Dutrow and ridden by Jevian Toledo, drove four-wide entering the stretch to win the $75,000 Maryland Racing Media by a half length over Joint Return.

Seventh in the Cotillion (G1) and ninth in the Comely (G3) last year, Pangburn ended her 3-year-old season with a fourth-place finish Dec. 26 in the Thirty Eight Go Go Stakes at Laurel. The Maryland Racing Media was her 4-year-old debut.

Fourth into the first turn and down the backstretch, Pangburn rated behind 2-5 favorite Mei Ling, who set a leisurely pace of :25.11, :50.28 and 1:16.03. Around the final turn, Toledo moved four-wide before driving by her opponents down the stretch.

“I stayed behind the speed just like the assistant trainer told me, and when we got to the top of the stretch she started to run,” said Toledo. “I didn’t have any problems in the race.”

Jose Ortiz, who rode Mei Ling, said; “We were in good position through the race, but when the other horses went by we couldn’t stay with them.”