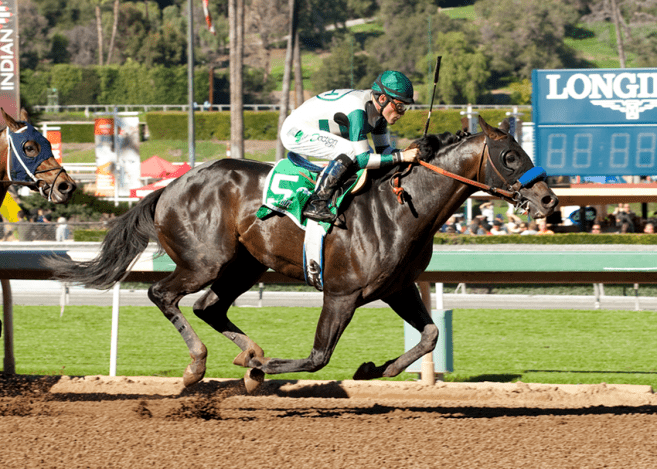 From a Santa Anita Park release

Trained by Bob Baffert, who saddled his record sixth Lewis winner, the Pennsylvania-bred colt sat a perfect trip in behind dueling leaders I Will Score and Uncle Lino around the far turn, and Stevens waited to call upon the long-striding son of Eskendereya leaving the furlong pole and won easily.

“I actually got there (to the lead) quicker than I wanted to,” said Stevens. “I was loaded going into the stretch. He’s pretty special and I’m looking forward to facing more competition. He wasn’t even blowing after the race…I haven’t got close to finding the bottom of him yet and that’s a good feeling. He seems to do just enough of what’s in front of him, he likes a target. I think as he faces better horses, he’ll only get better.”

Mor Spirit was bred in Pennsylvania by the Elkstone Group, LLC.  He is out of the graded stakes placed Dixie Union mare I’m a Dixie Girl.

Off at 3-5 in a field of six, Mor Spirit paid $3.40, $2.40 and $2.10. Owned by Michael Lund Petersen, Mor Spirit followed his win in the Grade I Los Alamitos Futurity posting his third win from five starts. With the winner’s share of $90,000, he increased his earnings to $378,400 and most importantly, picked up 10 all-important qualifying points to start in the Kentucky Derby on May 7.

“He has that long stride, but in the mornings, he’s not a very good work horse. He’s sort of lazy…They were two really nice horses (Uncle Lino and I Will Score)…It makes the race even more interesting in that he’s able to collar those horses.”

When asked what might be next for Mor Spirit, Baffert replied, “I don’t know. We know he’ll go on a plane to go somewhere, but right now, I’ll just go by how he’s doing. It’s just too far ahead.”

“I’m very happy, he ran good,” said Sherlock. “The pace scenario dictated what we had to do what we did today…We’ll move forward off of this. He won’t be leaving here. I don’t have to go anywhere, there’s a million dollar race four hundred yards from his stall (Grade I Santa Anita Derby on April 9).

Ridden by Mike Smith, I Will Score was making only his third career start and was also trying a route of ground for the first time.

“He ran really well,” said Smith. “The winner’s a really good horse. He’s definitely on the Derby Trail. He’s definitely that kind of horse. So we got beat by some good horses…He’s probably better off sprinting because he’s naturally quick. In saying that, he didn’t run bad.”

The second, third and fourth (Dressed in Hermes) place finishers picked up four, two and one Kentucky Derby qualifying points.