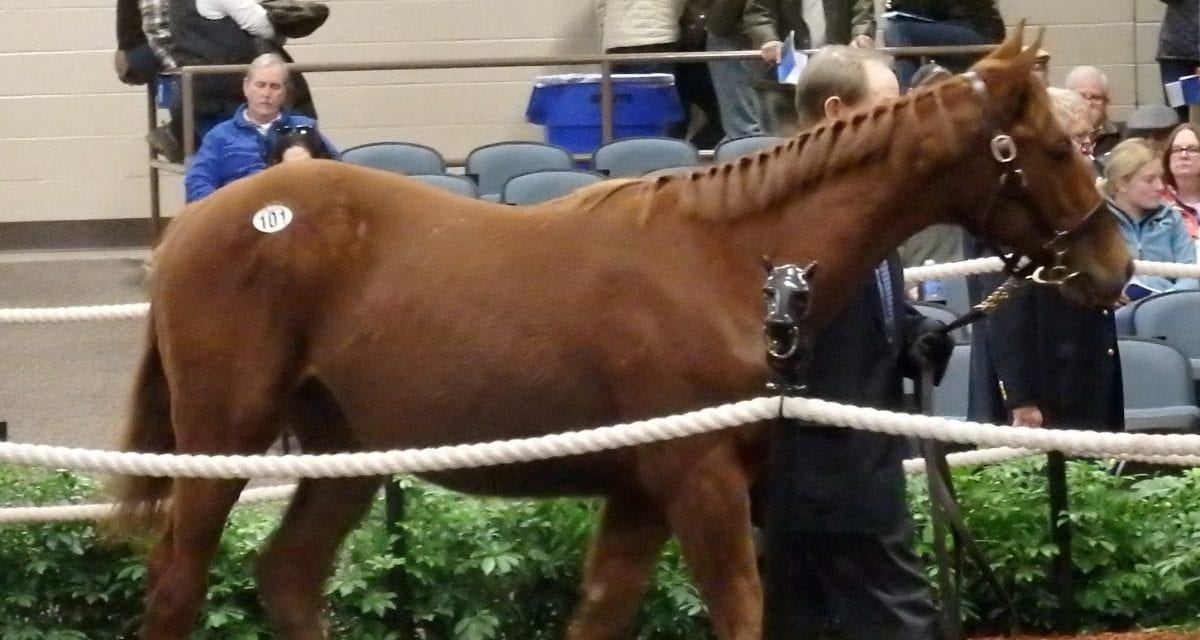 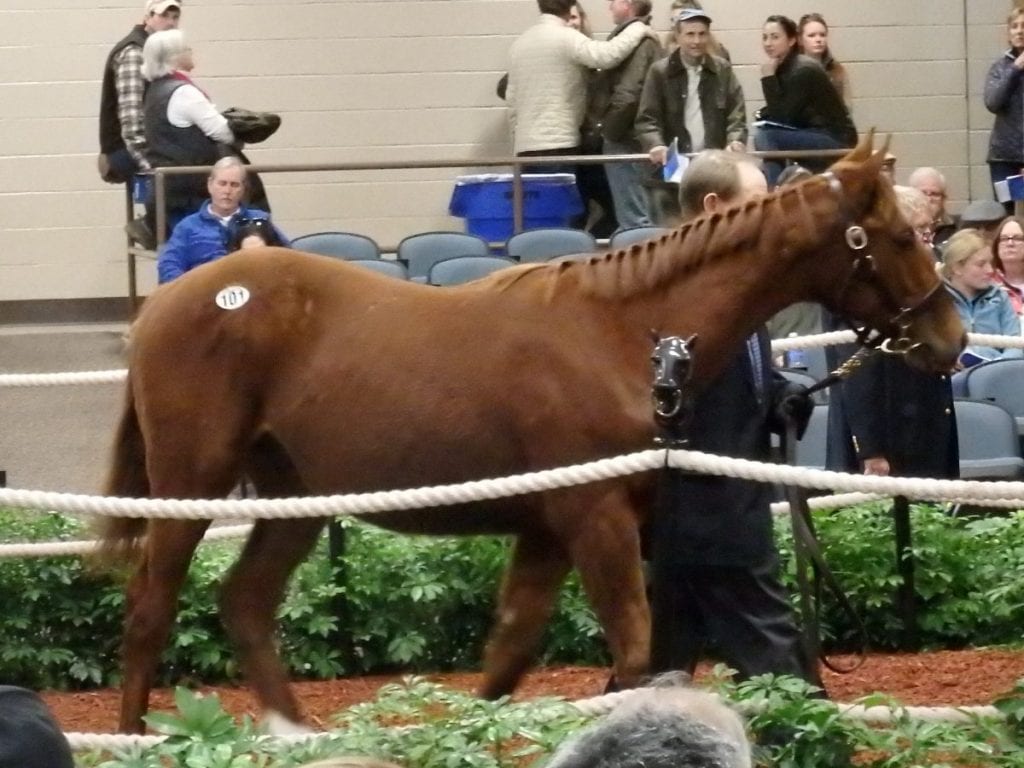 Horses bred in the mid-Atlantic region accounted for the lion’s share of hips sold in yesterday’s Fasig-Tipton Midlantic Winter Mixed Sale at the Timonium Fairgrounds, including the top five racing prospects purchased.

Overall, the event, with 27 percent fewer horses offered, saw gross sales fall just eight percent, to $878,100.  Although the average was off by 2.7 percent, the sale made up ground as the rate of buybacks dropped precipitously.  While fully a third of horses offered in the December 2014 sale — the event was moved to late January on an experimental basis — did not find a purchaser, this year only 16 of the 120 horses to go through the ring failed to leave with a new owner.

“We’ve proven that people get runners out of this sale,” said Fasig-Tipton Midlantic sales director Paget Bennett.  “You can’t not come to see what’s here.”

Thirty-eight horses bred in Maryland were sold at the sale, comfortably more than in any other state, with total sales of $273,200.  Maryland was followed by Kentucky (22 horses sold) and Pennsylvania (20).

The top Maryland-bred racing prospect to sell was Hip 116, a bay filly by Tiz Wonderful out of the graded stakes-placed Cuvee mare Dancing Anna.  Consigned by Bill Reightler, she fetched a top bid of $42,000 from Matthew Schera.

Yet it was a Pennsylvania-bred who topped the sale.

Hip 101, a chestnut colt by Curlin consigned by Marshall Silverman, brought a winning bid of $76,000 from Machmer Hall.  He is out of the winning Housebuster mare Thrill Seeker and hails from a female family that includes names familiar to regional racing fans — Aggadan, Forry Cow How, Love You Madly, Original Gray — as well as graded stakes stars like Miesque’s Approval.

“He was the only major-sired horse in this entire catalog,” said Machmer Hall’s Carrie Brogden.  “I thought he was big and stretchy and beautiful, and I loved his sire.”

Reightler, who led all consignors with 36 horses sold and $364,700 in sales, consigned the top broodmare or broodmare prospect to sell, a Malibu Moon mare named Moon Orbit who sold as Hip 15 and brought a winning bid of $65,000 from Susan Casey.

Moon Orbit, who is unraced, is out of the stakes-placed Red Ransom mare Lucinda K. and is a half-sister to graded stakes producer Here Comes Lucinda, the dam of Grade 1 winner Stormy Lucy.

“I thought it was a very good price for the mare,” said Reightler, who called her “a logical suspect to top the mare section of the sale.”

Reightler also consigned Hip 22, a mare sure to stay locally.  Oriental River, part of the dispersal of the estate of Howard and Sondra Bender, was purchased by Ellen Charles’s Hillwood Stable LLC for $35,000.  Making the buy more attractive, Oriental River is believed to be in foal to Bandbox — a Grade 3-winning stallion Charles raced who now stands at Northview Stallion Station.

“She’s a really nice mare,” said Charles, who said she owns eight mares.  “I have shares in a couple other [studs], and she works with them, too.”

Among the other states in the region, the top sellers were: