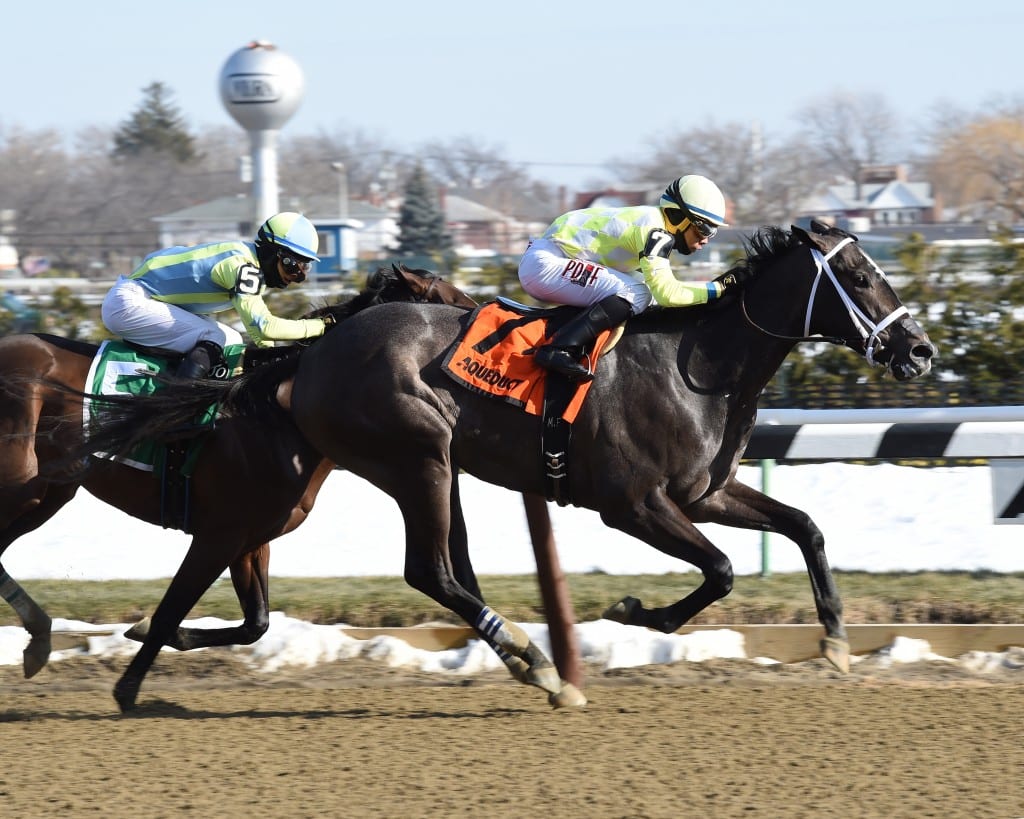 Trainer Jason Servis said he was confident in Sunny Ridge’s chances heading into Saturday’s Grade 3, $250,000 Withers, but he felt even better when he saw the 3-year-old Holy Bull gelding enjoying a perfect trip down the backside at Aqueduct Racetrack.

With Manny Franco aboard for the first time, Sunny Ridge broke sharply, and then settled in second, just off Vorticity as he led the field of six through moderate early fractions of 24.56, 49.81 and 1:14.70. Tipped to the outside on the far turn, Sunny Ridge drew alongside the pacesetter once into the stretch, and dug down to gain the advantage a furlong out, hitting the wire three-quarters of a length in front.

Now the New Jersey-bred son of Holy Bull is front and center in the Triple Crown conversation, and his 18 Derby points put him third on the leaderboard.

“I didn’t want to jinx myself but I really felt good about the horse [coming into the race], I really did,” said Servis. “I’m a little superstitious and I like to play it down but I felt good … it seemed like no one was wanting to be on the lead so I was happy on the backside. I’m sitting second and I know Irad [Ortiz, Jr. aboard 1-2 favorite Flexibility] is on the inside and he’s got work to do, so I was feeling pretty good.”

“Heading into the race we wanted to be close to the leader,” said Franco. “We knew our horse has a lot of speed. Thankfully, the race set up for it to unfold that way and we took it from there and it worked out good. He’s a real grinder, he has one pace and likes to run all day. I definitely like him going further.”

Adventist persevered to finish third, a length back, with Grade 3 Jerome winner Flexibility checking in a non-threatening fourth. Donegal Moon and King Kranz completed the order of finish, with Cards of Stone scratched.

It was the third victory in six starts for Sunny Ridge, who carries the colors of Dennis Drazin. In addition to a maiden victory, he won the Sapling at Monmouth Park and also finished second in the Grade 1 Champagne and the Grade 2 Delta Downs Jackpot Stakes.

Sent off as the 7-2 second choice in his first start as a 3-year-old, Sunny Ridge returned $9.50 for a $2 win bet and earned $150,000 as well as 10 points on the “Road to the Roses” qualifying system for the Kentucky Derby. Servis said Sunny Ridge would be nominated for New York’s next two prep races for the spring classics, the Grade 3, $400,000 Gotham on March 5 and the Grade 1, $1 million Wood Memorial on April 9, but would likely run in one or the other.